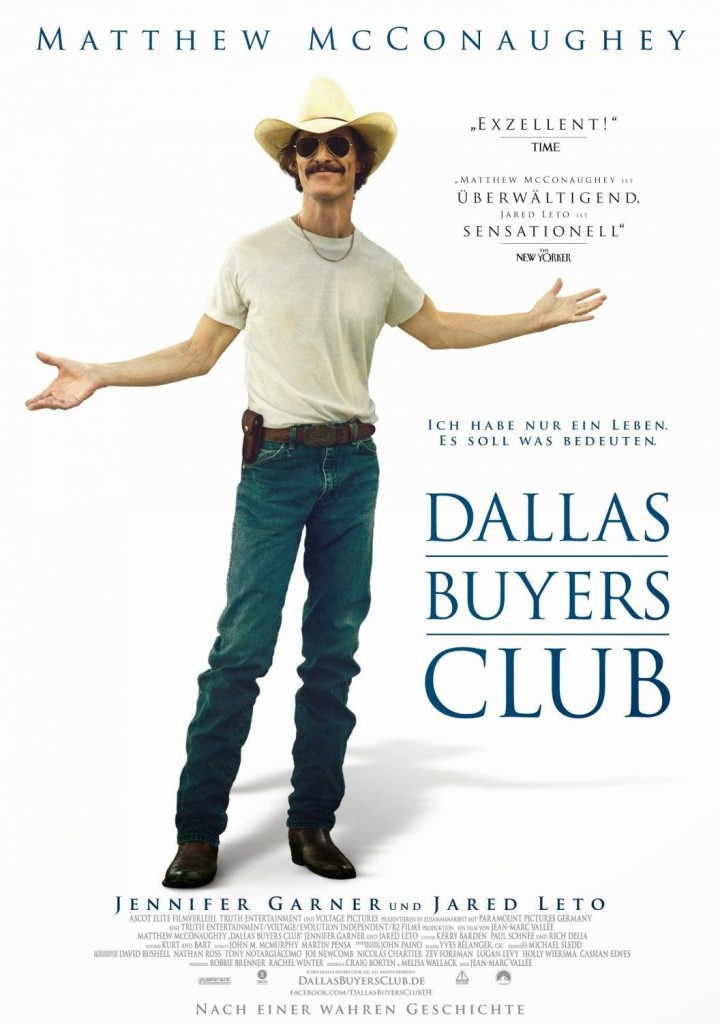 I thought the “Dallas Buyer’s Club” was about Jerry Jones and the Cowboys. I found out it’s about another cowboy named Ron Woodroof (Matthew McConaughey from “Mud”) who blazed his own trail in the 1980s.

In 1986, he was your standard redneck, good for nothing, day-to-day working electrician until he was diagnosed with HIV. The fact he got it through heterosexual sex did not seem to matter to his immune system. To be clear, Ron did not get Magic Johnson AIDS. He got the full-blown, Freddy Mercury, Rock Hudson, cut-you-down-to-the-bone AIDS. His friends, with their hate and ignorance, treat him like a leper.

He was given 30 days to live, and instead of giving up he went to this place called a “library” to find some answers. With the FDA and American doctors on their heels, his search for treatment led him to Mexico. There he finds Dr. Vass (Griffin Dunne from “Broken City“), who does not nurse at the teet of big Pharm Americana style and their wonder drug AZT.

It seems all these wonderful medications from Mexico are not illegal; they just don’t have the FDA stamp of approval. Ron only cares about staying alive and the proof is in his pudding of vitamins, proteins and enzymes. So he hooks up (business-wise) with AIDS stricken Rayon (Jared Leto from “Lonely Hearts”) and starts the Dallas Buyer’s Club. It’s an almost legal way to get these drugs to people who need them, as membership has its privileges.

You see, Ron was not book smart, but he was street smart. And those are the skills that made a difference. That and not letting anyone, anything or any law stand in his way. He does everything possible to live. In fact, he does not stop there; as he actually does things nobody thought was possible. He did not do this for fame or pride but merely for the rights of him and his fellow diseased patrons to live.

This film is such a moving example of the human condition. With an Oscar-worthy performance from McConaughey, we see a man evolve in the way he sees people and his place in the world. While much has been said about McConaughey’s weight loss, I think Jared Leto even tops that. I understand he lost 39 lbs., but he did not have it to lose. If I lost 39 lbs. people would just ask if I got a haircut.

I saw this movie a few days ago and have been trying to think of a reason not to give it 5 stars. This movie did not preach, yet represents the best sermon I have ever seen on the human condition. So I say unto thee, I hereby give this movie 5 out of 5 stars. Join the club, and find out what life is really all about.

Here is a link to his movie review site: http://bashmovies.wordpress.com/