In the Boyle family, “everyone had to do at least six months of Irish dance,” said Alannah Boyle Sweeney, of the Boyle School of Irish Dance. She and sister Ellen Boyle Gibbons have owned and operated the certiﬁed Irish dance school since 2000.

Sweeney and Gibbons and their six brothers are the children of Irish immigrants. The family spent their childhood in upstate New York, where the sisters cultivated their craft from the ages of four and ﬁve. They were regional and national champions in American and Canadian competitions and qualiﬁed on multiple occasions for the World Championships, which take place every Easter in Ireland. To this day, just by talking with them one can feel the passion they have for dance. And so it should come as no surprise that they have chosen to share their love of Irish dance with others who are also driven to learn its intricate yet energetic pace.

When Sweeney was a senior in high school, her older brothers were moving in the Northern Virginia direction and the rest of the 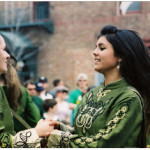 family followed. She attended Seton High School in Manassas her senior year and, to make extra spending money, turned to what she knew best—Irish dance. A few parents at Seton had approached her to teach their children, and it was from there that the idea for the Boyle School of Irish Dance began to sprout.

During the day, Sweeney worked as a lobbyist on Capitol Hill and Gibbons continued working at Georgetown Hospital; both taught Irish dance in the evening. Parents who knew about the sisters’ championship background in Irish dance, though, continued to seek out Irish dance lessons from the sisters for their children.

Sweeney and Gibbons opened the Manassas school in the fall of 2000 on a part-time basis, but they soon saw the need for expansion. They opened schools in Alexandria and Chantilly in 2002, and by 2004, the schools began operating full-time.

“We never expected the demand for it; like you could actually make a living,” said Sweeney.

A fourth location opened in Herndon this past year—at the same time that the Manassas location was moving to the Hylton Performing Arts Center.

Gibbons and Sweeney make every eﬀort to rotate the class facility so students coming from the northern locations get a reprieve from traveling a distance to class. However, the Hylton location is the most scheduled-for class, at a minimum of twice per week. They love the facility and the opportunity it presents for their dancers. Sweeney said they are very fortunate to be in the Hylton Performing Arts Center. It gives students the closest experience to a competition venue, she said.

“The ﬂoor is unbelievable. It’s as big as a World Championship ﬂoor.” Sweeney exudes excitement as she explains the beneﬁts to the dancers. “It’s just a great ﬁt.”

The Boyle School of Irish Dance currently has 500 students, including 40 boys, and a waitlist. Due to limited capacity, they have decided against teaching adults. The dance students come from across the Northern Virginia region to study with the Boyle sisters. One student even makes the trip to the school from Charlottesville, Va.

The school teaches three diﬀerent class arrangements: regular skill- focused classes, show classes and competition class. The Boyle School of Irish Dance is a competitive dance school but the regular skill-focused classes allow a dancer to concentrate on learning the same material as a champion without being concerned about competing. All dancers take skill classes. Show classes divide students into teams that prepare for a minimum of three performances each year as well as parades, special events and recitals. “The best time to start a child in Irish dance lessons is between the ages of ﬁve and eight,” oﬀered Sweeney.

There are currently 37 dancers in the Boyle School competition classes. The competition classes intensely train for regional, national and international championships. These dancers attend class three nights each week and devote a minimum of 10 hours during the week to hone their skills. On April 14, dancers from the Boyle School of Irish Dance will compete in the World Championships  in Dublin, Ireland. Ten of these students are from Prince William County and four are from Fauquier County. And, it seems skilled footwork remains a family trait. Gibbons’ eight-year-old son recently won a regional championship; Boyle School’s ﬁrst.

Not only will Boyle School of Irish Dance students be a highlight at the World Championship; Sweeney and Gibbons will be as well. The Boyle School is a certiﬁed Irish Dance School by An Coimisiun le Rinci Gaelacha, in Dublin, Ireland, and the Boyle sisters are both certiﬁed teachers and have recently passed certiﬁcation to be An Coimisiun adjudicator judges. In discussing these certiﬁcation processes, there is no question that the students they teach receive a quality education in Irish dance and they hold the highest integrity of the art they teach.

To become a certiﬁed Irish dance teacher there is a ﬁve-part exam that requires that one understand music and timing, written dance theory, and practical “caeli,” or dance with self-choreographed arrangements. Those who earn certiﬁcation as instructors must also show the ability to teach traditional dances to children before a panel review, and teach beginners as well as champions for panel review.

Those who wish to be judges must have been Irish dance teachers for a minimum of two years and succeed in the ﬁrst three teacher exams of music, written dance theory and dance—a second time. Additionally, there is a math and scoring component and judging of a mock competition where adjudicator candidates are interviewed by the panel regarding their competition scoring method. Gibbons and Sweeney will be presented their adjudicator status and an award at this year’s World Championships.

So what do these dancers do with their intense training after they have gone beyond student status at the Boyle School of Irish Dance? Many former students have been hired by the Boyle School to address their class capacity. A few have gone on to study Irish dance at the University of Limerick. Those who are 18 years of age and older have become part of Busch Gardens’ international show or audition for Riverdance. The Boyle School of Irish Dance has also provided opportunities such as performances in the Key Largo Irish Fest, Wolf Trap and other distinguished venues. This year, four dancers will travel to Key Largo to perform on March 12 at the popular event. Three of the past four years, Sweeney and dancers   “of age” from the Boyle School had the opportunity to perform aboard the Carnival line of cruise ships as they sailed through the Caribbean.

This year is just as busy as any other. The Boyle School of Irish Dance has entered 12 dancers into the All Ireland Championship in Killarney; 14 dancers are going to the World Championship in Dublin, Ireland in April; 25 students will compete in the North American Championships in Nashville; and the school will host an annual recital at the Hylton Performing Arts Center the ﬁrst week of June.

In the meantime, one can deﬁnitely catch teams of dancers throughout the Northern Virginia region during the month of March in celebration of St. Patrick’s Day. Forty-ﬁve local performances are scheduled in March; most surrounding the Irish holiday. On March 12, a team will entertain at the Old Towne Sports Pub in Manassas. Dancers from the school will perform every night from March 11–17 at Finnegan’s in Herndon. Four teams of dancers will host St. Patrick’s Day patrons on the evening of March 17 at Ned Divine’s in Sterling and Herndon, Potomac Point Winery in Staﬀord, Va., and McMahon’s in Warrenton, Va.

More information about locations, classes and competition frequently asked questions can be found by visiting the Boyle School of Irish Dance’s website at www.boyleschool.com.

A nonproﬁt development director for 10 years, Jennifer Rader now works as a freelance writer and consultant. She lives with her son and husband in Manassas  and can be reached at jrader@princewilliamliving.com..