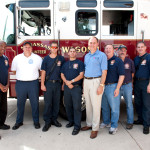 Fighters Local 2598 of the International Association of Fire Fighters (IAFF).

Local 2598 represents over 400 members of the Prince William County Department of Fire and Rescue.  It includes firefighters, paramedics, dispatchers, and support staff.

The membership of Local 2598 voted in their monthly meeting to endorse Del. Anderson in his re-election to a third term in the Virginia House of Delegates.  Since 2010, Anderson has represented the 51st House District in the Virginia General Assembly.  The District covers much of Prince William County and stretches from Occoquan in the east to Nokesville in the west.

In the Association’s letter of endorsement, Erik McCoy, Secretary/Treasurer of the Prince William Professional Firefighters, noted that “we wish [you]good luck in your campaign and look forward to seeing you in Richmond!”

The endorsement of Prince William County’s Professional Fire Fighters complements broad support that Anderson has had from Virginia’s community of public safety professionals.

Recently, John W. Jones, executive director of the 8700-member Virginia Sheriffs’ Association, thanked Anderson for “the solid bond and spirit of trust that you have developed with Virginia’s law enforcement community over the last four years…and I look forward to working at your side [in 2014].”

Additionally, Dana G. Schrad, executive director of the Virginia Association of Chiefs of Police, recently thanked Anderson and stated in a letter that “your ability to collaborate successfully across party lines and with multiple state and local agencies to reach consensus solutions is well-known in Prince William County and Richmond…we look forward to continuing our positive working relationship in the 2014 legislative session.”

After being notified of the endorsement, Del. Anderson stated that “our local firefighters are on the front lines of defending life and property in harm’s way, and I’m privileged to receive their support.”  He concluded by saying that “government’s primary function is to protect our citizens, and these public safety professionals who lay their lives on the line are some of the finest public servants in Prince William County and all of Virginia.  Their advice is invaluable to me as a legislator, and their support in this campaign is very humbling.”