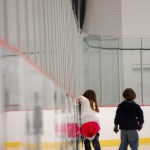 Just because the seasons change doesn’t mean that your child’s restlessness does. While the weather is cold and restricts out- door activities for children, they have just as much energy as  ever. Luckily, our community has an indoor solution for keeping children active.  For parents that are looking to give their child a re- warding experience having fun and in some cases, learning a new skill, the Prince William Ice Center is the place to go this winter.

Located in Dale City, the ice center ﬁrst opened in 1996. In 2008, current owners Bill and Pat Hutzler purchased the building, with growing the business and contributing to the community in mind. Just two years into their venture, a large snowstorm caused a complete collapse of the structure. While this could have led to the permanent closure of the rink, the Hutzlers were determined to rebuild and keep moving on with their plans. “We had to demolish the whole building and clear the site and then start from scratch. It was a trying time for us. But we felt that we should rebuild, because it’s an outstanding resource to the community and it provides quite a lot of activity and opportunity for kids and adults, so we were very glad to be able to rebuild,” Bill said.

It took just over three months to clear the site of debris, and another six months for the redesign process. After almost nine months of construction, the Hutzlers proudly reopened their doors in September 2011 and haven’t looked back since. “I think people were very excited to have the rink back in the community. We got very positive feedback and lots of support during the whole process from the community because it’s been such a tremendous resource,” Bill said of the response that he received when he and his wife reopened the rink to the public.

The now 83,000 square foot space includes two ice rinks: one has National Hockey League dimensions and the other is a slightly wider, Olympic-size rink. In addition, the facility has a pro shop, café, weight room, exercise room, ﬁtness and nutrition room, dance studio where ﬁgure skaters can practice and an entire second ﬂoor that can be used for meetings, parties and other functions.

These sessions, which typically last 7-8 weeks and cost around $120 per weekly session, provide one-on-one coaching as well as time on the ice to practice newfound skills. For more advanced students, the center also oﬀers private lessons that build skills for ﬁgure skating or hockey.

The Prince William Ice Center is the “home rink” for several hockey and speed skating teams from both recreational and competitive leagues. The rink currently hosts the Prince William Hockey Club (for ages 5-18), two junior hockey teams (ages 16- 20), teams for George Mason University and Northern Virginia Community College, and the Prince William Ice Center Adult League. This league is USA Hockey sanctioned and has teams for both men and women, as well as a co-ed team. Many youth and adult ﬁgure skaters practice at the rink, alongside three speed skating clubs. Several speed skaters have accomplished qualifying times for competitive speed skating, and while names have not yet been released, it is likely that at least one of the speedsters who practices there may qualify for the 2014 Winter Olympics. 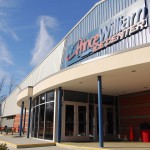 From the start, the Hutzler’s had a focus on positively impacting the community, getting involved in community events and fundraisers.  “We support fundraisers for a variety of activities, including the Toys for Tots campaign. We do Wounded Warriors charity games, a couple of those a year, and we also support fundraisers for public schools as well as church and youth groups,” Bill Hutzler said.

Members of the community love both the amenities and experiences the Prince William Ice Center oﬀers. “My 8th grade student attends what she and her friends refer to as ‘Friday Middle School Night.’ I have been very pleased with the security and rules regarding entry and exit of the building and always feel their staﬀ has her best interest at heart. The music is fun and appropriate for their age group,” said Marya Unrath, a local resident.

While the Hutzlers understand the need for a winter sports center in the community, they also know the importance of having an inviting space where children and adults can host social gatherings and just have a good time. Individuals or groups can hold events there, selecting from diﬀerent rental packages based on group size and food and beverage preferences. “The packages include a variety of things, with a menu of items that can be selected,” Bill said.

The same could be said for the Prince William Ice Center itself, with its varied levels of ice-related fun. Come to skate with the kids, nurture Olympic dreams, work on your hockey game or host your next event. Even if you only seek a cup of hot cocoa and the excitement of watching others on the ice, there is a little something for everyone at this community destination.

Stephanie Tipple is a college student, journalist and community leader. She resides in Woodbridge. She can be reached by email at         stipple@princewilliamliving.com