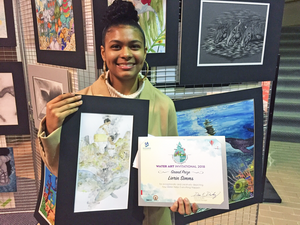 After accepting her award at the March 8 Water Art Invitational, Grand Champion Lierin Simms joked about how she almost dressed too casually for the annual event hosted by the Prince William County Service Authority.

The Colgan High School sophomore’s winning entry was no laughing matter, however.

Simms used the lack of clean water in Third World countries and the impact humans have on nature as inspiration for her thought-provoking, environmentally-themed piece. In just 45 minutes, she had sketched out three themes. Over a weekend at her grandmother’s house, those themes became a mother giving water to her son while standing on top of a trash-laden ocean filled with whales.

“I had three separate themes: whales, trash and people,” said Simms. “With the little boy on land and the pollution and trash affecting the water, it’s like one big cycle,” said Simms, whose work bested 124 other entries.

“Not only did she exhibit extraordinary technique and level of detail, but she did an outstanding job depicting the theme of Water Helps Everything Happen,” added Multimedia Specialist and competition judge Donna Woldeselassie.

Simms was one of 29 Prince William County high school students honored for their outstanding artistry. Both Colgan and Forest Park High School were well represented, combining to win eight of the top 10 prizes. Forest Park’s Avery Engstrom and Caroline Doolin won first place in the Computer Graphics and Photography, respectively, while Colgan’s Jenna Phiboonphanuvat was victorious in the Painting & Drawing category.

Other honorees included Grace Nicoletti (Colgan) and Kathryn Lewis (Forest Park) in Computer Graphics and Nargis Hashimi (Forest Park) and Paul Camacho (Colgan) in Photography. Rounding out the top 10 were Gia Lee of Patriot and Hannah Phillips of Battlefield, both of whom were recognized in the Painting & Drawing category.

Students from 11 county schools and one homeschool were recognized for their efforts on Thursday, including 19 General Manager’s Award winners.