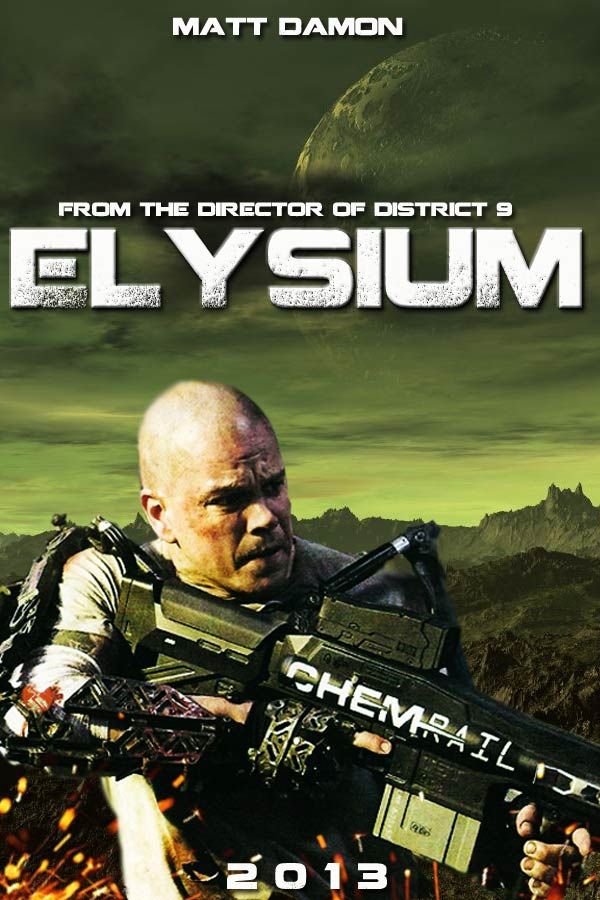 “Elysium” sounds like a prescription for a bad infection, but it’s the new sci-fi thriller opening today from Director/Writer Neill Blomkamp (District 9).

The story is set in 2154, when the Earth is all “Detroit-like” and anybody with money and connections lives on Elysium, the orbiting habitat with no humanity  for those left on Earth. Elysium is where Max (Matt Damon from We Bought a Zoo) and Fray (Alice Braga of I am Legend) dream of living. Unfortunately Max is now a reformed hoodlum and Fray is a nurse with a daughter who has leukemia.

This is a good place to mention that on Elysium everyone has a “healing bed” that fixes everything faster than you can toast a Pop Tart. So everyone who is sick wants to get up there, but it’s virtually impossible. To make sure of that, Secretary of Defense Delacort’s (Jody Foster of The Beaver) main job is to keep out the riff-raff, as they threaten the heavenly way of life everyone enjoys on Elysium.

Eventually, Max makes it to Elysium with Fray and daughter in tow. There they must fight for what they want: to save themselves and the rest of the lowly earthlings.

This movie is very plot driven and moves so fast the characters have to hold on to their super sonic seats. Although Max is our hero, he never seems to make a hard decision. He does what he has to do and not what he wants to do. There are a bunch of convenient plot points, and a guy named Spider (Wagner Moura making his US screen debut) who can hook you up with anything. In the future, always look for a guy named Spider

It looks a lot like Blompkamp’s “District 9,” as he keeps angling for a cinematic metaphor for everything that’s wrong with society. There are plenty of robots and advanced weaponry, but again, our hero must throw hands, and in this case, robot-assisted hands, to win the day.

The movie was interesting, and a decent effort at expanding an old Star Trek-style plot (see Gene Roddenberry) into a feature film. With so much of the budget going to special effects and action set pieces, we are left with little screen time to see our hero struggle with the moral dilemmas. Even Max waits until the last 10 minutes of the movie to say, “I have a plan,” when the whole plot puzzle has been delivered to him.

Still, it was better than “District 9,” and it was cool, and now people will believe me when I say Matt Damon is the new Bruce Willis. I am a sucker for sci-fi, so I give this movie 3 stars out of 5. In today’s world of haves and have nots, you don’t have to get to Elysium, but it beats staying in Detroit.