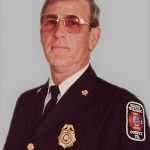 Chief Jacobs during his tenure

Mere words cannot describe Chief Selby Jacobs and the years of outstanding dedication and exemplary service he provided to the Prince William County Department of Fire and Rescue and citizens of Prince William County. Chief Jacobs brought exceptional knowledge, expertise and skills that aided in the creation and foundation of the county’s fire and rescue service.

Chief Jacobs began his career with the Prince William County Fire Service in 1966 as the first Fire Marshal. His primary responsibility was the development of a Fire Building Code. However, his duties consisted of a wide range of tasks to include educational programs and instruction for the annual county fire school. At that time, he was the only state certified instructor in the county.

In 1967, as Fire Marshal, Jacobs was assigned the responsibility of managing the Public Safety Communications Service. That same year, he led the effort to create a 9-1-1 system. Our 9-1-1 system was the first 9-1-1 system on the East Coast and among the first three in the U.S. Due to the physical requirements firefighters have to possess to perform in hostile operating conditions, Chief Jacobs created a physical agility testing program for firefighters. It was the first in the National Capital Region and among the first in the nation. This program compelled him to initiate our physical fitness program.

In 1969, Chief Jacobs was designated as the Fire Administrator responsible for managing three branches of the fire service (Fire Marshal’s Office, Fire Suppression and Communications). As the county’s population grew, expansion of the fire service was essential, spurring a greater need of fire protection. He recognized the need for training and established a training division for three program areas within the fire service –  firefighters, volunteers and fire code enforcement. During this same time, Chief Jacobs created the “Operations Exit Drill in the Home” known as EDITH, that spread nationwide. Today, 50 years later, the program is still being used as a fire prevention method in saving lives. Prince William County was one of eight departments that year to receive Special Recognition for Fire Prevention by NFPA.

Great strides within the county’s fire service were made possible due to Chief Jacobs’s foresight. In 1972, he became Director of the Fire Service and was appointed as Coordinator of Emergency Services, a new program. This distinguished program was put to the test that same year, when the county was severely impacted with major flooding caused by Hurricane Agnes. Today, the Emergency Services program, created by Chief Jacobs remains on the cutting edge of excellence.

Under Chief Jacobs’s direction, the Department became a trailblazer within the fire service. During that same year, Chief Jacobs and the Department adopted one of the first sprinkler ordinances in the nation providing fire protection for the community. Although the Virginia General Assembly passed the Virginia Uniform Statewide Building Code that prohibited localities from exceeding the statewide code, the Department became a leading voice in influencing building code changes used throughout the nation.

The following year, Chief Jacobs hired the first Emergency Medical Technicians (EMTs). The service was renamed as Prince William County Fire & Rescue Service. He partnered with the U.S. Park Police to provide medevac service. This service allows for the transport of critically injured patients to a trauma center and into surgery within the “Golden Hour.”

More Firsts for our Region

Another first for our region was the installation of a communications system allowing persons with speech and/or hearing impairments to communicate with the 9-1-1 telecommunicators.

In 1977, Chief Jacobs advanced our EMS system with the upgrade of rescue teams to advanced life support units to complement a new fleet of medic units he secured through a federal grant.

Around 1980, the Department made use of new technology with “mini computers.” An article by a national fire journal shared our innovative use of the new technology declaring the Department as the future of the fire service. Since that time, we remained progressive with biomedical equipment, Geographic Information System, Computer Aided Dispatch System and public safety radio systems, to name a few. In addition, we created the Child Passenger Safety Seat Program, possibly the first for this prevention and education program among the fire and rescue departments. The need for this program grew out of the concern to protect our most vulnerable in society, our babies and small children, who are injured or worse during vehicle crashes.

In 1985, Chief Jacobs. the Police Department and the Community Services Board created the first joint public safety critical incident management program in the U.S.

In 1988, Chief Jacobs found a cost-effective approach for HazMat service with creation of a non-uniformed HazMat coordinator and a uniformed HazMat coordinator. That same year, due to Chief Jacobs’s contribution to County Executive Noe’s white paper, the Board of County Supervisors appointed a Blue Ribbon Commission on Fire and Rescue. This resulted in the organization of the Fire and Rescue Association, the first 24-hour medic units and the reorganization of the fire service into the Department of Fire and Rescue with the director’s title changed to chief. Chief Jacobs was keenly aware that many of the volunteer departments across the nation were evolving into paid departments. He made use of his role, as the chairman of the Fire and Rescue Association, to not make the same errors as other jurisdictions made in the loss of their volunteer firefighters and EMTs. Today, our volunteer component of our fire and rescue system continues as a strong partner in the delivery of emergency service.

On October 25, 1994, after 28 years of service, Chief Jacobs retired from Prince William County. Retired in name only, he remained active in the fire service. In 2009, he became interim chief of the Fauquier County Department of Fire and Emergency Services until a full-time chief was appointed. He was also an active member of the Virginia Fire Chief’s Association.

In December 2008, a newly erected fire and rescue station (Antioch Station 24) was dedicated in his honor as appreciation for his years of unwavering commitment, dedication, and service.

Chief Jacobs was the “Father” of the Prince William County Department of Fire and Rescue, creating a culture of innovation and exceptional service. He took us from infancy and made us a mature, progressive, productive and respected department. He took pride in the department becoming a trailblazer of the fire and rescue industry concerning fire prevention. His organization and leadership role has enabled the department to be viewed as one of the best fire and rescue systems in the nation.

The role of a founding leader is crucial to the culture of any organization. Chief Jacobs constantly looked for best practices from industry, from science, and other sectors beyond the fire service that we could apply here in the department. This is imminent within our system today; we’re a reflection of Chief Jacobs’s values for public service. The Department’s mission, vision and values statements are essentially Selby Jacobs. These words speak to such things as innovation, exceptional customer service, ultimate performance, unity, and protection of life, property and the environment. We are efficient and high performing in the service we provide to the public because this culture was instilled in the department and its members by Chief Jacobs.

Chief Jacobs recognized diversity as the essential ingredient to having a world class organization. He led diversity efforts at the national and local level. Selby Jacobs wanted his department to be a department of critical thinkers encouraging us to attain a formal education; to seek an education not only from the college and university system but from public safety institutions as the National Fire Academy and the National Emergency Management Institute. Today, the System continues to build upon a strong and reputable foundation due to the initiatives of Chief Selby Jacobs.