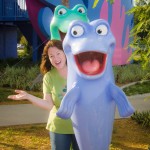 This month, Prince William Living celebrates it’s second anniversary. As proud as we are, it came with a little inspiration, and a LOT of perspiration. In an article sent off to inReads.com, I talked about the hard work, the challenges and the lessons learned on our journey so far.

If you know me personally, you know I almost never leave the borders of PWC. Except to go to one place: Walt Disney World. If Disney’s America had been build here, I would never leave. And the magazine probably wouldn’t exist. For Christmas break, we visited family and spent a little time at the OTHER place I like to call home. You may have gotten a hint, by the week long inspirational quotes from Walt. I want to share with you why Walt Disney has influenced me, and maybe you will share with us, who or what has influenced you.

Why do you visit Disney World so much?

A lot of people ask me that. For me Walt Disney himself is a mentor for my life. He was an entrepreneur, inventor, and family man. He was creative, innovative and brilliant. He learned from his failures and did not let them stop him, only inspire him to try again.
When I was a child I would watch the Wonderful World of Disney. I knew Walt was already gone, but somehow he lived on through his work, through the joy he brought to others, through the company he created that would carry on his legacy. From him I learned imagination, creativity, steadfastness and self reliance.
When I visit WDW I can not only suspend disbelief for a time, but I always come back with a renewed sense of inspiration. I hope to channel that inspiration through Prince William Living in 2013. Here is to creativity, innovation, failure and renewal. May 2013 be your best year ever.

Publisher and lifelong PWC resident Rebecca Barnes, when not busy producing Prince William Living, acts as Public Information Officer for OWL VFD. She and her family live in Manassas. You can reach her at [email protected]