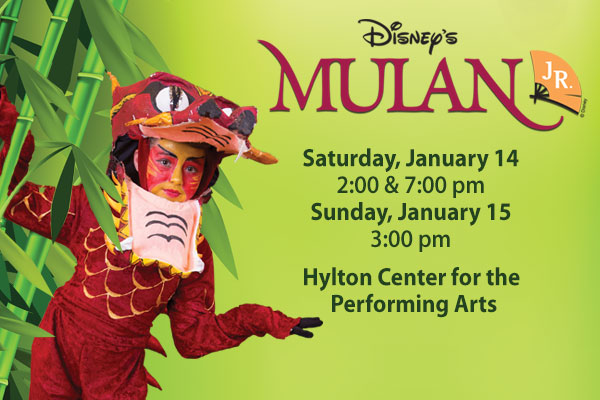 Provided by Center for the Arts

A celebration of culture, music and storytelling, Disney’s Mulan, Jr. is a heartwarming family adventure not to be missed! Travel to the mountains of ancient China as the Center for the Arts’ Pied Piper Theatre brings this enchanting legend to life. Dressed in her father’s armor, the young Mulan takes her father’s place in the Emperor’s army to fight the invading Huns. With the help of a misfit dragon and a merry band of fellow recruits, Mulan tries not to be discovered at the all-male “boot camp”. Fighting for her family’s honor, Mulan faces avalanches and war in an effort to save the Emperor and the Kingdom.

Join us for this amazing show directed by Jann Crawford, based on the 1998 Disney film Mulan and story Fa Mulan by Robert D. San Souci.