Started in 1999 by George Mason University and Fairfax County as a two-day event, Fall for the Book has grown into an annual eight -day festival that encourages a love of literature and lifelong learning through activities such as book discussions and signings, performances and workshops. While Mason’s Fairfax campus serves as a basecamp, other venues throughout the Washington, D.C. metropolitan region host activities as well.

In Prince William, Fall for the Book makes its home at the Hylton Performing Arts Center on Mason’s Manassas campus. Here, the festival took a gastronomic turn on Sept. 18 with a theme of “Haute Cuisine,” proving that behind every good meal is a great story. The center bustled with more than 25 chefs, food writers and authors along with about 300 spectators eagerly making their way through the events, speakers, exhibits and, of course, food.

Nokesville-based pastry chef and food blogger Jason Shriner, aka The Aubergine Chef, kicked things off with a food writing workshop, 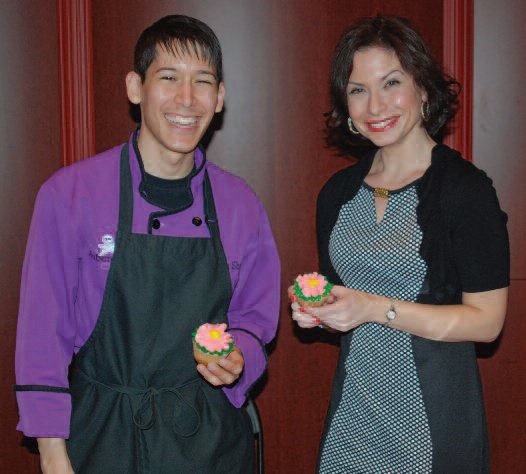 using a variety of creative approaches to help would be food writers (and fans of the genre) improve their craft, such as a game of “Food Scattergories.” Shriner rolled a six-sided die with different letters on it. He then challenged participants to come up with words describing food starting with that letter. The letter “S” elicited “savory,” “succulent,” smoky” and “sensuous.”

“The workshop ended up being very popular with the 70 people in attendance,” said Shriner. “It was really well-received and several of the attendees told me they felt like they were given the tools to appreciate food on a different level.”

Audience participation was also in play during novelist and Duke University professor of French literature Laura Florand’s session at Merchant Hall. She discussed her Amour et Chocolat series, including the first novel in the series, The Chocolate Thief. Her books combine her life-long passion for Paris and chocolate.

Florand began her reading by quizzing her audience about French cuisine. Standing on stage with one hand on her hip and her head at a rakish angle, she called out, “What is the highest rating given by the Michelin Guide to fine restaurants worldwide?” Members of the audience called out their answers, and she tossed a chocolate in the general direction of a man who had the answer right. (He promptly gave it away, like the good guys at a ballgame who catch a stray ball and give it to a kid.) Laughing, Florand next asked, “Which city has the most three star rated restaurants, Tokyo, New York, Paris or Abu Dhabi?” (See the end of this article for the answers.)

After that tasty introduction, the food booths opened and diverse chefs and food celebrities fed the hungry masses. Amy Riolo, author, chef, cuisine and culture expert, television personality and educator who uses global cuisine to share culture, history and nutrition, presided over an assortment of pastries. A crowd gathered around to sample her wares and talk to this sophisticated and talented lady. “[I am] excited to be here,” said Riolo. “It’s great to see people paying attention to food and literature. Not many events do that, and this one integrates the two well. I hope to be invited back.”

Joe Yonan, Food and Travel editor of The Washington Post and the author of Eat Your Vegetables: Bold Recipes for the Single Cook,
prepared samples for an appreciative group while he discussed his writings, including those on his website (joeyonan.com). Meanwhile, across the way Robert Kingsbury, owner of Kingsbury Chocolates and Confections, talked about his craft
and offered samples of gourmet chocolate that can’t be found at the corner drugstore.

At another booth, food power couple Chef Dave Lefeve of the Cock and Bowl in Occoquan and his wife, novelist and forensics
expert, Claudia, cooked up some recipes from her novel Destined for Trouble (Jules Cannon Mystery #1). Down the way, children’s
fantasy writer and jeweler Belinda Miller offered up samples of Ivy’s Tater Dumplings (gnocchi) prepared from a recipe in Winterfrost, the first volume in her Phillip’s Quest book series

A long line of people waited to sample the tacos Michael Pires prepared as a preview of his recently opened restaurant, Zandra’s
Taqueria in Manassas. Further on, in the Lovey Hammel Lounge, a representative of Heritage Brewing Company offered samples of organic and locally sourced craft beers from the recently-opened Manassas microbrewery.

For all the cuisine displayed and consumed, the evening wasn’t totally about food. Recently named Prince William County Poets Laureate Robert Scott and Alexandra “Zan” Hailey read original food poems and discussed their community projects — Zan’s Ekphrasis (written descriptions of visual art) program and Robert’s 10,000 Poems project in which locals who do not think of themselves as poets contribute their work for public display (pwcpoetry.com).

Write by the Rails (WBTR), the local chapter of the Virginia Writing Club, was among the event sponsors. WBTR member Dennis Fargo noted of the event, “The layout of the center was perfect for this evening. I was able to make some new friends, and the Mason students were quite helpful to the visitors.”

Mason event planner Kerry Folan was pleased “to have a lot of local vendors and local writers, with a nice mix of nationally known food experts and novelists.” Smiling broadly, she added, “The event was much larger itself and attracted a larger crowd than last year. … We definitely want to do this again next year, and build on this year’s successes!”

“We are always happy to have Fall for the Book at the Hylton because it feeds both body and mind with this extra special gathering of food, writers and their work,” said Hylton Executive Director Rick Davis.

Manassas resident Dan Verner is the author of the first two books of the Beyond the Blue Horizon: the Story of an American Hero
series, On Wings of the Morning, and On the Wings of Eagles. An active member of Write by the Rails, he can be reached at
dverner@princewilliamliving.com.

The maximum number of stars under the Michelin Guiderating system: ☆☆☆☆☆

The city with the most three-star ratings: No, not Paris.