By Jason Shriner, The Aubergine Chef

Whenever someone finds out I’m a baker around the holiday season they always ask me about my favorite dessert to make for my family. It’s a great question. It’s like asking a doctor they go when seeking medical attention.

Cool, fluffy, and creamy aren’t qualities normally associated with autumn pies. While it may not be traditional my pumpkin mousse pie may become your family’s new favorite dessert the same way it worked its way into the hearts of my family. 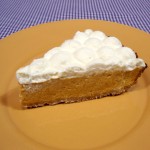 Make this pie the night before to allow everything to firm up to make nice clean slices. You can also deconstruct this dessert into cocktail classes for a different look. Photo Credit: Jason Shriner

What’s great about this recipe is that it’s quick and easy to make. You can buy a pre made crumb crust from the grocery store, but making your own is very easy to do and always tastes better. When you make it yourself it comes out a little more crisp. You can also customize the flavor by using your favorite cookies. I use vanilla wafers but a friend of mine made hers with biscoffs.

The filling is the easiest part. Once you melt the gelatin (used for stabilizing and giving a nice bite to the filling) you simply whisk all the ingredients together. Fold in some homemade whipped cream to make it light and airy.  Fill your crust and chill for a couple hours then top with more whipped cream.

Another reason to love this recipe is that it doubles and triples beautifully while remaining just as easy.  Keep in mind the original recipe makes about 1 ½ pies, so as you double have extra crusts ready just in case. The awkward yield is preferred to being stuck with half a can of sweetened condensed milk or pumpkin puree. You can always pour extra mousse in wine goblets and enjoy a single serving.

Jason Shriner owns the baking & pastry blog The Aubergine Chef, which contains free videos and recipes. He also teaches baking classes at the Manassas Park Community Center. You can visit his blog at www.TheAubergineChef.com.

The recipe makes a little bit more than one pie exactly so have a couple of glasses handy to fill, or make two pies with slightly less filling each.  If you make two pies, double the topping so you have enough to top both pies.

6 ounces vanilla wafer crumbs (about half a box) 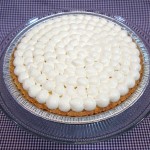 3 months frozen (crust may be soggy when thawed)