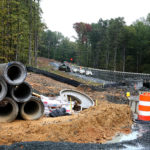 Visit the county’s transportation website for more information on projects and studies.

Virginia Department of Transportation projects include: