There are more than 4,200 religions in the world, according to some estimates, and while we aren’t sure exactly how many different religions are represented in the Prince William region, many of them are making this region full of vibrant diversity. Regardless of your religion, there probably is a church, synagogue, mosque, a forest, or even someone’s house or other place of worship for you.

According to the Association of Religious Data Archives (thearda.com), about 38 percent of the people in Prince William County (not including those living in cities or towns in the county like Manassas City) are religious, meaning they affiliate with a religion. Of those, these are the top 5 in terms of number of people based on the most recent 2010 data:

While several of these are Christian-based, there are also many other religions in the region, including Buddhism, Church of Jesus Christ of Latter-day Saints, Bahá’í, Unitarian Universalism, Pagan, and many others. While there were many places of worship we weren’t able to reach for this article, it highlights
a few of the many religions that nurture our souls and fill our spiritual buckets on this journey called life.

Places of Worship Large and Small

Let’s begin with the denomination that makes up the single largest religious group in the United States. With 22 percent of U.S. residents identifying as Catholic, according to LiveScience, this makes it understandable why in our own region, Catholics topped the list with the most people. If you look up Catholic churches on thecatholicdirectory.com, there are many to choose from in the Prince William region.

Among them is All Saints Catholic Church (located at 9300 Stonewall Road in Manassas), which built a new sanctuary in 2010 to accommodate the growing number of people attending Sunday services. The church has a K–8 grade school on its campus that was built in 1999. You can check out the church’s
services at allsaintsvachurch.org or consult the online Catholic directory for many others in the region. 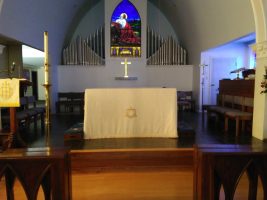 Another place of worship that many in the Manassas area visit is Trinity Episcopal Church (located at 9325 West Street in Manassas). The Rev. Vinnie Lainson, Rector Emerita at Trinity, said, “Episcopalians are people of the book, actually two books: the Bible—we believe all that ‘love your neighbor, feed the hungry, soothe the suffering’ stuff—and the Book of Common Prayer. Basically our services every Sunday, weddings and funerals, and all life in between is how we gather as a community. We are all on a journey, and Trinity is our strength for that wild ride!” You can check out Trinity’s services and get more information at trinityepiscopalchurch.org. 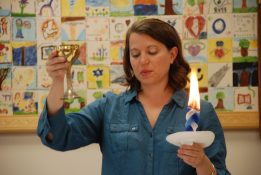 Congregation Ner Shalom is based in Woodbridge and led by Rabbi Lizz Goldstein.

For those looking to practice the Jewish faith, another place of worship in the region is the Congregation Ner Shalom. According to Rabbi Lizz Goldstein, the Woodbridge-based synagogue has about 70-member units, including single and family memberships.

“I became a member of Ner Shalom because I was accepted for who I am,” said Harry Kantrovich from Woodbridge. “Ner Shalom believes in making the environment comfortable for everyone. We are an open and caring congregation.”

Sophia Vitter, also from Woodbridge, said, “I come to Ner Shalom because I love the community and the people, and I continue to learn about all the aspects of Judaism.” More information can be found at nershalomva.org. 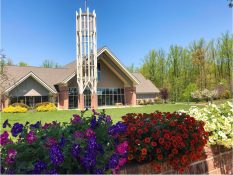 With nearly 750 congregants belonging to it, the Masroor Mosque on Hoadly Road in Manassas offers a peaceful place of worship for those practicing the Islamic faith. “Masroor Mosque belongs to the Ahmadiyya Muslim Community (AMC) within Islam,” said Ayesha Noor, director, interfaith relations, Ahmadiyya Muslim Women’s Association. “Mirza Ghulam Ahmad founded the AMC in 1889 as a revival movement within Islam, emphasizing its essential teachings of peace, love, justice, and sanctity of life.” The doors of the Masroor Mosque are open to all people, regardless of faith, color or ethnic origin.

“Our Mosque is a place which not only facilitates worship of God but also promotes unity, love, brotherhood and sisterhood amongst all of us,” said Bushra Chaudhry, president of Ahmadiyya Muslim Women’s Association, and a Dumfries resident. “The mosque offers equal space to its women congregants. Apart from daily prayers, we regularly organize women’s educational retreats, sports rallies, recreational activities and interfaith events.”

Mehwish Pall from Woodbridge said, “My Mosque is not only a place of worship but another home for me. Just like my own home, I can go to my Mosque on any day, at any time and feel at ease. The Mosque not only strengthens my relationship with God, but also provides an opportunity to build relationships of love and trust and bond in sisterhood. I am proud to be a part of this community and grateful that I can call Masroor Mosque my home.” While the website at masroormosque.com is under construction, you can learn more at alislam.org, a community website.

Paganism is usually thought of as a nature or Earth-based worship religion. While some may practice their faith in their homes, community centers, or at other churches, services can also be held outside to celebrate nature and various rituals, and events are held throughout the year as well.

“One of the most important things for those following any of the Pagan paths is that it is a path of self-discovery and self-growth,”said David Ewing, a U.S. Navy veteran from Manassas Park, who has been Pagan for 26 years. “Given that we do not have a central scripture or dogma, we learn, grow and build
our spiritual path with a foundation on the pre-Christian beliefs while adapting those beliefs to match our modern lives. The Pagan paths enable and empower those on these paths to learn more about the world’s religions, recognizing what those religions have in common and embracing the common ideals
within the framework of ancestral and Earth-based beliefs.” You can learn more about local Pagan activities and worship at potomac-circle.org. 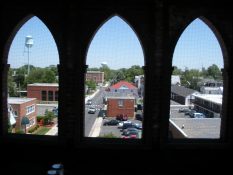 Bull Run Unitarian Universalist (BRUU) church in Historic Manassas is known for its historic, beautiful architecture, but with more than 250 members, they are also active in the local community with a food pantry that serves the hungry and needy in the area, their strong social justice efforts, and many other activities that serve their goal of being a safe community for seeking and service.

Art Muirhead from Clifton, who serves as president of the board of directors at BRUU, said, “BRUU appeals so much to me because it provides the kind of warm, caring community that all of us need in an age where individuals are increasingly technology-oriented and physically isolated. We come together for many purposes: worship, music, fellowship, fun, education and desire to make a progressive and positive difference for our local community, our country and the world all people share together.” For information about BRUU, visit bruu.org.

All Faiths Working Together

A common saying is that there are two things you don’t talk about–politics and religion. But religion is an important part of many people’s lives that needs to be appreciated and respected. Most importantly, it is essential that even if we all believe in different faiths, we live in harmony and work together toward a
better world.

The organization’s mission according to its website at unityitc.org is “to cultivate an appreciation of all the cultural heritages in Prince William County, Manassas, and Manassas Park, Virginia. We work to accomplish this by 1) promoting cross-cultural understanding, 2) educating the public in anti-bias skills,
cultural diversity and basic human rights and by 3) explaining the laws and consequences of hate crimes and other behaviors that incite violence and fear. We work proactively to engage all residents in helping to meet these goals to prevent crimes and other destructive behavior.”

The organization’s founding is an interesting story of different people and faiths coming together to work on a common goal. According to the website, “In the fall of 1995, Illana Naylor and the Manassas Church of the Brethren addressed letters to local congregations inviting them to share the richness of our
diversity and to begin planning an event that would draw public attention to the problems of intolerance facing our communities. In the following months, Naylor and Debbie Rubenstein co-chaired the effort to bring a major community event to fruition. Many places of worship, community organizations and citizens from Manassas, Manassas Park and Prince William County participated. A key component of this first event was the showing of the documentary film Not In Our Town, and the development of a plan of action by discussion groups following the film. This plan continues to be a driving force for our work.”

Again, there is no way one article can list all the wonderful faiths and religions that exist in the region, but we hope this gives you a peek into the diversity we are proud of in a community that comes together to work towards common goals of peace and friendship, while embracing the grace of your religion and working for a better world.

So, whether you are new to the region and looking for a place of worship, or someone who has lived here your whole life and just starting your spiritual journey, there is a place for you.