Firebirds Wood Fired Grill, located in the recently expanded Stonebridge at Potomac Town Center shopping center, opened its doors last November, making it one of the newest additions for the chain, based in Charlotte, North Carolina. The company chose Woodbridge, according to General Manager Joe Ortega, to “oﬀer a dynamic dining experience like no one else in the Prince William area.”

Firebirds focuses on “an innovative style of American cuisine, using a blend of bold seasonings, spices and sauces that makes each dish ﬂavorful from beginning to end,” Ortega said. But what really sets Firebirds apart is the wood-burning grill which gives many of the foods a tremendous, smoky ﬂavor, he added. 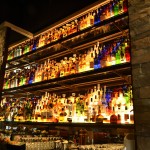 The Firebar
Photo by Tamar Wilsher-Rivas

Another distinct feature of the restaurant is its “ﬁrebar,” an impressive ﬁreside bar. When ﬁrst entering the restaurant, customers are greeted by two stunning visuals: the waterfall display above the ﬁrebar and the bar itself, which features a $30,000 rainbow of backlit liquor bottles. “It just may be the eighth wonder of the world,” Ortega said. The ﬁrebar also includes a massive stone wall with a ﬁreplace. “The owner of Firebirds fell in love with log cabins on a trip to Colorado and decided to put ﬁreplaces in all of his restaurants,” explained Ellie Baro, bar manager.

On the opposite wall is a wine display featuring hundreds of domestic and international bottles. “I wish I had one of these at my house,” commented patron Jermaine Hinds of Woodbridge.

Additionally, the restaurant oﬀers a wide variety of delectable starters, salads, entrees, sides, burgers, sandwiches and desserts. An all-inclusive meal, for example, might begin with the lobster spinach queso appetizer and a grilled shrimp and strawberry salad, followed by a ﬁlet mignon wrapped in applewood-smoked bacon, a loaded baked potato, and ﬁnishing with a slice of Crème Brulee Cheesecake.

The meals are ﬁlling, as Woodbridge resident Andrea Patterson attested as she left the restaurant. “I’m still full. The burgers were so good and the sweet potato fries were the bomb. I’ll be sure to tell my friends,” she said.

The chefs are well-trained and experienced. Executive Chef Erick Kronquist works hand in hand with his two sous chefs, Jay Reinhardt and Miah Wood. Combined, the three have more than 48 years of experience in running proven kitchens.

He described Firebirds as “a polished casual dining restaurant,” adding that the eatery is “the type of place where guests can grab a 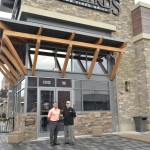 great burger or salad before catching a movie, or they can enjoy an incredible steak or grilled lobster tail along with a bottle of wine and make an evening of it.”

The customer response to the new location has been positive, according to Baro. “The thing I’ve heard most is that Woodbridge needed a place like this, so people could go out to a nice restaurant and enjoy themselves,” she said. “We have a lot of people who would go all the way to [the Firebirds in]Fredericksburg. They’re excited to have a location closer to home.” She added, “The bar  has been very busy almost every night; people love to drink here.”

The bar area includes three large ﬂat-screen TVs, making it a great place to watch the game or chat with friends, Baro said. The most popular drinks are the cilantro cucumber gimlet and Firebirds’ spinoﬀ of the cosmopolitan, Sex and the Queen City, named in honor of its origin in Charlotte. The bar has six beers on tap, including the locally produced Optimal Wit from Port City Brewing Company in Alexandria.

Firebirds employs about 100 people in its Woodbridge location. “Our wait staﬀ and management are professionals who share a ‘hospitality mentality’ where we have fun taking service seriously,” said Ortega, who added that he gained 10 years of management experience at Outback Steakhouse and Boneﬁsh Grill before joining Firebirds in June 2012. He said the move “was a perfect ﬁt for my personality and desire to grow.”

Baro has been working for Firebirds for three years; she transferred from North Carolina to open the Woodbridge location, she said. Waitress Rachael Hannoosh, of Woodbridge, said she also enjoys her job at Firebirds. “We all work well together, we’re all helpful, and we all enjoy each other. The management is open and helpful; I can go to them with anything,” she explained.

In addition, the restaurant has an an indoor cocktail seating area and an outdoor patio, which adjoins Stonebridge’s central drive – making it ideal for people-watching during the warmer months.

The dining area makes up the bulk of the restaurant and faces the open kitchen and grill. It is decorated with vases, cornucopia-like baskets, and paintings of impressionistic landscapes, still-life and animals. Booths and tables are both available. Diners can relax to the sounds of a commercial-free and eclectic mix of classic and modern rock, country, smooth jazz and reggae. Firebirds can accommodate up to 256 customers.

Ortega has high hopes for the new location. “I see us continuing to grow and capture a large portion of the Northern Virginia market,” he said.

Paul Keily recently graduated from the University of Mary Washington with a Bachelor of Arts degree in English that includes a concentration in creative writing. He lives in Fredericksburg and can be reached at pkeily@princewilliamliving.com.