Four area women were awarded the first annual Jennie Dean Legacy awards during a Black History Month event at the Manassas City Council meeting on Jan. 29. The award winners helped unveil a scale model of a Jennie Dean statue that is the centerpiece of a Manassas Industrial School/Jennie Dean Memorial Update.

The four winners were chosen for extraordinary volunteer efforts that embody the community commitment of Jennie Dean, founder of the Manassas Industrial School for Colored Youth (MIS), which educated regional African American youth from 1893 until 1938. 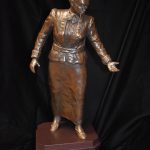 The statue unveiling marked the kickoff of the MIS/Jennie Dean Memorial Update fundraising campaign to honor Jennie Dean. Despite being born a slave, she raised funds tirelessly to establish the MIS. This school educated more than 6,000 students at a time when education was out of reach for most African Americans.

The proposed Jennie Dean statue will be the focal point of the Memorial at 9601 Prince William Street. The memorial opened in 1995 and includes replicated school building foundations, an information kiosk, and a model of the original campus. The update includes a surrounding plaza with enhanced landscaping designed to encourage the community to visit, linger, and learn about Jennie Dean’s rich legacy.

Bristow artist Christopher Hill previously created a bust portrait of Marion Barry and a seven-foot-tall Harriet Tubman statue at Salisbury University on Maryland’s Eastern Shore. Hill faced a particular challenge in creating the Jennie Dean statue. Only one photo of Jennie Dean exists, and that photo is a head and shoulders image.

He immersed himself in period research and the Jennie Dean story, and worked with the Update Committee to create a more compelling work. It is his hope that the statue will be an interactive element of the Memorial. “Jennie Dean was, above all, an altruist determined to elevate the welfare of her people through education, faith and tradesmanship. In order to convey this, I have designed Jennie Dean with an outstretched hand reaching towards viewers, as if inviting to lift them up,” Hill says. “Over time, I hope that people will take her hand and wear away its patina. When this hand begins to polish and shine, it will reflect the engagement Jennie Dean continues to inspire in the community.”

Future plans call for connected walking paths, an updated interpretive kiosk and signage, and an amphitheater for community use. Visit manassascity.org/jenniedean?fbclid=IwAR2CgMFxQXILMf8IFhbBbX-Ql3T4OkmEfJSAB0k2nc8fbRKiO_7O7NtSl1s  for details on the Memorial Update.