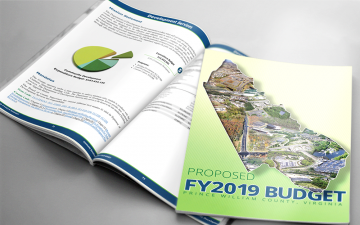 Prince William County Executive Chris Martino presented the Proposed FY2019 Budget to the Board of County Supervisors on Tuesday, Feb. 22. The proposed $1.6 billion all funds budget addresses the board’s strategic goals of maintaining a robust economy, keeping a safe and secure community, enhancing mobility throughout the county, assuring the wellbeing of the most vulnerable populations, and providing quality education and workforce development opportunities.

Education remains the board’s top spending priority. In accordance with the revenue sharing agreement, 57.23 percent of the general revenues are provided to the Prince William County Public School System to maintain quality education in the county.

The fiscal 2019 proposed allocation to the school system would be roughly $579 million, a $31 million increase over fiscal 2018.

The proposed budget includes an additional $800,000 to help develop a robust economy. Some of that money would be used to develop small business programs and hire consultants to focus and direct economic growth in the county. Resources would also be directed at developing business in the eastern end of the county, including establishing a cybersecurity partnership with the Northern Virginia Community College.

Also included in the proposed budget was $1.6 million for the Transportation Roadway Improvement Program, or TRIP.  The money to fund the program comes from recordation tax revenue designated for transportation. Each magisterial district would receive $225,000 in TRIP funding to pay for small transportation projects.

The proposed budget also showed that $6.2 million would go toward locally subsidizing the Virginia Railway Express. The Potomac Rappahannock Transportation Commission would receive $11.3 million from the fuels tax.

According to a recent study commissioned by the board, retention of public safety personnel needs to be addressed. “The county is losing firefighters and police officers to other jurisdictions at an alarming rate,” Martino cautioned. The proposed budget recommends $3.1 million to address public safety pay compression and implement pay scales based on years of service.

Operational costs to fund board initiatives are included in the fiscal 2019 proposed budget. Adding staffing for the expansion of the Adult Detention Center will cost $3.4 million and added police staffing in this fiscal year will cost $1.9 million.

Wellbeing in the county includes programs to address substance abuse and mental health in the county. Money to address substance abuse waitlist, residential drug placement screening and medication assisted treatment is included in the proposed budget. A crisis assessment center would provide mental illness evaluation as an alternative to jail, which would free law enforcement officials to return to patrol.

Also included in the proposed budget is a 3 percent pay for performance increase for county employees at a cost of $8.5 million.

Following is the proposed budget calendar for sessions scheduled to be held in the Board Chamber at the McCoart Government Center at 1 County Complex Court in Woodbridge:

If people are unable to attend meetings in person, there will be an opportunity to ask questions online through the budget Q&A application at www.pwcgov.org/budget; or they can provide feedback on the budget items on the board’s agendas through SpeakUp! Prince William at www.pwcgov.org/speakup.