During the ribbon cutting program, Scouts from Troops 1390 and 1396 demonstrate the proper folding of one of the more than 70 American flags received the day of the ceremony.

Prince William, VA, June 16, 2014 – The American Flag Collection Center at the Prince William County Landfill is now open. This service will be available to citizens and businesses.

The American Flag Collection Center is a joint effort between the Boy Scouts of America Occoquan and Bull Run Districts, Keep Prince William Beautiful and Prince William County Solid Waste Division. The opening of the center was commemorated with a ribbon cutting on Flag Day. Supervisor John Jenkins and Supervisor Marty Nohe along with the Boy Scout Occoquan District Executive Ben Hazekamp and Solid Waste Division Chief Tom Smith gave remarks and congratulated Dave Byrne and the partners on this new collection program. The collection center was the dream of Scout leader David Byrne and he was instrumental in the planning.

Supervisor Nohe shared that as a young scout,his favorite project was his Flag Day presentation. He recited this speech from memory during the ceremony and noted that it was this presentation that inspired him to be a public speaker. Supervisor Nohe also challenged Scouts to go out into the
community and educate citizens on proper care, presentation and retirement of the American Flag as an Eagle Scout project.

Supervisor Jenkins shared stories of his three sons, who all achieved the rank of Eagle Scout. He also shared how remarkable this program is and the meaning it has to veterans such as himself.

Tom Smith noted that this collection program was something he’d wanted for the landfill for a number of years and he presented numerous flags a retired Solid Waste employee had been saving for the occasion. He also cited the project as a true community effort because the metal collection bin was donated by Prince William County Library and refurbished by Prince William County Fleet Management.

Commander Randy Coker from VFW Post 1503 was also present to show their support for it.

Program founder David Byrne in his closing remarks stated, “I want to encourage you to be active in preserving the respect that our Stars and Stripes deserves. Look around as you drive through your neighborhood, to church or to work. You’ll see flags everywhere. It’s an awesome sight. Every once in a while, you’ll see a flag that could use some help. Take a few minutes out of your day to let someone know that their flag could use replacement. It’s not an opportunity to shame them but to engage them in conversation. Maybe they didn’t know their flag was torn. Maybe they just suffered a loss and just haven’t gotten to it yet. Maybe it’s the flag they were flying when 9/11 occurred. Most of the times it’ll simply be an oversight we make in our busy
lives.” 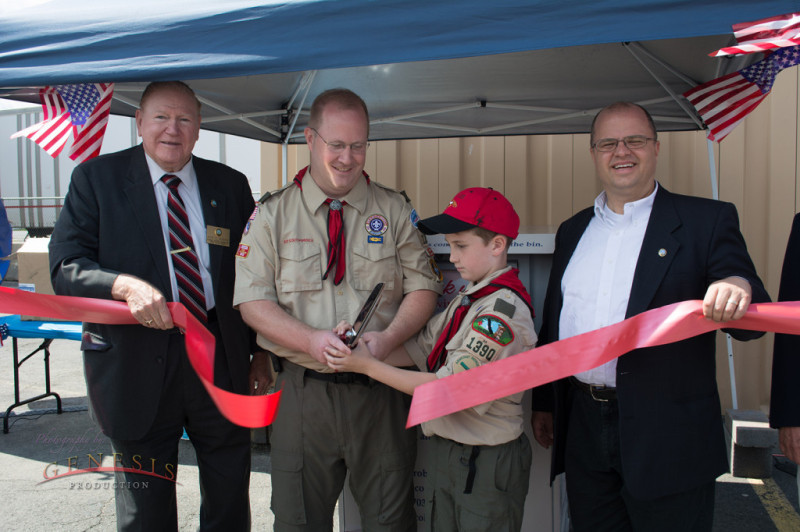 The Collection Center is located at the Prince William County Landfill and is available during normal operating hours. The Collection Center will also be staffed by Boy Scouts every 2nd and 4th Saturday of the month from 9am to 1pm to allow citizens the opportunity to present their flags in person. Scouts will be prepared to demonstrate proper folding techniques and will be happy to personally fold a citizen’s flag for them. Scout staff will also answer general questions about flag etiquette and history. Citizens may also place folded flags in the special collection bin during unstaffed times.

The program will provide a service where citizens and businesses can bring their torn, faded, worn and old American Flags. All flags received at the collection center will be picked up on a regular basis by local Boy Scout troops and will be distributed among the troops and local civic organizations such as the VFW and American Legion to be retired in their regularly scheduled Flag Retirement Ceremonies. All flags will be retired during a solemn, dignified ceremony.

In accordance with the United States Flag Code, all appropriate flags will be burned during the ceremony in a manner consistent with the traditions of the responsible organization. Although most ceremonies are private, arrangements may be made to accommodate citizens interested in participating in a flag retirement ceremony. The Flag Collection Center received almost 100 flags in the first weekend. Most of those flags were ceremoniously retired during a joint retirement ceremony at Quantico National Cemetery on June 18th. Prince William County Sheriff’s deputies, Fire and Rescue personnel and local Boy Scout troops were involved in the retirement ceremony.

Genesis Productions provided photography and videography during the event.

Donations to support the program can be made through Keep Prince William Beautiful (www.kpwb.org) and note that the donation is for the Flag Collection Center. Donations will be used to support awareness and expand the program.