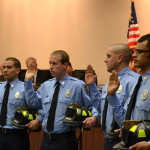 City of Manassas, VA . . . At the Monday, March 11 City Council Meeting, four new Firefighter/Medics weresworn in to services after completing a five-week orientation and training program.

Firefighter/Medic Matthew Heppner is originally from Riverhead, NY and currently resides in Fredericksburg, VA. Heppner has been in the fire service since 2008.

Firefighter/Medic William “Dean” DeJarnette was raised in Culpeper, VA and attended the College of William and Mary majoring in Business Finance. In 2007, he earned his EMT Basic and volunteered at the Williamsburg Fire Department, as well as Reva Volunteer Fire/Rescue. Currently, he volunteers at Culpeper Rescue as a medic.

Firefighter/Medic Jesus Castro was raised in Alexandria, VA. Castro began as a volunteer and shortly thereafter knew he wanted to pursue Fire and Rescue as a career.

Firefighter/Medic Alexander Huys was raised in Addis Ababa, Ethiopia. Huys became a citizen of the United States in 1998. He began as a volunteerwith Sterling Fire and after five years in Fire and Rescue, he can’t imagine doing anything else.

The four new hires have been placed into active service on the fire apparatus and medic units.  During their one-year probationary period, these new Fire & Rescue personnel will undergo further mentoring and evaluation.