A group of U.S. military veterans with a goal to educate future generations about our nation’s historical battles and milestones founded the Freedom Museum, said Jim Porter, president of the museum’s board of directors. The museum, which opened its doors on July 4, 1999, is part of the affiliate program of the Smithsonian Institute and is operated by U.S. military veteran organizations, including the American Legion and the Vietnam Veterans of America, he said.

The Freedom Museum is currently located in an air terminal building at the Manassas Regional Airport, 10400 Terminal Road. Phase Two of the museum’s long-range plan includes building and relocating to a permanent structure adjacent to the airport. 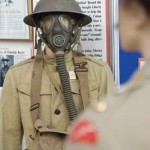 Using mannequins, the Freedom Museum displays the uniforms of various wars. The museum covers the American experience of all significant military events throughout the 20th century.

A Treasure Trove of Military History

The museum is a unique treasure trove of 20th century U.S. military history. On one of its walls hangs a panoramic photograph of the 80th Infantry Division, nicknamed the “Blue Ridge Division,” which included men from Virginia, West Virginia and Pennsylvania. In World War I, the division numbered 23,000 soldiers and sailed to France, landing on  June 8, 1918.

The photo shows a large group of the soldiers while they were stationed in France that year. A roster lists the name of each soldier pictured. Visitors related to anyone listed have the opportunity to see what their ancestor looked like.

The Freedom Museum displays and exhibits a wide array of military artifacts, many donated by loved ones of local fallen heroes. Artifacts include objects from bombsights, medals and ribbons from all branches of service, newspaper clippings, tools, equipment, personal mementos, letters from soldiers and items used by local servicemen.

The museum covers the American experience of all signiﬁcant military events throughout the 20th century, including U.S. victories and losses up to modern day. World Wars I and II, the attack on Pearl Harbor, the Korean War, the Vietnam War, the Persian Gulf War and the tragedy at the Pentagon on Sept. 11, 2001, are represented. There are also exhibits recognizing the role of women in the military and paying tribute to medics and chaplains.

For his troop service project, area Eagle Scout James Corsin created a memorial that includes the names of local fallen heroes who lost their lives in each war. Porter recalls that one woman, visiting the museum with her son, was brought to tears over the memorial. When he asked why she was crying, she explained she hadn’t expected to see her husband’s name at the Freedom Museum, and was moved that it was included in Corsin’s memorial.

An exhibit on the Spanish-American War, which began in 1898, greets visitors entering the museum. This was a time when America, having defeated Spain, was ﬁrst recognized as a world power.

Mounted photographs depict what life was like during wartime for early American soldiers. Mannequins in time-period uniforms and ﬂight suits provide a realistic depiction of what our servicemen wore.

Local hobbyists constructed the numerous model planes and scale-model battleships strategically displayed throughout the museum, Porter said. Noted artist, author and Marine Corps veteran Avery Chenoweth, Sr., whose art can be found in collections around the world, also exhibits some of his poignant paintings, depicting episodes in history that photography   didn’t capture.

Volunteers, many military veterans, are the cornerstone of the Freedom Museum and essential to its existence. Active participants in the museum’s day-to-day operations, they’re always available to answer questions and recall war stories for interested groups, Porter said.

A volunteer for nearly four years, Ernest Merle Hancock, of Manassas, shares with museum visitors how he was captured by the enemy when his B-17 aircraft was shot down over Germany on July 18, 1944. “I shot down three German aircraft before our plane was hit,” said Hancock, a gunner.

“It was a long row to hoe,” he said of his experience as a Prisoner of War (POW). He was a POW for a year in Poland until the British liberated him and the other POWs. A photo of Hancock hangs at the museum as a tribute to volunteers who dedicate their time and share their stories to educate youth about our nation’s past. 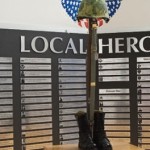 The museum lists the names of local residents killed in combat or from acts of terrorism.

Open daily from 9 a.m. to 4 p.m. with self-guided tours, exhibits and unique programs designed to bring history alive, the museum is also a ﬁeld-trip destination for schools, summer camps and retirement homes. Porter estimated that the museum receives about 5,000 visitors each year.

In addition, the Manassas Airport Regional Business Alliance partners with the museum to hold an air show each May, which attracts about 10,000 people, Porter said. Admission is free to the show, as well as to the museum, although donations are accepted. Funds raised support the Freedom Museum.

Pilots and collectors, including military veterans, exhibit their vintage planes at the show, and the museum displays a jeep from the Vietnam War era and a World War II vintage military warbird’s nose head, equipped with 50-caliber machine guns, which the museum also displays during parades, Porter said.

To schedule a ﬁeld trip or presentation or for more information about the Freedom Museum, call 703-393-0660 or visit www.freedommuseum.org. Donations to the museum can be made online, where tickets for its annual “Hangar Dance” fundraiser, on Oct. 5, are also available for sale.

Lisa Collins-Haynes lives in Woodbridge with her husband and daughter and is a freelance entertainment and travel writer and self- professed out-of-control travel spirit (OCTS). She invites everyone to follow her travel blog at www.octsblogger.wordpress.com. She can be reached  at  lhaynes@princewilliamliving.com.