It was 10:00 a.m. Nearly two dozen representatives from at least seven organizations piled into the corner conference room at Virginia Department of Transportation’s (VDOT) Lake Ridge Area Headquarters. They were there to discuss restoring the creek that runs behind VDOT and the Chinn facilities. It had been impacted by inadequate stormwater management practices related to the 2019 construction of John Jenkins Elementary School. The damage affected wildlife, altered the landscape (including damaging local ponds) and sent sediment and pollutants down the watershed into the Chesapeake Bay. 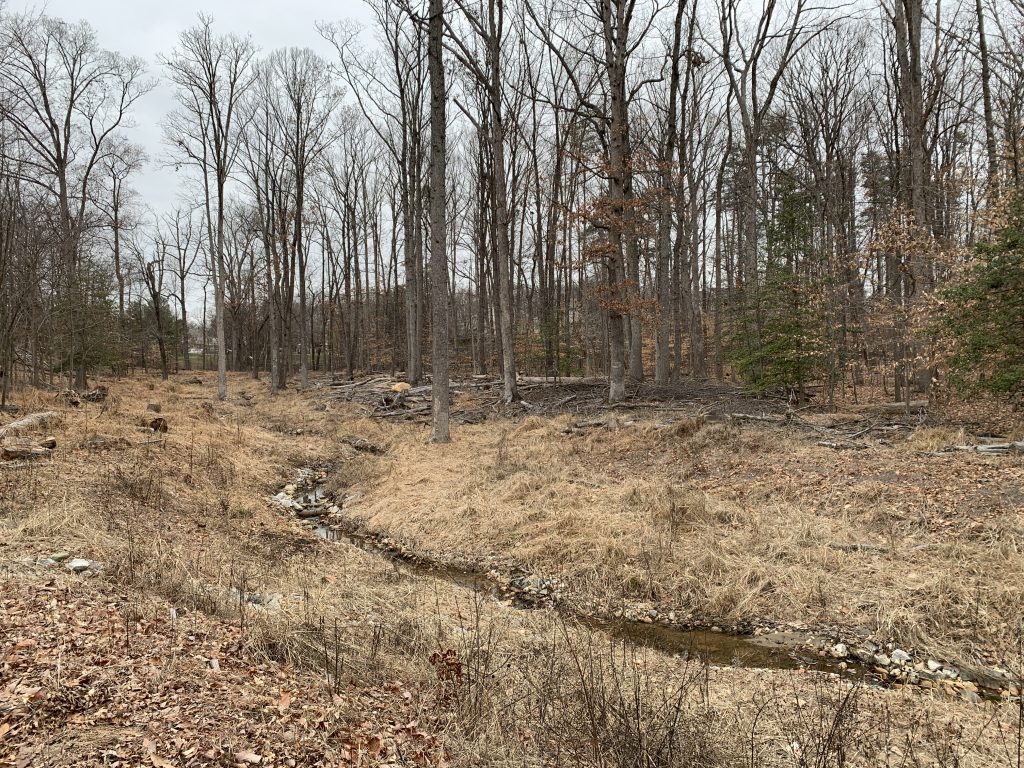 Step pools help slow down the water’s energy down the steep incline and create drought resistant habitats for amphibians.

Together: Restoring the Creek and Habitat

The conference room itself was spacious and filled with maps, equipment and a screen that scrolled messages for staff. The many small tables pushed together to create one large conference table dominated the room and felt like an appropriate parallel. Many organizations were coming together for a common goal: a reminder that together we can accomplish great things.

Marc Aveni, Division Chief for PWC Environmental Services, led the discussion. Aveni said that the project would restore the habitats and the landscape. The project would reestablish adherence to Environmental Protection Agency TMDL (total max daily loads), which sets pollution limits for each jurisdiction in the Chesapeake Watershed.

VDOT TMDL Program Planner Tracey Harmon noted that the project was completed for less than the average cost of an urban/suburban stream restoration project. Those projects typically run from $500-$1000 per linear foot. “The total cost of the project was about $300,000 for about 1,000 linear feet and was completed in about two and half months,” she said.

She said factors contributing to the cost savings included VDOT owning the right-of-way, a creek depth of two to four feet and excellent weather. Additionally, the creek was so badly damaged that the bed was nearly dry. While that helped make the project easier and less expensive, it didn’t allow for an amphibian biodiversity study. These studies help measure the exact impact a restoration has on the habitat. 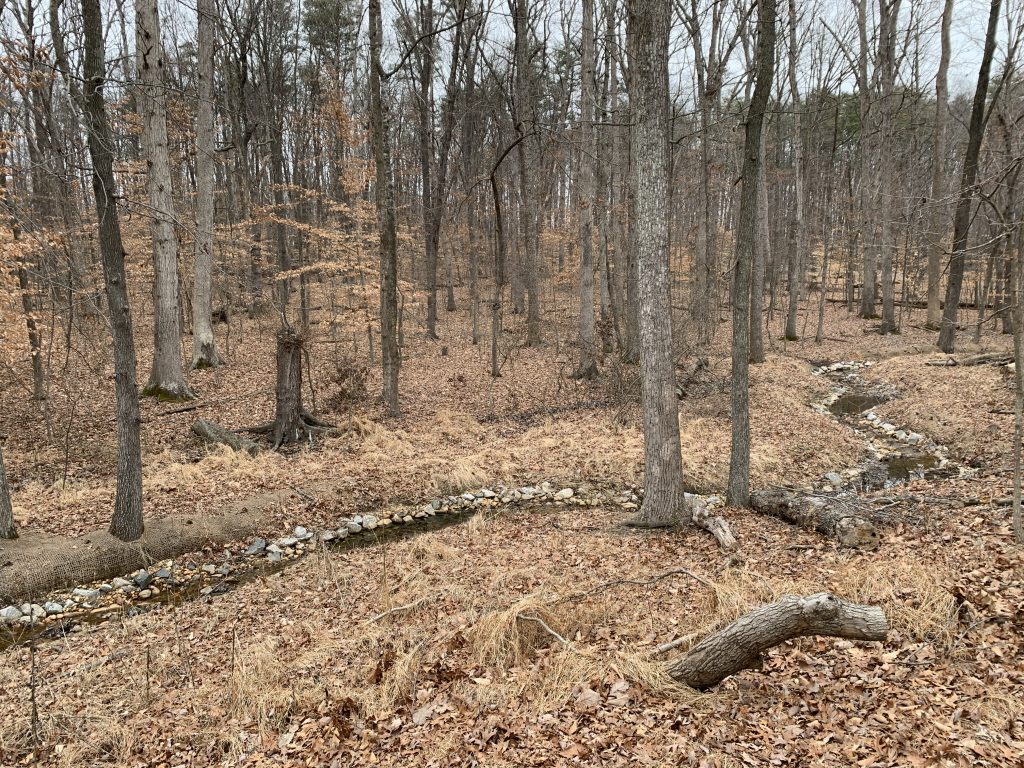 Banks were reinforced with netting until vegetation can take root in the spring. Rocks help reduce erosion.

A Preview of the Creek’s Future

During the half-mile walk to the restoration site, Aveni said that his team is working on a grant to offset the County’s cost for restoration. Over the years, his team has in grant funds for these kinds of projects, and he is optimistic about receiving this as well. Additionally, the County will be using the same contractor as VDOT, RES. Resource Environmental Solutions, LLC, is a company that specializes in designing, constructing, and monitoring ecological restoration projects. Working with a company with a proven success higher up the watershed strengthens the grant application.

As we gathered around the midpoint of the restoration site, an RES representative explained how the process worked. The creek is steeper at the higher part of the watershed, which adds energy to the water. Before the restoration, the creek was encroached by a concrete slab (which made it easier to bring construction vehicles on site) and had an 80-foot pipe running through it. During heavy rains, water, fueled by the steep incline, would shoot out of the pipe like a firehose, damaging the land on the other side. This energy plus a sandy soil led to more erosion and the creek veering off its natural path.

In addition to removing the concrete slab and the pipe, RES installed step pools that were created with trees from the site. These pools are shallow and look like a wide staircase, causing the water to lose some its energy as it comes down the steep incline. They also provide permanent water sources for wildlife, as the pools are resistant to drying out even during a dry spell.

In the flatter, shallower areas, ripple pools are created by strategically arranging soil and stones. These also create permanent water sources and reduce the water’s energy. RES also enhanced the flood plain area around the creek. This allows the creek to overflow safely to the sides of the banks which also supports and increases the wetlands habitat around the creek. 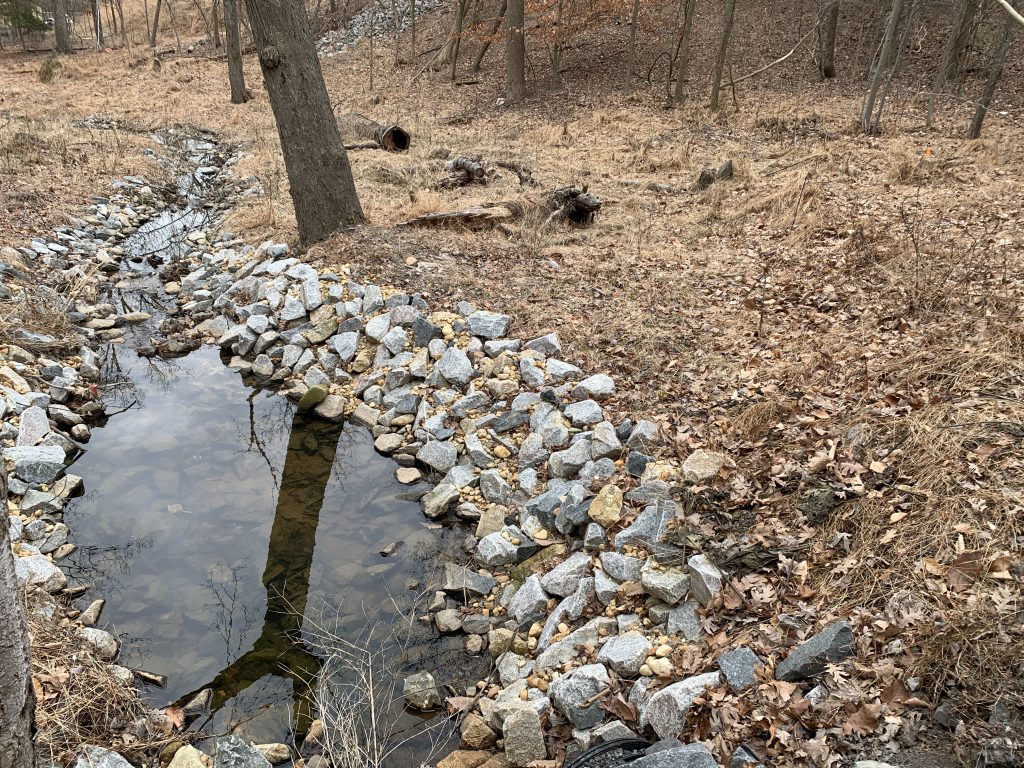 (Off screen) A pipe that could not be removed could push water out at a high speed eroding the banks. Rocks help protect the banks while a wider creek bed allows the water to lose energy to prevent erosion down stream.

A recent Washington Post article about stream restoration in Fairfax points out financial and environmental concerns for these kinds of projects. Costs include all phases, including planning, construction, and maintenance, as well as the County staff time devoted to the project. Environmental concerns include habitat change and the removal of mature trees from the construction site.

Harmon stressed that RES was diligent about maintaining and restoring the area around the creek. Mature trees had to be cut to make space for the 14’ machinery. However, many trees – some just a few feet from the creek itself – were left intact.

RES also is incorporating the natural landscape and environment, providing a low-cost sustainable solution. Instead of concrete barriers that need to be replaced every 50 years, promoting plant growth results in more resilient banks that become stronger over time. Representatives from the organizations at the VDOT tour also pointed out that without proper management, the creek could cause additional damage, threatening the nearby homes and soccer fields. Additionally, costs to localities may be defrayed by the $182 million Stormwater Local Assistance Fund proposed in Governor Northam’s budget.

Walking back up the trail, the RES representative shared his excitement for the creek in the spring. “You should come back for a frog tour with your community,” he said cheerfully to the Old Bridge Estates treasurer. That’s when it struck me that less than a year ago this damaged creek was either full of violently rushing water or bone dry. Now, in just two to three months, it will again be a thriving ecosystem.