USTigers, an elite Tae Kwon Do school in Gainesville, ensures their students learn self-defense and life skills – even during COVID.

Tae Kwon Do is a Korean based martial art that translates to “kicking,” “punching” and “the art or way of.”

Their programs are designed to focus on self-defense, self-improvement and the value of mental and physical fitness.

Regular Tae Kwon Do classes at the gym include Little Tigers Group (four to eight years old), Junior Tiger Group (eight to 15 years old) and Teen & Adult Group (16 and up). All classes are in a group setting.

Many may think the Little Tigers Group has the children starting young, but Kim said 20 years ago, kids were starting Tae Kwon Do by the age of 10. About 15 years ago, kids started coming at a younger age.

“The way I see sports – the earlier you start them, the better,” he said.

For parents who are not sure if Tae Kwon Do is a great fit for their child, trial lessons are available.

Kim said balance and coordination skills are important for Tae Kwon Do because it is a defense to an offense type of setting. This allows the students to defend themselves if needed.

USTigers emphasize and promote coordination by teaching students how to be ambidextrous. He said this is important because in this sport students utilize more than their dominant hand.

“Balance is in a lot of sports too,” Kim said. “When kicking, one foot is in the air and the other is on the floor. Sometimes the more trained can have both feet in the air when kicking. You have to work on that type of balance to be effective in this sport.”

The end goal for many is to be a black belt.

“I’m sixth degree and I have been doing this since I was about four or five when my dad got me involved with this in Korea,” Kim said. “I’m a believer, once you become a third or fourth degree black belt—it’s like getting a Master’s Degree in school. The number of years that you have been practicing, you are probably at the top of your position.”

He said when someone is usually a certain degree black belt it displays the tenure they have been in a sport.

He said that there are blue and green belts that are sometimes better than a black belt.

Adults take the Tae Kwon Do classes as well. USTigers ensures the adults are stretching and doing cardiovascular exercises. He said this is less intensity, but more repetition to promote endurance training for the adults.

At USTigers, they focus on focus on discipline, confidence, sociability and leadership.

“I like to focus on those things because it is a part of life,” he said. “We’re teaching people how to live life properly. I don’t want people to think we are just kicks and punches.”

He said when students leave class, the goal is not to start a fight. Students there are well-mannered, courteous and he wants them to stay that way when they go out in the world. 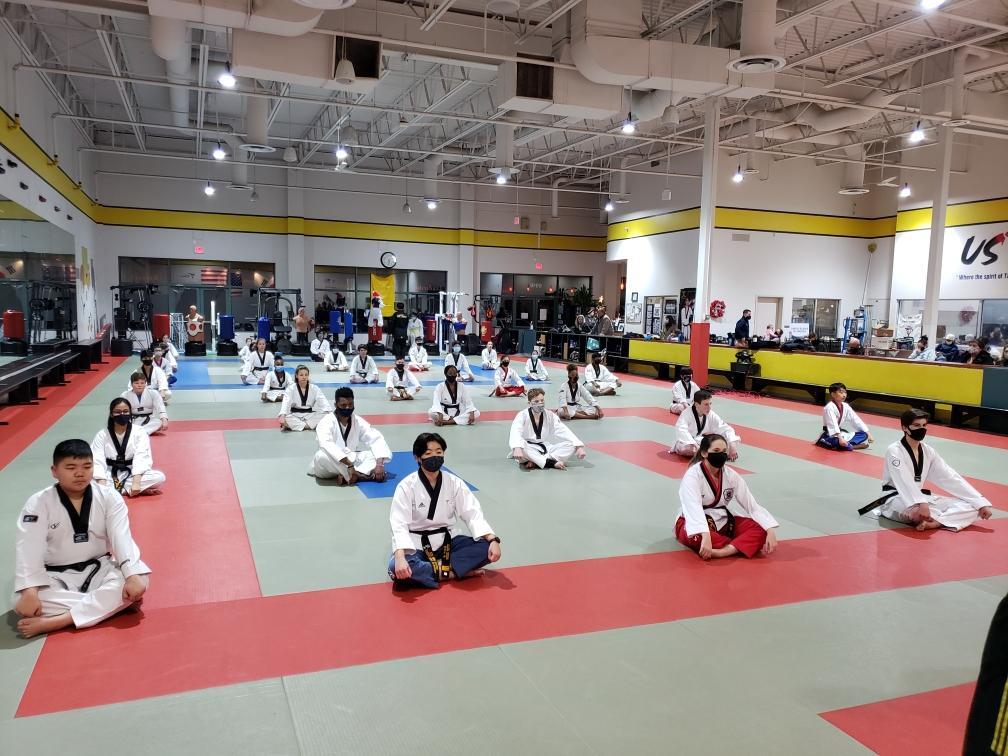 Students listening to the instructor as they social distance at the school. Masks are not mandatory for the students to wear, but the instructors have to wear masks.

USTigers’ classes have been small in recent months. He said before COVID, class size was 30 and now it is 10 students per class.

Masks are not mandatory for the students training, but the instructors must wear a mask while teaching. He said teaching while six feet apart has been difficult. Tae Kwon Do is very hands-on – instructors must reposition students’ arms or move their feet to properly master a skill.

Also, healthcare professionals come in and give tips on how to operate the school. Hand sanitation stations can be found all over the facility.

They have retained kids on a yearly basis – many have stayed for three to six years – but because of COVID, many of the youth have not returned to classes.

“People are not coming because of the pandemic, but I think we are on the cusp of recovery in the next few months,” he said.

Kim is a National Coach for USA Tae Kwon Do and USTigers currently have athletes on the USA National Team that represent USA internationally.

Instructors at USTigers take competition very seriously. Many of the students compete regionally and nationally.

When students compete, they start as a beginner and move up.

They once had a student in his 70s who competed nationally and won!

Students can start competing at the age of six. “There is no age limit, as long as you’re willing to do the work,” Kim said.

Kim said this is important to get to the Olympics. He said Olympics training is not taking two or three classes a week; it takes more than that.

“It is extra hours and more training,” he said. “We don’t just talk about being an Olympian, we actually train for it.

“The Olympics is the final destination for some Tae Kwon Do and sparring students and we do train them,” he said.

For more information, visit their site.