It’s a chilly morning in Woodbridge, and Christopher Gaida and I are standing on the corner of N 38º40’41” and W 77º20’58”, according to his Global Positioning System (GPS) device. Local residents may know it better as the intersection of Prince William Parkway and Ridgefield Road. 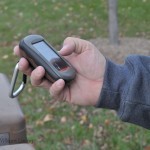 A Global Positioning System device is often essential to finding a
geocache in this modern-day treasure hunt.

My mission this day—to experience the nascent adventure known as geocaching and to find my first cache (pronounced cash)—begins across the street, in front of the Prince William County government center. Chris, who moved here from Alexandria a year and a half ago, has already found hundreds of caches throughout
the area and agreed to be my Sacagawea. I bundled up my jacket, breathing in the spirit of both Lewis and Clark, and then the hunt was on.

Global Hide-and-Seek
At the turn of the century, geocaching was neither a word nor even a concept. That changed in May 2000 when a shift in U.S. policy allowed personal GPS receivers to display much more accurate readings than before. According to geocaching.com, the first cache—then called a stash—was hidden in the Oregon woods the next day. Its coordinates were posted in a newsgroup, and within a few days two people had found the stash and a new game was born.

At its most basic, the game involves using a handheld GPS tracker (available at most electronics or outdoor retailers) or smartphone to find caches that others have hidden, relying on the GPS coordinates and perhaps a hint. The object of the search is a container which holds a logbook or paper to record one’s success, and sometimes small trinkets that can be traded or moved to different locations. Geocaching often combines educational aspects and/or puzzle solving to reach the target, making it a high-tech companion of activities such as letterboxing—think caching with clues and rubber stamps instead of a GPS.

In Prince William, most caches are secreted in parks or wooded areas, but sometimes where you might least expect: schoolyards, libraries, the grounds of the Manassas Museum. When taken as a whole, the numbers are staggering, especially to those unaware of the hobby’s existence (“muggles,” in geocachers’ parlance): roughly 500 caches in Prince William, 16,000 in Virginia, over a million in the United States, and 2.5 million around the world, on every
continent—yes, even Antarctica. 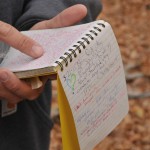 When you find a geocache, make sure to sign the enclosed logbook,and report your success online too.

“Geocaching draws me outdoors to places I might not otherwise have visited,” said Michael Schwandt, public relations director for the Northern Virginia Geocaching Organization (NoVAGO). “[It’s] a game with enough variety that you can make it fit your interests fairly easily. The cost of entry is quite low, especially if you have a smartphone already. You can download an app for free and gather the necessary information to seek your first cache with only a few minutes of preparation.”

Most geocachers in the region belong to NoVAGO and honor its commitment to family-friendly recreation. Manassas Geocachers are the local offshoot with about 45 members on its Facebook page. Led by local father-daughter team Gene and Andrea, the group meets once a month to share their latest expeditions and plan new ones.

“I have made many good friends and I have learned a lot from my time geocaching. I have been to lots of parks, driven on many back roads, and have visited so many obscure monuments because of this sport,” said Gaida, adding, “I also learned the hard way how to identify poison ivy.”

Through either his home computer or smartphone, Chris types in his location and a range of nearby caches quickly appear. They usually are identified by a name (which often serves as a subtle hint), as well as a rating of their difficulty to find and the difficulty of the terrain which one must cross to reach it. It’s a matter of following the compass after that, unless there are other specified steps. Once he is close, Chris relies on what he calls his “geosense,” or, “Where would I hide something around here?”

“I probably dream about this stuff,” he said. “I’m an addict in a way.” He sees himself as a “numbers guy,” someone dedicated to finding as many caches as possible. “When I open my map, I don’t want to see anything in Prince William County that I haven’t [already]gotten.”

Respecting the Environment
As a rule, geocachers respect both the land and those that are responsible for its care. While hunting in a public park, they are careful to not disturb the flora or fauna, or intrude on other park visitors. “Cache In, Trash Out” is a 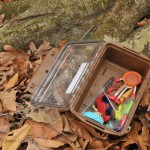 Congratulations! You’re no longer a muggle. Take a toy, leave a toy, or
just pat yourself on the back.

Through a permit issued to NoVAGO, Prince William Forest National Park in Triangle allows 12 caches within its boundaries. All of them are near existing trails and relate to park history. “[NoVAGO] does a good job of making sure that people understand what the regulations are,” said Cynthia Sirk-Fear, chief ranger for the park.

“The geocaching community has come a long way since it first began,” added park deputy superintendent George Liffert. “They want a reputation for doing the right thing. Those that do it the proper way promote a good relationship with the land manager.”

Caches hidden in Prince William County Parks—and there are plenty—must receive advance permission from the Department of Parks and Recreation. Rather than physical containers, Manassas National Battlefield has a few “virtual caches,” in which completion requires answering a question or taking a picture.

The Hunt, Part 2
Our morning expedition first brought us to the pentagon-shaped memorial fountain in front of the McCoart Administration Building. This multi-part challenge was created by NoVAGO member and Chris’s compatriot Kirk Yeager in 2010, and has remained in place ever since.

Accessing the geocaching app on Chris’s phone, we answered a few observational questions based on our surroundings. Plugging in those answers gave us a new set of data points which led us behind the government complex, behind the stadium and BMX track, and into Davis Ford Park. Coordinates hidden in a hollow tree indicated a third mission in a different direction.

We followed a trail into the forest, crunching on fallen leaves, then down a slope, watching as the GPS indicated we were getting closer with every step. My geosense started tingling. One tree down here was more prominent than the rest, and….hey, what’s that big rock doing there at its base, and what’s behind it?

Chris brushed away some leaves and uncovered our Holy Grail: a waterproof plastic container, the size of a small shoebox, which contained, per the custom, a small notebook and pen to record our successful hunt, and some odds and ends for trading (instead, I left a few of my Prince William Living business cards). Then Chris put the container back, covered it up, and left it for the next geocachers to find.

Writer and editor Peter Lineberry remembers the good ol’ days when hide-and-seek meant closing your eyes and counting to 10. He lives in Dale City and can be reached at plineberry@princewilliamliving.com.