No one launches a restaurant to make an easy profit. Alina Mourtaza, owner of Georgee’s Grill, knows firsthand that it takes far more than a sound business model to build and maintain a successful dining establishment. Studies show that most restaurants close within the first year, and to defy those odds, Mourtaza and her family have poured a lot of heart into Georgee’s Grill, which opened in January 2017. “We’ve been open for a little over a year,” Mourtaza said. “The name, ‘Georgee’s Grill,’ is a nod to our American forefathers and to Virginia. It’s also broad enough not to put any implicit ideas or notions about the kind of experience you’ll have when you walk into our space for the first time. We are very meticulous about every sensory aspect, from sight to smell to sound. We curate all of these things with a great deal of consideration. The experience is truly unique, and the name had to reflect that without being heavy-handed.” 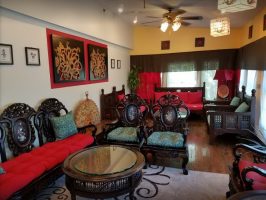 A Melting Pot
When it came to forming a concept for Georgee’s Grill, Mourtaza found a way to merge different elements of her personal history.

“Growing up in the South, combined with my parents’ heritage, exposed me to these seemingly divergent—but actually similar, in some ways—culinary traditions,” Mourtaza said. “I’m the eldest of four, and when I was in high school, my parents were both working, so I took on some dinner preparation duties
because I’d always enjoyed helping whomever happened to be in the kitchen.”

Southern cooking and Afghan cuisine meet frequently at Georgee’s Grill. Mourtaza insists that taste buds often find all the different spices and flavors to be complementary, leading to a satisfying yet different culinary experience.

“All of the dishes on the menu make sense together even if it may not appear that way at first glance,” she said. “The flavors are complementary. We often are asked about the heat factor in our dishes, but unless stated on the menu, there’s nothing eye-wateringly spicy.”

The Georgee’s Grill team has already noticed the fan favorites, too. “The kabobs are all consistently loved by folks,” Mourtaza said. “We have a mint lemonade and Moroccan Mint hot tea that are also popular. Everything is handmade to order and fresh.” 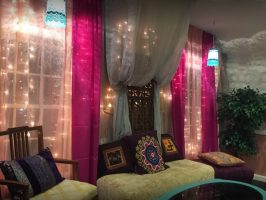 Keeping History Alive
In addition to the cultural blend, this new restaurant also merges with the old as Georgee’s Grill’s business booms out of Russell House, a historic venue. Mourtaza simply couldn’t pass up the chance to run her dream business out of a structure steeped in local history.

The Russell House, she explained, is one of the last vestiges of the rural community that Prince William County once was. “An opportunity came up unexpectedly when a friend of ours told us that the Russell House [now owned by the Prince William County Historical Commission]was available to lease,” Mourtaza recalled. “The space had such an inviting energy and was too steeped in Virginia history to pass up. We have so few of these historical buildings left in this area; it seemed like the perfect place to bring people together from all walks of life. It’s a community space at the end of the day, and even if some folks are forgetting that this country is a beautiful melting pot, we never will.”

“The space itself is completely unique,” she continued. “There are four very distinct rooms, each with its own energy. I had always been enamored with ‘tea culture,’ which like soccer is a big thing almost everywhere else except for the Americas. I used the distinct look and energy of each of the four rooms as my guide; each one reflected the aesthetic qualities of a tea house from a different country.”

A Place to Feel at Home
The hardworking team at Georgee’s Grill has created what they believe is a place not only for people to fuel themselves with food, but also to connect with their community.

“Our guests leave happy, and we’ve been fortunate enough to receive their praise online, and we consider that as our biggest success,” she said. “We don’t take people’s time or money for granted, so we aim to give the best possible service and food as possible. Our guests can see that, which is great.”

Alina has her husband, Joe Mourtaza, to thank for these satisfied customers. “I run the front of the house, taking care of our customers,” Joe said. “I make sure they are treated like they are guests entering our home.”

In some ways, patrons are entering the Mourtaza home when they walk in the doors of Georgee’s Grill: Alina, Joe and their daughter work at the restaurant.

“It is very much a family affair,” Joe said. “My daughter, Iman, comes in every day to help run Georgee’s. She serves guests, makes our desserts and helps with other creative tasks. We have our moments as we are together 24/7, but there is no one else I’d rather be doing this with.”

In addition to sharing the dream of opening a restaurant, Alina and Joe are also in sync with their goals for Georgee’s Grill. “My goal is to continue what we are doing now, serving the community with delicious, authentic, homemade food from the heart,” Joe said, a sentiment that Alina echoed.

They will keep working to ensure a pleasant diner experience, too. As of now, there are lunch and dinner specials throughout the week. Reservations are accepted, but the Mourtazas also work hard to keep a relaxed atmosphere.

“Reservations are a good idea from Friday through Sunday but not required,” Alina said. “We just ask that guests are patient during our busy dinner service hours and the weekends because as I said, everything is made in-house and takes time. There aren’t painfully long waits, but it’s also not a fast-food joint. We want people to relax and enjoy the space, company and food, and even have tea after dinner. There’s no rushing our guests out the door.”

The Mourtaza Family’s Next Chapter
The essence of the American story is that everyone’s personal history conglomerates to form something better, and special, and Alina is everyday forming her own piece of the puzzle within her restaurant walls.

“This is a celebration of the American experience, and mine just happens to be from the perspective of a first-generation American from pre-Soviet era Afghanistan,” Alina said. “I didn’t want the culinary practices of that country to fade away. There’s a real fear of losing parts of the culture that existed before over thirty years of war.”

Ashley Claire Simpson (asimpson@princewilliamliving.com) is a corporate communications professional by day, but her real passion is learning more about this community and the world by writing. She has been crafting features and human interest articles since her college newspaper days at the University of Virginia.