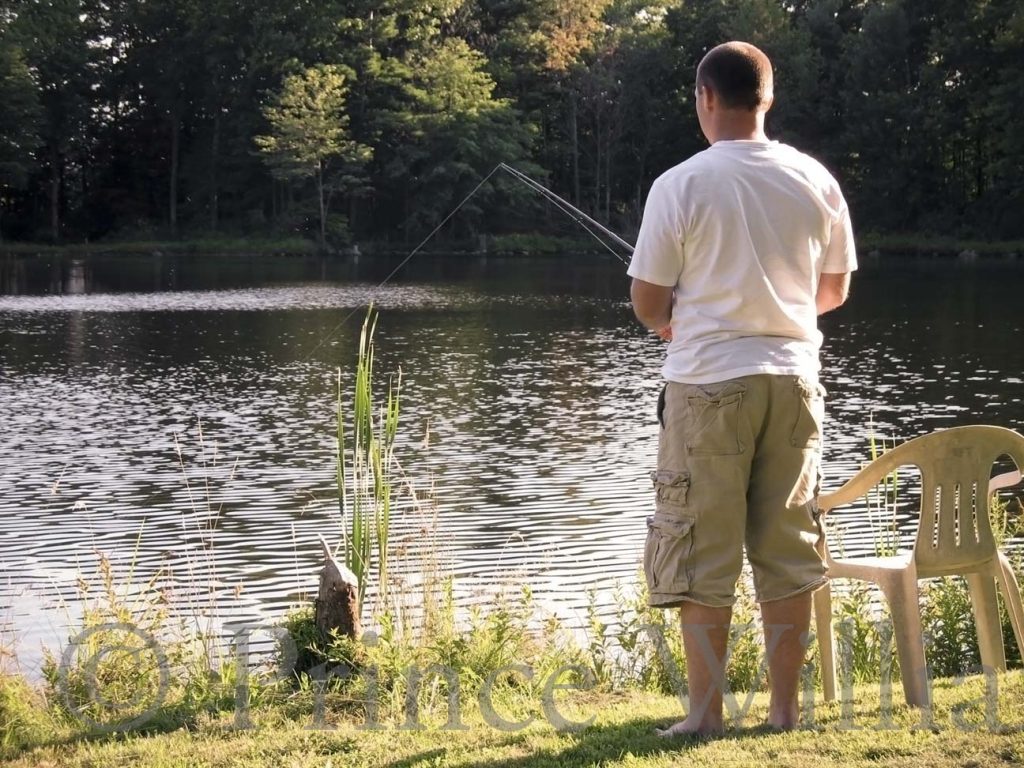 When I arrived at the Freestone Point pier at Leesylvania State Park one breezy sunny morning, Reddie Guy Jones was the only fisherman there. The 87-year-old Triangle resident, a U.S. Army veteran of the Korean and Vietnam wars, doesn’t fish as often as he used to, but clearly he still enjoys it. Casting his line several yards into the rippling Potomac, Jones watched as the tip of the reel twitched from time to time, but to no avail, causing him to remark good-naturedly, “He must not have liked my worm.”

Growing up in rural Mississippi, Jones remembered fishing as a source of food and a virtual way of life, from “as soon as I was big enough to walk from my house to the water.” Because it had evolved into a pastime where patience is a virtue, we chatted, enjoyed the fresh air, and waited for that bite.

Getting Started
Prince William is fortunate to not only have the Potomac River on its eastern border, but a multitude of lakes and streams suitable for fishing, including those found in three county parks. If fishing—whether as a catch-and-release hobby, a sport or a dinner option—runs in your family, chances are you already
knew this. But what if, like me, you didn’t? 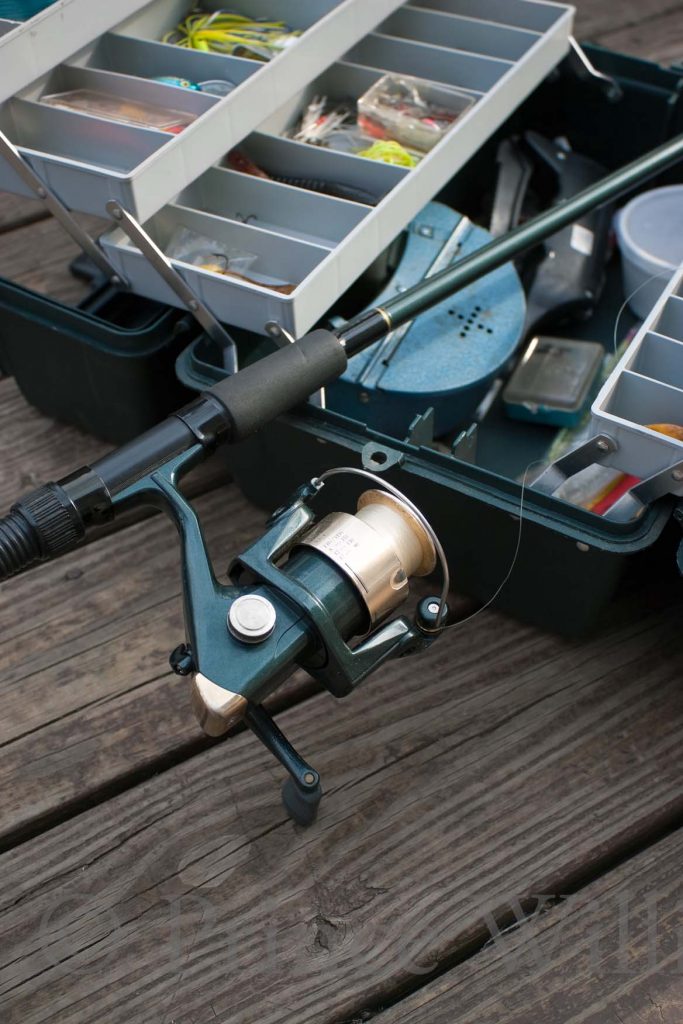 Your first step might be to visit the fishing department of one of the county’s outdoors retailers, such as Cabela’s (Gainesville), Gander Mountain (Woodbridge—but closing soon) or Dick’s Sporting Goods (three county locations), which began as a New York bait and tackle shop in the 1950s. At the basic level, you’ll
need a rod and reel (sold separately or in combos), monofilament fishing line, and bait ranging from live nightcrawlers to artificial Woolly Buggers. From there you can expand your tackle box contents and learn some angling lingo. For example, Cabela’s has helpfully marked aisles for chatterbaits, crankbaits, spinnerbaits, jigheads and thingamabobs (OK, not really the last one).

You could also try your hand at fly fishing, in which case proceed directly to Orvis in Woodbridge. The Stonebridge at Potomac Town Center store specializes in fly-fishing gear like more lightweight rods, waterproof waders so that you can fish directly from the source, and amazingly detailed fly lures. Orvis
even offers free Fly Fishing 101 classes, such as the one I took in the spring; after a couple hours of attempted practice-rod casting and knot tying, I came to realize why Brad Pitt was selected instead of me to star in the fly fishing opus “A River Runs Through It.”

The final piece of the puzzle is getting a fishing license, a necessity for those 16 and older. A standard one-year, freshwater license for state residents is $23. The Virginia Department of Game and Inland Fisheries (DGIF) uses these fees to protect and maintain fish populations. Licenses are available at the
aforementioned retailers as well as at Walmart or online at gooutdoorsvirginia.com.

Three County Parks…
So now you have your equipment, but aren’t ready to go after Jaws quite yet. In an effort to stay local, we turn to Janet LaFleur, community centers and parks operations manager for the Prince William County Department of Parks and Recreation, for insight about fishing opportunities at three county parks. “Each park has its own unique value as far as what it offers in terms of amenities and different ways to fish. The scenic value for each park is different as well,” she said. “We would like to say that the experience and opportunity that each park presents is one that we would like customers to explore.”

Locust Shade Park in Triangle, adjacent to Route 1 and immediately south of the National Museum of the Marine Corps, is home to Lefty Hamilton Pond, named in memory of a beloved longtime park ranger. The eight-acre pond is popular with many local anglers, including Gander Mountain fishing specialist Shad Lofgreen. Bluegills (which a posted sign at the park calls “an excellent fish for the beginner….easily caught and a great teaching tool”) and largemouth bass can be found in abundance, as well as
trout which DGIF stocks from November to April.

Follow your way down a mile-long gravel entranceway from Antioch Road in Haymarket, and you’ll discover the hidden gem that is Silver Lake Regional Park. Fed by Little Big Run Stream, the picturesque 23-acre lake can be fished on the banks or on your own non-motorized boat, and is home to plentiful bass, catfish, crappie and bluegills. LaFleur emphasized that Silver Lake is a passive, “leave no trace” park; visitors will find no trash cans and are expected to take out everything they brought in.

The most centrally located of the three, Lake Ridge Marina is a bit of a misnomer, as it’s actually a cove of the Occoquan Reservoir. Located at the end of Cotton Mill Drive in Woodbridge, the park is popular with Canada geese, ducks and area high school crew teams. From Memorial Day to Labor Day, its marina is open daily for boat rentals (canoes, kayaks or jon boats), bait purchases and various other concessions.
“I fish because of the possibility of catching the big one,” said Adam Schuster, a youth pastor from Lake Ridge, who was fishing from the piers near the marina. “The most exciting experience anyone can have is seeing a bobber go under because it’s the unknown. Every time, my heart races.” On another pier, both
with reels in the water, stood Mike Kraus of Dale City and his son Max, 9. Max had inverted the normal hand-me-down progression by showing his interest in fishing first and passing it onto his dad. “He was into nature—catching caterpillars and all. This was right up his alley,” Mike Kraus said. Max had wrangled a few small bluegills using bits of bread and hot dogs, but would release them from his bucket at day’s end.

…One State Park
There are myriad reasons to spend time at Leesylvania State Park (Daniel K. Ludwig Drive, Woodbridge, $5 per vehicle admission)—including hiking, boating and picnicking—but few pleasures can match the ability to fish (or spectate) along wide expanses of the Potomac River. Members of the volunteer group
Friends of Leesylvania hold a Kids Fishing Tournament for ages 2-15 on the first Saturday of every month from 9:00–11:00 a. m., May through September. “We figure that if we can get kids fishing
at an early age…and they take ownership of the rivers and areas that they fish in…they will probably prefer to be outside doing things within nature and trying to understand the world a little bit better,” said retired teacher Don Fear, who has volunteered at the park for more than two decades.

The kids tournament takes place close to shore, but at the park’s far end stands the 300-foot pier at Freestone Point, most of which extends into the boundaries of Maryland though a Virginia license is fine. Here largemouth bass are still commonly caught, along with rockfish, perch, mackerel, croakers, eels, and
sometimes the invasive and destructive snakehead. With a proper permit, you can even fish on the pier at night after the park is closed, maybe even until the sun comes up.

This brings us back to Reddie Jones, whose patience was finally rewarded when his line grew taut and began to wriggle with clear intent. “Pretty good one!” he exclaimed, and before long his weathered hands had reeled in the morning’s first catch, a catfish estimated at a pound and a half and more than a foot long. He bequeathed his prize to three Marines, who by then were fishing nearby; they wound up catching several others, and it’s safe to say a catfish fry was planned for that evening.

Because sometimes when fishing, the “one that got away”…. doesn’t get away after all.

Peter Lineberry wants it known that he was lured into writing this article, and of course fell for it hook, line and sinker. He’s always fishing for compliments at plineberry@princewilliamliving.com.