The park was originally established by two brothers as the home of the National Chauquatua of Glen Echo.  After failed business deals, the site was converted to an amusement park. By the 1950s, however, other amusement parks began to attract crowds away from Glen Echo.  The park closed in 1968.  From that time on Glen Echo Park was a thing of the past – but not for long.

The National Park Service took ownership of the site in 1971, and many of the surviving structures were converted into art studios and classrooms.  Visitors can observe an artist at work or their artwork on display, and there are a variety of classes, from painting to sculpture to music.  The Spanish ballroom and the old bumper car area are used as event space.  Dances are held here regularly.

Glen Echo offers puppet shows at the Puppet Company and musical shows or plays at the Adventure Theater Music Theater Center (Adventure Theater MTC).  And wWhat is an amusement park without a ride on a carousel?  The original carousel is open during the warm months.  (The carousel is currently under maintenance.) 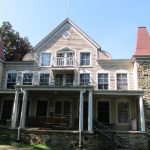 Other sites to see include the Glen Echo Aquarium, the Glen Echo Park sign with the original streetcar tracks, the façade of the Crystal Pool (which was a swimming pool) and small ruins of what was an amphitheater by the creek.  For more information, visit glenechopark.org.

Both sites are owned and operated by the National Park Service; the art studios, classes and shows of Glen Echo Park are operated by the Glen Echo Park Partnership for Arts and Culture.  Although entry into both places is free, admission is required for the classes, the carousel, the aquarium, shows and dances.

The town of Glen Echo was established by brothers Edward and Edwin Balzley.  It is unknown how they came up with the name ‘Glen Echo’, but they originally named the town ‘Glen Echo on the Potomac: The Washington Rhine’.  Glen Echo is a much more manageable title, established as a peaceful oasis from the city.

Glen Echo, Maryland is located just off Interstate 495 and the American Legion Bridge by way of the Clara Barton Parkway.  (Trucks must use Maryland Route 190 East to Maryland Route 614 South.)  It is a place where you will go back in time while still in the present.