At a ribbon-cutting ceremony this morning attended by federal, state, and local officials including Virginia Governor Glenn Youngkin, Virginia Secretary of Transportation W. Sheppard Miller III, and Virginia Department of Transportation (VDOT) Commissioner Stephen Brich, joined by executives of I-66 Express Mobility Partners (a consortium of private developers Cintra, Meridiam, and APG) and design-build contractor FAM Construction (a joint venture between Ferrovial Construction and Allan Myers), the 66 Express Lanes Outside the Beltway were officially opened for service. 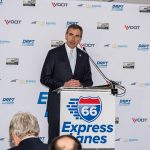 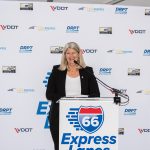 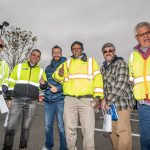 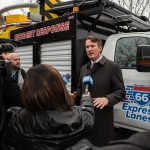 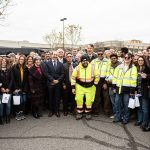 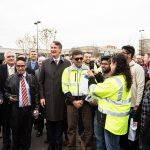 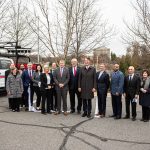 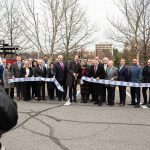 The multi-modal mega-project – the largest public-private partnership (P3) infrastructure project in the United States this century – has been funded by $3.7 billion in private investment, including approximately $2.2 billion in design-build costs, $350 million in future I-66 corridor improvement, $800 million in transit subsidy over the 50-year term of its contract with VDOT (through 2066), and an up-front $579 million concession-fee payment to fund additional transportation improvements along the I-66 corridor. Taxpayer funds were not used to design or construct the 66 Express Lanes Outside the Beltway, and a $600 million subsidy for project costs was returned to the Commonwealth of Virginia.

“Today we celebrate the opening of the 66 Express Lanes Outside the Beltway, a critical project in the Transform 66 initiative that will move more people through Northern Virginia while meeting current and future traffic demands,” said Luis Vazquez, CEO of I-66 Express Mobility Partners. “For the estimated 200,000 vehicles that rely on I-66 daily, the 66 Express Lanes provide relief from daily congestion with a consistent, reliable travel choice for both commuters and commercial vehicles. Thanks to strong collaboration and an innovative public-private partnership with VDOT, together we opened one of the nation’s largest transportation improvement projects ahead of schedule.”

The final section of the new 66 Express Lanes opened ahead of schedule Nov. 22, completing the full 22.5 miles of express lanes from the Capital Beltway (I-495) to the western terminus in Gainesville. The 66 Express Lanes between Gainesville and Route 28 in Centreville opened to drivers Sept. 10, and the westbound lanes from I-495 to Route 28 opened Nov. 19.

“We’d like to thank FAM Construction, our tolling system integrator Indra, and all the subcontractors and suppliers who worked tirelessly to deliver the 66 Express Lanes ahead of schedule,” said Luis Tejerina, Deputy CEO of I-66 Express Mobility Partners. “This project includes stronger pavement on the general-purpose lanes, reconstruction of interchanges, replacement of bridges and other infrastructure. The 66 Express Lanes Outside the Beltway project is a great example of what can be accomplished when we work together toward a common goal.”

A total of 63 bridges have been renovated or newly constructed, including 11 at the I-495 interchange and 13 at the Route 28 interchange. Two new park-and-ride lots, located at University Blvd in Gainesville and Balls Ford Rd in Manassas, provide more than 4,000 spaces for commuters.

The project also includes safety and operational improvements at key interchanges like I-495, Route 28, and Nutley Street; auxiliary lanes between interchanges; new and expanded commuter bus service; and bicycle and pedestrian paths and connections throughout the corridor, including the new I-66 Parallel Trail. Construction of some project features, such as final interchange improvements and the shared-use path adjacent to the corridor, will continue following the opening of the Express Lanes, with project completion expected in mid-2023.

The 66 Express Lanes are toll-free for motorcycles, school buses, and eligible High Occupancy Vehicles (HOVs) with an E-ZPass Flex transponder set to “HOV On” mode. Starting Monday, Dec. 5, vehicles will need to have three or more occupants, rather than two or more, to qualify as HOV on I-66. This change from HOV-2+ to HOV-3+ will apply across the entire I-66 corridor, helps meet regional goals for moving more people with fewer vehicles, and is consistent with HOV requirements on other express lanes around Northern Virginia.

The project has already benefited the local economy by engaging more than 400 local and regional subcontractors and suppliers while exceeding its goal of hiring Disadvantaged Business Enterprises, committing more than 20% in construction contracts to DBE contractors. Additionally, sustainable practices were used in construction, including repurposing more than 430,000 tons of rubblized concrete and 1 million tons of rubblized stone from the existing highway, thereby reducing the amount of material transported by heavy trucks.

About the 66 Express Lanes Outside the Beltway

Part of VDOT’s Transform 66 Outside the Beltway program, the 66 Express Lanes are a transformative 22.5-mile multi-modal mega-project featuring advanced dynamic-tolling systems to keep traffic flowing at all times. The lanes provide Northern Virginia commuters, businesses, and mass transit with a reliable option to move people, goods, and services throughout the I-66 corridor, allowing drivers to Sit Less, Live More. Visit Ride66Express.com to learn more and keep up with the 66 Express Lanes on Facebook and Twitter.

About I-66 Express Mobility Partners

I-66 Express Mobility Partners (EMP) is a consortium of leading infrastructure companies including Cintra, Meridiam, and APG. In public-private partnership (P3) with the VDOT, I-66 EMP is contracted to operate the 66 Express Lanes Outside the Beltway through 2066. Connect with I-66 EMP on LinkedIn.