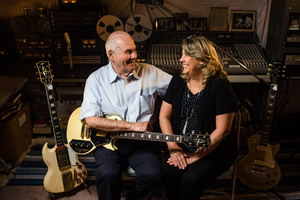 George Bowley and his daughter, Laurie Dupuis, have been recording music for more than 30 years.

Members of the community of a certain age might remember the songs of Les Paul and Mary Ford, who were on radio and television and played other venues during the early 1950s. They might also know about some of Paul’s pioneering efforts in the art of magnetic tape overdubbing and his unique and infamous multiple guitar and vocal recording style. The musical duo was enormously popular and formed part of the soundtrack of many lives.

Les and Mary are gone now, but Haymarket residents George Bowley and his daughter Laurie Dupuis have brought that style of music and song back, recording creative new arrangements of old and new song favorites using multiple guitar and vocal stylings reminiscent of the 1950s.

Decades of Experience Pairs with Perfect Pitch
None of this would have been possible had Paul not envisioned his “New Sound” and used the recording technology available at that time to maximum advantage. His decades of experience as a jazz guitarist combined with Mary Ford’s perfect pitch and history as a guitar-playing country music artist created a perfect marriage of both musical talent and personal compatibility.

It wasn’t long before Paul and Ford were creating multi-track recordings and producing hits like “How High the Moon” and “The World Is Waiting for the Sunrise.”

When George Bowley first heard their music recordings back in 1950, he made it his life’s goal to learn how to play the guitar in that style and master the recording processes that Les used to create this fascinating sound. It took years of practicing, slowing down to dissect and characterize every one of his recordings, arrangements, and guitar licks, and making hundreds of trial-and-error overdubbed and multi-tracked recordings of his own.

To be able to so closely recreate Les’s characteristic recording and playing style, George also spent valuable time with Les Paul himself and with his 1950s engineer Earle Davis. Having heard some of George and his daughter Laurie’s recordings, Les Paul had exclaimed to those present at the Iridium Club in downtown Manhattan that George and Laurie were “the only two people I have ever heard in my lifetime who have exactly duplicated the sound that Mary (Ford) and I had in the 1950s.”

Les Paul loved George and Laurie’s recordings and was fully supportive of their efforts to replicate “his” sound, as well as their use of new technology to do so. In fact, during a later weekend visit to his home in Mahwah, N.J., Les told George that it was obvious that they had both travelled the same trial-and-error
paths of experimentation, successes, failures, and perseverance— and that he considered George to be his recording equal.

A Family Affair
Laurie Dupuis, George’s youngest daughter, acquired an early interest in music and quickly became an accomplished vocalist and student of music theory while in high school. She soon joined her father to become an equal partner in their future recording activities. She has natural musical talent and timing
instinct for recording multiple voice tracks and for creating flowing background vocal harmonies in their recordings. Her radio listening fans continuously comment on the sweetness and clarity of her voice.

The duo has been recording together for more than 30 years (and George for 65). Their unique multiple guitar and vocal jingles were heard on a popular nationally syndicated radio show for more than fifteen years. In the 1990s, they recorded a karaoke album of “Les Paul and Mary Ford Hit Songs” for Pocket Songs (a subsidiary of the Music Minus One label in New York) that was distributed internationally by the Hal Leonard Publishing Company (and highly praised by Les Paul himself).

George and Laurie record their music using modern digital computer workstations combined with older analog multi-track tape capabilities as needed. Although they still try to preserve the sound and feel of the original monophonic overdubbing tape process, they can now also take full advantage of the total stereo field and of today’s many digital recording and signal processing techniques made possible by technology. With that, they are now able to recapture Les Paul and Mary Ford’s unique style of music.

“In addition to our own full-time careers,” Bowley said, “we have managed to be musically active here in the D.C. area on both radio (WMAL, WPIK, WJFK, WAMU, etc.) and on nationally syndicated television and radio. Last year, our single recording of ‘Bye Bye Blues’ was considered for a Grammy nomination as
Best Arrangement by the Recording Academy.”

“We mainly record and only do infrequent performances, but we were the opening act for the Everly Brothers Experience Show at Heritage Hunt in April,” he added.

Their first commercial CD release, “Guitars In Sync—Music in the Les Paul and Mary Ford Tradition,” preserves memories of that familiar Les and Mary “sound” and provides a refreshing new take on that sound for new generations of music lovers. And we are all fortunate that they have kept that kind of music alive.

For further information about George and Laurie’s music, go to guitarsinsync.com.

Dan Verner (dverner@princewilliamliving.com) is the author of several books and was named “Best Writer in Prince William County (Virginia) for 2014 and 2015 by readers in a “Best of Prince William” poll taken by Prince William Today newspaper. Find out more about him at danverner.com.