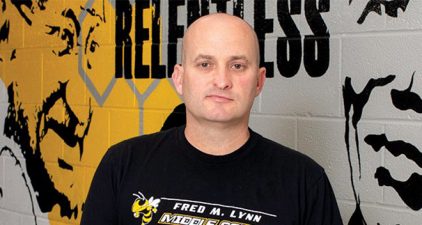 Northern Virginia Magazine has selected Hamish Brewer, principal of Fred Lynn Middle School, as a 2018 Northern Virginian of the Year. Brewer was recognized with this honor for the impact his hard work and dedication have made on his students, school, and community.

In just one year as principal of Fred Lynn, Brewer has made positive changes to the school. The walls now display inspirational murals, existing lightbulbs have been replaced with daylight lightbulbs, improvements have been made to the greenhouse and woodshop, extracurricular event participation is now free to students, and unlimited field trips have been implemented.

“I want our school to be the beacon of the community again, the lighthouse for the community,” shared Brewer.

Brewer joined Prince William County Schools in 2012, where he served as the principal of Occoquan Elementary School. Under his leadership, Occoquan Elementary was named a National Title I Distinguished School by the National Title I Association, recognizing its achievements in educating children from low-income families. Occoquan is the first in Prince William County to have earned this recognition. Brewer was also named the 2017 National Distinguished Principal by the Virginia Association of Elementary School Principals.