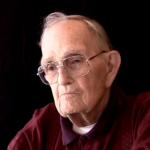 As we celebrate the Coast Guard’s birthday in August, we spotlight the service of Bill Cowper who served during World War II. William Cowper entered the United States Coast Guard from Lockport, New York, immediately after his graduation from high school in 1943. Only 17 years old, he completed boot camp and transferred to Camp Lejeune, where he trained to operate amphibious personnel landing craft. After about a year of joint training with the Marines, Seaman Cowper and his crew boarded the USS SHELIAK (AKA-62) in New York and began their journey to the Pacific Ocean, via the Panama Canal.
The transit took SN Cowper to several memorable stops along the way, which included Pearl Harbor and the recently liberated Philippines. He made it to the tip of the spear in time to participate in the Battle of Okinawa, which began on the April 1, 1945.
SN Cowper describes in detail his two landing runs on Okinawa where they met no resistance from the shore, and his eyewitness accounts of the kamikaze attacks on the larger naval vessels. After the Japanese surrender, he and his shipmates returned to Norfolk, Virginia. He was discharged in 1946. See the full interview here: americansinwartime.org/war/bill-cowper/.
Share. Twitter Facebook Google+ Pinterest LinkedIn Tumblr Email
Previous ArticleYellow for Caution
Next Article Dale City Library Scheduled to Close for Renovations