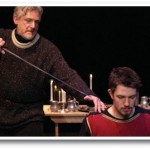 Whether you are a patron of the arts, or just looking for a fun family activity that your loved ones will enjoy, then catch a show hosted by community theater group Vpstart—pronounced “Upstart”— Crow. Created in 1994, this group got its start, and its name, by performing the work of William Shakespeare. “The reason it’s spelled like that is a reference to back in Shakespeare’s time. One of his contemporaries [Robert Greene, in a cantankerous mood] referred to him as an upstart crow, but when you wrote it, the ‘u’ was like a ‘v’,” said Shellie Jablonowski, the managing director and public relations director of the troupe.

In its early years, Vpstart Crow oﬀered only Shakespearean shows, but in 2000 they decided to widen their scope of theater choices – and have never looked back. Currently located at the Hylton Performing Arts Center, at the Prince William Campus of George Mason University, Vpstart Crow has become a beacon for those with a theatrical side. “Vpstart Crow is blessed to be one of the resident arts partners at the beautiful Hylton Center.

The theater space that we work in is state-of-the-art, convenient and easy to park at – all of which makes it accessible to the community,” said Lisa Anne Bailey, Vpstart Crow’s new artistic director.

While Vpstart Crow plans to maintain their identity and rich history, they are looking to a bright future, with several other new team members and a restructuring to better complement existing strengths. “It’s a new start for Vpstart Crow. We have a lot of new people and new faces who are bringing in a lot of ideas,” said Jablonowski.

Part of this task has been to form a new board of directors for the group, with a collaboration of both acting professionals and community theater lovers, to structure the group for success. Bailey is one of these additions who is making a positive change and keeping the group exciting to the community. “I am new to Vpstart Crow,” Bailey said. “I have been aware of their existence and seen many of their productions over the past 18 years. I have watched the organization grow and change and had a chance to be in one of the productions.” In her role as artistic director, she juggles the responsibility of choosing productions that challenge the cast and gain positive reception from viewers. Additionally, Bailey serves on the board of directors.

Moving forward, there will be greater focus on what the community wants to see, which is one aspect that sets Vpstart Crow apart from many theater groups. “We’re actually going to be adding in some fun elements and we’re also going to be asking our subscribers for their input. We want to do what they want to see; we want their thoughts. We want to improve – we really want to draw more people and this is a lot of change, but we’re not going to ﬂinch from it, ” explained Jablonowski.

This fresh take on things led to Vpstart Crow taking on its ﬁrst musical. “We will be presenting an evening of song – cabaret style – on December 7th and 8th, with the musical ‘Unexpected Broadway,’” said Bailey.

Behind the scenes, so to speak, ﬁnancial support from Prince William County and donations from supporters and local businesses help to make possible such performances as the September run of “Arsenic and Old Lace” and this month’s “A Christmas Carol.”  Additionally, Vpstart Crow relies on the talent of a diverse mix of individuals in the cast and crew to make productions unique and fun for audience and performer alike. The group casts actors of all ages and from all experience levels.

“We pull from the local community, from professionals, some people who have just done community theater – our doors are open,” said Jablonowski. This philosophy means that people curious about taking a shot at theater have an opportunity to do so.

For community members like Jean Gentry, Vpstart Crow has become a welcome creative outlet. “I’ve been with Vpstart since [auditioning in]2009,” she said. “Since then, I’ve acted, searched for props and furniture, produced three of the plays, painted sets and generally done whatever I could do to help put on a production. It’s been great fun meeting and working with people who are dedicated to theater…this has been a chance for me to practice a craft and let the kids know that the old broad can make a contribution in many ways.”

Whether you seek to test out your acting chops or are just planning a fun evening out, Vpstart Crow oﬀers a quality theatrical experience that brings the community together.

She resides in Woodbridge. She can be reached by email at stipple@princewilliamliving.com.