You may not know it based on the latest slick-looking motorcycles that could hypothetically take you where you want to go at nearly 200 miles per hour with more than 170HP, but motorcycles have actually been around since the late 1800s. Though they didn’t really gain popularity until the 1900s, motorcycles have come a long way. What was simply a motor-powered bicycle and a mode of transportation has evolved into a community builder with a great following of people who support each other, as well as a variety of causes. 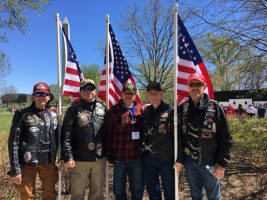 Motorcycle clubs and organizations may seem exclusive to some people, but in fact, many are extremely inclusive and welcoming. Virginia Patriot Guard Riders District 9 Assistant State Captain and Arlington National Cemetery Ride Captain Patrick Segui (a.k.a. “Frenchy”) started riding motorcycles at age 14, and now at 68 years young he has been involved in the local Patriot Guard Riders (PGR) motorcycle organization for many reasons. One major reason is because of the inclusiveness and welcoming nature of the group, even for someone like him who was born outside of the U.S. and never served in the military.

“I was born in France and moved to the U.S. in 1970,” said Segui, “and I always felt like something was missing in my life until I was watching the news with a friend, and the Westboro Baptist Church of Kansas was protesting at the funeral of a U.S. serviceman who was killed in action. I told my friend that
I wished I was younger so I could join the military, as I was disgusted with their signs about hating our military. That’s when my friend told me about PGR, and I signed up.

“I felt very welcome, and after doing many missions I became a ride captain, which is the person in charge of the mission. When the assistant state captain in charge of my district resigned, he put my name in for the position, and when I asked him why, his answer was ‘Because your heart is in the right place.’ For someone like me that never served in the U.S. and was born in France, it was an honor bigger that anyone can ever comprehend.”

Why is the PGR motorcycle club important for our veterans? “It shows them that we care and we are willing to stand for them as they once stood for us,” said Segui. “PGR also brings people together, and at some missions, the community comes out to support our veterans and us for what we do.”

Other than funerals, deployments and home dedications where wounded heroes are given a key to their new homes free of charge, PGR is also involved in the Snowball Express. The Snowball Express is a holiday program sponsored by American Airlines that sends the children of soldiers killed in action on a
four-day vacation to Dallas, Texas, home of American Airlines’ headquarters.

“I have to say that standing for those who stood for us at a funeral is really special,” said Segui. “It is an honor bigger than me.” When asked why they do what they do, Segui answered, “Because it is the right thing to do and that truly says it all.” 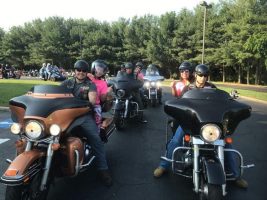 The Combat Veterans of America Motorcycle Club rides out for one
of the annual Rolling Thunder demonstrations that take place the Sunday of Memorial Day weekend.

Another motorcycle group, the Combat Veterans of America Motorcycle Club (CVAMC), is composed of military veterans and friends of veterans who share a passion for motorcycling, without regard for race, color, religion or gender, according to their website, cvamc.com.

When asked what led him to join CVAMC, Matt “LoCo” Paschal from Manassas said, “I joined the club to find a brotherhood of veterans with similar backgrounds, values and a passion for riding.” Paschal has been a member since 2002, and riding motorcycles gives him a “feeling of peace and a means to get my thoughts in order. It gives me an outlet [from]the hustle and bustle of everyday life.”

Some highlights of CVAMC local events include an annual Memorial Day ride to Quantico National Cemetery to “place flags on [the graves of]our fallen heroes and commemorate them for their service and sacrifice to our nation,” said Paschal, who also serves as CVAMC treasurer and is a U.S. Army chief warrant officer. “Other motorcycle groups and clubs from around the area join them in the ride, including Rolling Thunder, Rough Riders, and all our brother chapters from Ohio, North Carolina, Southern Maryland and Southeast Virginia.” The next day, they ride to the Pentagon to participate in Rolling Thunder.

Most people have probably heard of Rolling Thunder, a 501(c)(4) nonprofit organization with more than 90 chartered chapters throughout the United States and members abroad. While the group’s first demonstration was in 1988, it was incorporated in 1995 and is known for its advocacy for prisoners of war (POWs) from the Vietnam War and missing in action (MIA) service members of all U.S. wars.
According to the group’s website, rollingthunder1.com, many Rolling Thunder members are veterans and ride motorcycles, but neither is required for membership: “Rolling Thunder members are old and young, men and women, veterans and non-veterans. All are united in the cause to bring full accountability for the Prisoners Of War-Missing In Action (POW/MIA) of all wars, reminding the government, the media and the public of our watchwords: ‘We will not forget.’”

Forrest Lingenfelter of Dale City was attracted to the motorcycle group called the American Legion Riders (ALR) when joining the American Legion after retiring from the U.S. Army. “I began riding street bikes in my mid-50s, and it provided me with practical transportation, enjoyment and exercise, but also access to a brotherhood,” said Lingenfelter. “It allowed me to socialize with other veterans who were interested in motorcycling.”

Not Just for Veterans

While most of the motorcycle clubs and organizations covered here so far are associated with veterans or supporting veterans, other motorcycle organizations support different community members as well. Other groups have created and celebrated other community members via motorcycle organizations
like the Fire and Iron Firefighters Motorcycle Club. Fire and Iron is composed of fire and rescue employees, dispatchers, support personnel and sponsored members from fire and rescue departments. Two local chapters include Stations 25 and 161 and are made up of members located in the Northern Virginia region and Washington, D.C., though they are primarily centered in and around Prince William County.

According to its website, fireandironstation25.com, the club’s mission is “to provide a means for members to ride and develop friendships in and around both the fire and rescue and motorcycle enthusiast communities.”

The Prince William area chapter was chartered in 2003 and has continued to grow in members over the years. “As we continue to grow in number, we have become a close-knit club, bringing motorcycling brothers and sisters from the fire and rescue family together to share a common interest of camaraderie and the road,” as noted on the club’s website. The organization has participated in numerous fundraisers, toy runs, funeral support activities and other charitable events as well as cross-country road trips.

Even their club patch has meaning and symbolism behind its design: “The main club patch is representative of fire department symbolism emblazoned upon motorcycle pistons, combined with a lower rocker that identifies the station number (chapter) and general community location. It is neither a territorial representation nor claim of any sort. We share the road, with respect, to all other clubs and we expect the same in return.”

Station 25 doesn’t work alone either. The club endorses safe riding programs to include the Motorcycle Safety Foundation (MSF) basic and experienced rider courses and supports other motorcycle organizations and functions to include Patriot Guard Riders, ABATE (an organization representing the rights of motorcyclists), Harley Owners Group (H.O.G.), Toys for Tots and more.

Most people have heard of Harley-Davidson motorcycles, but may not know that Harley dealerships sponsor local Harley-Davidson owners’ group chapters. The local chapter, called Manassas, Va. H.O.G. Chapter #4315, is sponsored by Bull Run Harley-Davidson located at 9321 Center Street in Manassas.
William Turner, director of the Manassas H.O.G chapter, started riding motorcycles because “Riding a Harley is the ultimate expression in American freedom.”

Turner joined the local Harley owners group specifically to “ride and have fun with like-minded individuals.” Some of the activities the group does to support the community and each other include the chapter rides in the Manassas St. Patrick’s Day, Veterans Day and Christmas Day Parades. They also do road cleanup several times a year in Manassas. 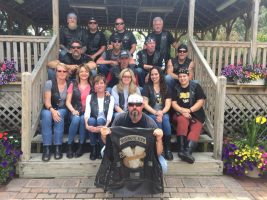 Members of the Dissident Sons Motorcycle Club, as are many other
motorcycle clubs, are extremely active riders and frequently support
charities.

Another local motorcycle club is the Dissident Sons. “Jersey,” a.k.a. Bob Gingell of Sterling, joined the Dissident Sons Motorcycle Club for several reasons. Of course, he liked the members and knew they were good folks, but he also appreciated that they knew how to ride and that they rode a lot. He also “knew that riding in a group that rides together often is much safer than riding alone.”

He was also impressed that the Dissident Sons are extremely active in local communities, as are many other motorcycle clubs. “We frequently support the charitable efforts of other clubs, and we do our own charity events as well,” said Gingell. “This year we will host a poker run on September 15 that benefits the nonprofit organization Stop Soldier Suicide.”

Gingell’s love for motorcycles started early as he was “always attracted to mechanical things as a kid and the motorcycles of that time just looked incredible. The feeling of freedom you get when riding a bike can be very addicting and it didn’t take long for me to get hooked.”

A motorcycle club can also become like family. The members support not only community charities, projects and events, but they also support each other. They get together to ride and have fun and enjoy each other’s company, but as Gingell said, “There isn’t anything better than spending time with family, and that’s what a motorcycle club is…family.”