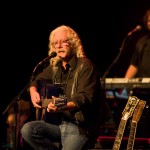 This this solo concert commemorates the centennial of the birth of his father, Woody Guthrie. In this stirring concert, the younger Guthrie honors his father’s creative genius and profound impact on American music through renditions of his father’s songs, as well as his own work in which Woody’s legacy shines. A pre-performance discussion, free to ticket holders, begins 45 minutes prior to the performance in the Hylton Center’s Buchanan Partners Art Gallery. Prince William Hospital is the 2012-2013 Hylton Presents Season Sponsor.

Born in Coney Island, N.Y. in 1947, Arlo Guthrie is the eldest son of American songwriter, singer and philosopher Woody Guthrie, a “Dust Bowl Troubadour” who drew attention to the downtrodden and disenfranchised of America through his music and politics, and continues to inspire countless singer-songwriters, even today. Guthrie was always amazed by his father’s musical brilliance, and growing up, he often witnessed him and many of his contemporaries making music together. Throughout his career and in “Here Comes the Kid,” Guthrie has paid homage to his father and his creative genius, and Woody’s legacy is clearly defined in his son’s own body of work, as well as his commitment to political and social activism, his humor and his gift for storytelling.

Arlo Guthrie became a household name in 1967 with the release of his album, “Alice’s Restaurant,” which helped usher in a new commitment to social consciousness and activism among the generation that came of age in the 1960s. Guthrie has since entertained countless fans across the globe with his incredible mastery of the piano, six and 12-string guitars, harmonica and more than a dozen other instruments, and his hilarious and witty storytelling abilities. In 1983, he launched his own record label, Rising Son Records, which holds his complete catalogue, as well as works by his family and friends. Committed to social change, Guthrie and his family purchased the Old Trinity Church in Great Barrington, Mass. in 1991 – the location of the real life events that inspired the song/musical monologue “Alice’s Restaurant Massacree” – and it is now home to The Guthrie Center, a not-for-profit interfaith church dedicated to providing a wide range of local and international services. The Guthrie Foundation is a separate not-for-profit educational organization formed to address issues concerning the environment, health care, cultural preservation and educational exchange.