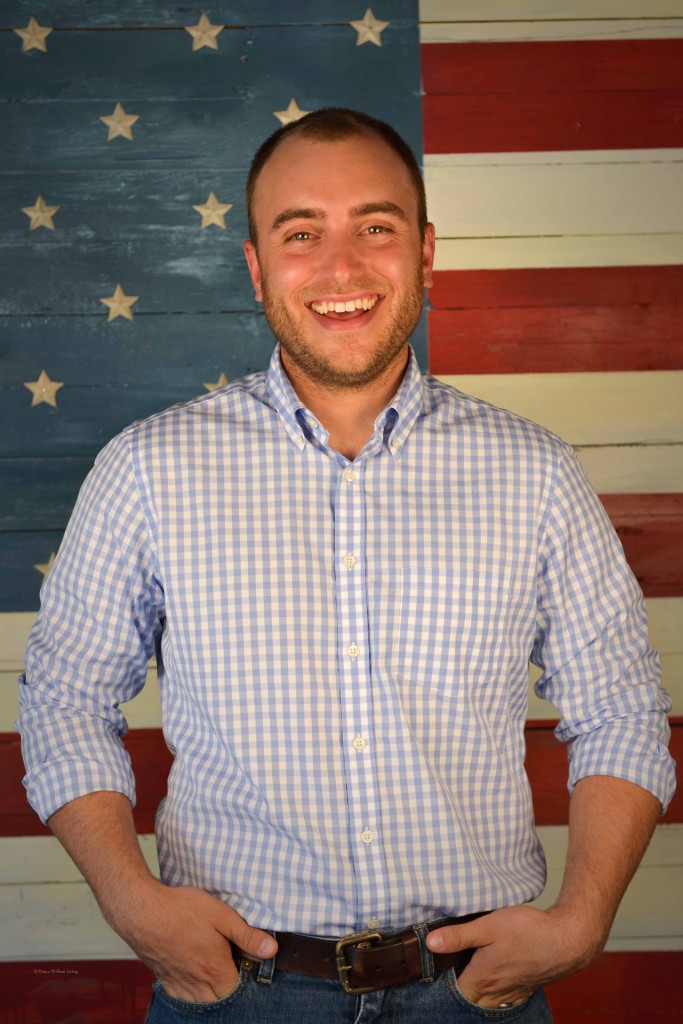 With its historical importance as the site of two major civil war battles, brothers Sean and Ryan Arroyo saw Manassas as a logical location for their company, the American history-themed Heritage Brewing. They opened the microbrewery last January, off of Center Point Lane near Old Town Manassas. There, the tasting room allows patrons to sip beer in the very room in which it is made.

The space is modern and industrial with a handmade sheet metal sign, but made comfortable and inviting with the hand built wooden bar and colorful chalk art on the walls. The bar wraps around a corner that conceals a large refrigerated room. When seated, your back is to the steam-powered boiler and the exposed brewing system customized to fit into the space.

Heritage is a U.S. military veteran-owned and -operated business that partners with the national Brewers Association to employ more veterans. The company’s two “brew guys” are both military veterans, as is the artist who does the chalk drawings. Sean Arroyo, CEO and co-founder, is a U.S. Marine Corps veteran, and cofounder Ryan is an active-duty Marine. “We bring the same level of dedication to brewing as we did to serving our country,” said Sean. “There is no compromising on the flavor and taste of everything we produce.”

Heritage’s beer is unfiltered and unpasteurized. Sean said this makes the beer last longer and that it harkens back to the early traditions of beer making. To obtain the best quality products, Heritage uses 92 percent local or organic ingredients; 100 percent of their ingredients are American-sourced, and 100 percent of the base malts are organic.

“Organic equals higher quality,” said Sean. “It is important to supply the highest quality ingredients because people literally consume them.” He touted Gunter’s honey from Berryville, Va., and Virginia grown ginger as examples of their local sourcing. “We wish there were more hop farms and grain producers in the state,” said Sean, but added that they also look outside of Virginia for premium ingredients.

Beyond wanting consumers to have the best possible products, the Arroyos want to be good corporate citizens. Heritage donates one percent of gross sales to various causes, primarily military organizations and local charities. Along with monetary donations, Heritage is also generous with its time and manpower. “Giving our time is important,” said Sean, “and it is important to give back to veterans having a difficult time.”

Recently, Heritage partnered with the building’s landlord to create a park nearby, with a goal of completion by year’s end. Additionally, Heritage worked with the National Museum of the Marine Corps in Triangle for a beer-themed dinner that Sean described as both a humbling experience and a dream come true. 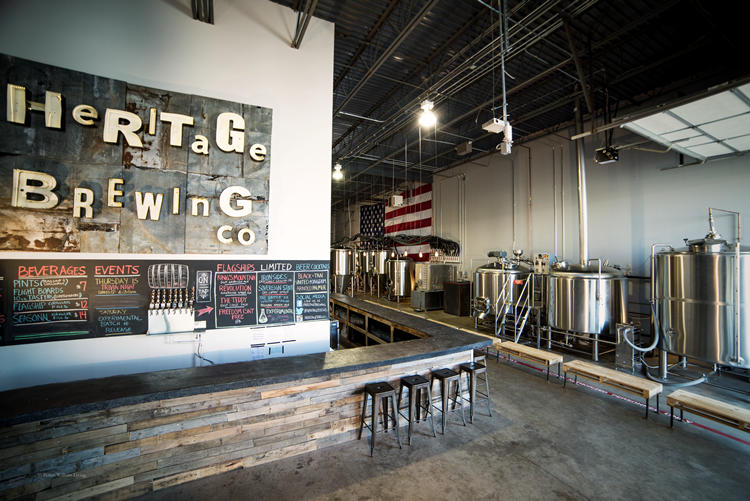 Heritage Brewing customers can sample beer in the room its brewed, and even tour the brewery to learn about the beer-making process.

Inspiration from the Past

Before launching the brewery, the brothers took a year of careful planning and raised more than $20,000 in funding through a Kickstarter campaign. According to Sean, the preparation involved finding a suitable site and making sure local interest was high. With its proximity to D.C. and the Blue Ridge Mountains and a strong American history connection, along with the community’s ongoing revitalization efforts, Manassas became their top choice. “Craft beer is exploding and expanding,” said Sean, “and Virginia is the next stopping point.”

“We started like most brewers: drinking beer,” he added. The brothers began as home brewers and became hooked. They learned about quality brews by experimenting, taking inspiration from successful microbreweries like Sierra Nevada, Bell’s and Dogfish Head.

While the Arroyos’ beer making style was influenced by established microbrewers, their product lines are inspired by a love of country. These modern-day patriots craft beers named after significant Americans and events, giving each a unique backstory. For example, the Kings Mountain “is named after an overwhelming patriot victory in the Revolutionary War fought between forces of both Scot-Patriots and Scot-loyalists,” states the wording on its bottle label. As Herbert Hoover once said of Kings Mountain, “This is a place of inspiring memories.” With its smooth malty taste, the Arroyos hope this is a beer to inspire memories as well.

Sean described the company and its affiliates as extremely patriotic and proud to be paying homage to American history. The brewery’s most popular offerings include Kings Mountain Scot-American Ale, Revolution American Amber Ale and Teddy (Roosevelt, that is) East Coast Pale Ale. They also make seasonal and limited releases, such as the Bradford Fall Seasonal, named for the pilgrim leader William Bradford, and the Battle of White Marsh Winter Seasonal.

Connor Smith, a sommelier and bartender at WineStyles in Montclair, said the Kings Mountain is “an absolutely phenomenal new take on an old world classic – this Scotch ale is rife with notes of toffee and caramel, perfect for brown and nut ale lovers everywhere.”

“Heritage is an amazingly approachable craft brew that will please both the seasoned beer connoisseur and the new craft beer lover,” said Kurt Hoffman, also a sommelier and bartender at WineStyles. Both sommeliers consider themselves beer lovers and enjoy the Heritage brews they have tried. “The fact that they are right here in my backyard of Prince William?” added Hoffman. “Just icing on the cake.”

As Prince William’s largest brewery, Heritage has expanded from draft-only to 750-milliliter bottles sold in stores like Total Wine. The Arroyos hope to have their products in local grocery stores by the end of the year. They will be selling twelve-ounce six-packs of select beers in the coming months as well. Visit heritagebrewing.com  to learn more about the company, along with tasting room and brewery tour hours and a list of what’s on tap.

Audrey Harman has been a resident of Prince William since 1988. She has a BA in English and Spanish from Hollins University and an MA in publications design from the University of Baltimore. She can be reached at aharman@princewilliamliving.com or you can view her portfolio at audreyharman.com.