Giving Back to the Community

In 2008, as Marie Louden spoke on the phone with a local nonproﬁt organization, she thought, “We have enough (ﬁnancial) resources here; why should you go to another county (for support)?”

It was after that conversation that Louden, Diane Riﬀer, Janice Mintz and Janan Turner set out to make a diﬀerence for the service sector of Prince William County, and the Giving Circle of Heritage Hunt was born.

Giving circles are a philanthropic form of shared giving and social investment networking. These circles combine ﬁnancial resources raised through membership and/or event fundraising and typically distribute pooled money through speciﬁc giving or granting vehicles. They take on a variety of forms, structures and focuses, and it is entirely up to the participating membership to decide the operation of their particular giving circle. This charitable vehicle gives a community or speciﬁc group of people the opportunity to follow a personal goal to give back or “pay it forward” much more signiﬁcantly than can a single donation. 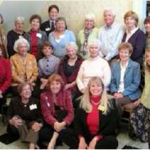 The Giving Circle of Heritage Hunt, in Gainesville, awarded six local community groups more than $7,500 in grants for 2010 at an award ceremony held on November 8.The organizations competed for the grants, and were voted on by the 20 members of the Giving Circle, who contribute a dollar a day and combine their moneys to help local community groups.
Photo courtesy Marie Louden

The Giving Circle of Heritage Hunt’s membership is made up of Heritage Hunt homeowners only due to the speciﬁc requirements of the residential community. However, the circle assists and encourages inquiries outside the community to consider forming their own charitable circles. They grant across the county, host supply drives for Prince William service organizations and participate in self-development activities connected to charitable cause.

Each April the Giving Circle of Heritage Hunt hosts a Soap & Paper Collection. Louden, who has a background in social work, explained that families cannot buy items such as soap or paper products with food stamps. With this knowledge, the circle collects these types of products from across the expansive Heritage Hunt community for one month and donates the entire cache to SERVE—a Manassas-based community organization providing shelter, a food distribution center, transitional housing, emergency assistance and life skills education for individuals and families in need—for use in their living facilities and distribution in the food closet.

The group has also created an internal book club at the encouragement of Riﬀer, a founding member of the Giving Circle of Heritage Hunt, and a former librarian, to further strengthen the resolve of their mission. Selected books tell of people who have made a diﬀerence in their communities, regions or globally. The members meet every other month to discuss their latest read. Most recently the book club has read Three Cups of Tea and Stones into Schools, both by avid mountain climber and humanitarian Greg Mortenson.

A few members of the circle devote time to area nonproﬁts as well. The Prince William Area Free Clinic has worked with four members of the Heritage Hunt Giving Circle.

A large focus of this charitable group is on the grant process and its recipients. Among other criteria, applicant organizations to the Giving Circle of Heritage Hunt must serve western Prince William County, have a budget less than $2 million, provide a speciﬁc project with measurable outcomes, and be secular in mission. There is no speciﬁc focus area for projects; all are welcome, and then voted on by the circle membership.

Grant amounts are dependent on membership contribution levels. The ﬁrst year the Giving Circle of Heritage Hunt was chartered, they gave two awards of $500 each; in their recent third cycle,

$7,500 was given to help advance the projects of six Prince William County nonproﬁt organizations. As Louden describes it, “We are interested in impacting organizations just outside our gates. This gives us a chance to learn what is happening in our community.”

The four founding members—Louden, Riﬀer, Mintz and Turner—make up the Guiding Circle. This circle administers the organization’s daily managerial needs of accounting, communications, application procedures, events and meeting planning. The membership is open to any Heritage Hunt resident interested and willing to commit to a pledge of $1 per day to the mission of the Giving Circle of Heritage Hunt. The circle has documented bylaws and an established schedule of meetings, events and campaigns, all for charitable purposes in Prince William County.

It’s been said that Americans are the most charitable people in the world. The Giving Circle of Heritage Hunt is a true example of the power of people to create positive outcomes within their communities. This great group of people in Gainesville really is making a diﬀerence in Prince William County by creating a legacy for the future.

If you would like more information on the Giving Circle of Heritage Hunt, contact Marie Louden at (703) 743-5122.

A nonproﬁt development director for 10 years, Jennifer Rader now works as a freelance writer and consultant. She lives with her son and husband in Manassas. She can be reached at [email protected]