Provided by National Museum of the Marine Corps 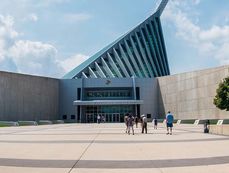 The National Museum of the Marine Corps hosts “Heroes Among Us,” an event for active duty military and veterans, highlighting resources available to these heroes while surrounded by the history they helped create.

On Saturday, Feb. 24, from 9:00 a. m. to 4:00 p. m., representatives from service organizations, both private and government, will help active duty and veterans navigate life both during and after their service. Overview tours of the galleries under development that will tell Marine Corps history from 1976 to 2015, as well as informative talks and demonstrations, will round out the day.

Visitors will get up close and personal with the howitzer that fired the first shot in Desert Storm, as well as the first tank to breech the berm into Kuwait, a HUMVEE that carried troops and supplies on humanitarian efforts in Haiti and an assault amphibious vehicle that will be used to explore the many climes and places where Marines serve. Staff and volunteers will take visitors onto the floor where the new galleries are starting to take shape.

Marine Corps History Division Historian Edward Nevgloski kicks off talks with a historical account and antidotes about Desert Storm on this 27th anniversary of the kick-off of the ground war. Other presentations relevant to military life include Lt. Gen. H. Stacy Clardy III, speaking about the “march to Baghdad” and a Marine Corps chaplain talking about the role and history of spiritual fitness in military service.

Yoga and service dog demonstrations round out the day’s offerings throughout the Museum.  This will also be one of your last opportunities to see “Honor, Courage, Commitment: Marine Corps Art, 1975-2015” in the Marine Corps Combat Art Gallery.  The show closes on March 1 in preparation for a show featuring WWI works from the Marine Corps and Navy art collections.  The new show opens in June.

For more information about “Heroes Among Us”, including a complete listing of the organizations attending, visit  usmcmuseum.com/heroes-among-us.html .