To give visitors insight into the life of William Skinker, who founded the Town of Haymarket in 1799, the Haymarket Museum re-created a typical 1825 Christmas dinner last December. Much like Skinker might have enjoyed during the holidays, museum staff laid a feast of baked Virginia ham, roasted grouse with stewed pears and cheese, carrots in butter sauce and French rolls on a white tablecloth with blue and white china, set around a centerpiece of oranges, apples and pine and holly leaves. There was even apple pie, a wedge of cheddar cheese and walnuts, a carafe of red wine and a foamy pitcher of cider. Although such a feast could have made Skinker’s mouth water, none of the food was real. It was all created by Heather Hembrey, owner of History’s Table, Faux Period Foods.

History’s Table evolved from Hembrey’s work at museums and from her love of history and food. She started her one-woman company more than four years ago in her Manassas home, where, in a room she shares with her rabbits and guinea pig, she creates lifelike replicas of period foods for exhibit in historic sites and museums nationwide. In addition to the Haymarket Museum, locally you can find her handiwork in displays at Rippon Lodge, Ben Lomond and other sites run by the Prince William County Historic Preservation Division. “I was on staff [at Historic Preservation]for about five years. I helped build a lot of the exhibitions for the historic houses they were opening, and faux food was part of some of those exhibitions,” she said.

Although most of her creations could grace 18th or 19th century tables, Hembrey can tackle food from any era. She has sent proposals to museums for displays that range from an 1830s German Easter dinner to an American 1930s home canning operation. Last year, she worked for the Kelsey Museum of Archaeology at the University of Michigan in Ann Arbor. “They had me replicate some foods for an exhibition they were doing on ancient Greece and how [that food]culture hadn’t changed since then,” Hembrey said. For that exhibit, she made olives, anchovies, onions and other foods still found at Greek dinner tables, and across the world, today. 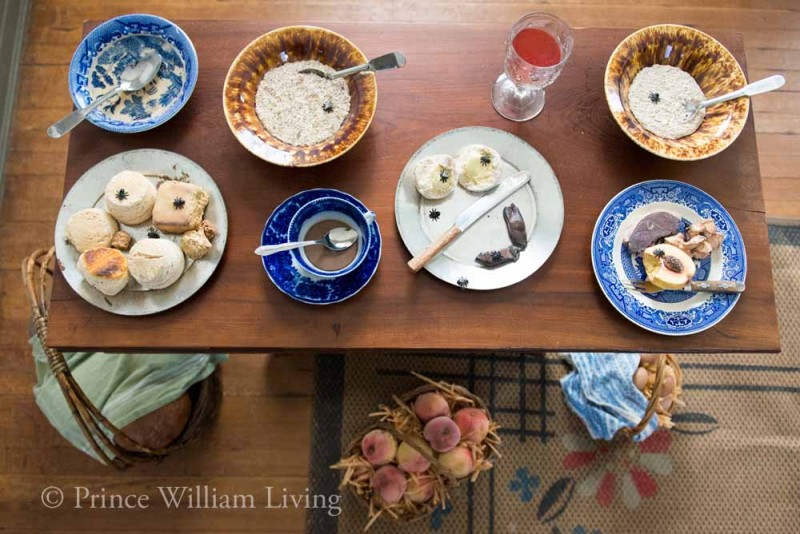 This display by Heather Hembrey, owner of History’s Table, Faux Period Foods—complete with period appropriate insects–was on display at Bristoe Station in Manassas.

Hembrey said her first concoction was a fruitcake she made for the Paul Revere House in Boston, where she worked in the late 1980s. The cake was needed for a display, and she was curious to see if she could create it. “I’ve been in the museum field since I was in high school so I’ve always been really fascinated by historical cooking—the ways that it’s done, the foods that were available,” she explained.

Hembrey makes her faux food out of materials such as resin, clay, plaster, rubber, sand and foam—Styrofoam and pillow foam. Wax, she said, is too volatile to use. “The objects that I make need to be stable so that they can be within a museum environment without off-gassing or attracting little creatures. Even some foods that used to be made out of paper mâché or even sandpaper can’t really be used anymore in places where there are lots of hungry little ones,” she said.

For a cake, she said foam makes a good base and there are a number of materials to stack on top of that to make a texture for a frosting. “Sometimes it’s just a matter of building layers, replicating what you do in clay and with paint to make it look as though it has layers and texture,” said Hembrey.

If it is more economical for a client, Hembrey will order pre-made fake food and then adjust or distress it to make it as appropriate. “I could not find very good pictures of the anchovies—their size, their scale—so I ended up ordering some [rubber]fishing bait anchovies and fixing them up so that they would look uniform and pretty. Fixing up is a loose term,” she laughed.

“I try very hard to make everything look nice but I also try to make it look realistic. A ham will look greasy. There might be a fly on something,” Hembrey said. For example, at Ben Lomond, which served as a hospital after the 1861 First Battle of Bull Run, museum staff decided that having flies on food would  depict the gruesome conditions during those hot July days. “It’s drawn a lot of comments,” she said.

With a background both as a museum specialist and archaeologist, Hembrey bases her creations on solid research. “Generally, I look at historic documents or books to see what foods were popular and what foods were available. Sometimes there are period images. For the Greek project, there were mosaics of some of the foods,” she explained. She also finds pictures of historic foods on the internet and has relied on cookbooks published by Mount Vernon, Monticello and Colonial Williamsburg, as well as reproductions of historical cookbooks such as The Virginia Housewife written by Mary Randolph, a relative of Thomas Jefferson, published in 1824. “She had a lot of recipes of what people were eating in the early 19th century. The diet was a lot more diverse than what we tend to think it is…She’s got recipes for curry, for okra, for tomatoes, any number of things that most people don’t even think were thought of in the 19th century but they were certainly around and quite popular,” Hembrey said.

Hembrey’s displays are also contextual. She considers the time period, the setting and the particular meal, season or holiday that is being represented, as well as the social standing of those being portrayed. “The foods for someone who is a middling class or not very wealthy would be different than someone with a high status,” Hembrey said.

Hembrey also incorporates period ceramics, dishes or glassware. “Until I went into archaeology, I didn’t really think much on dishes. Now I love them and try my best to incorporate that into the artificial food that I make,” she said.

Haymarket Museum Director Denise Hall said that Hembrey’s faux food in the holiday display enabled visitors to “paint a picture” of what a home would look like in 1825. “I was very impressed with her work, with the level of detail,” she said, also noting that the display had one of the museum’s highest visitor turnouts.

Hembrey believes that food exhibitions are a good way to draw visitors into museums. “We happen to be in the age of the foodie right now,” Hembrey said. “People love to see food. They like to look at a nice table and imagine they could eat it, I suppose.”

Carla Christiano is a native of Prince William County, admitted history geek and a technical writer for Unisys. She can be reached at cchristiano@princewilliamliving.com.

To see more photos from Heather’s exhibits please visit www.pwlphotos.com and look for the May 2015 issue album.