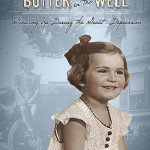 Growing Up During the Great Depression

When you’re moving from pillar to post, is home possible? The very word connotes peace, safety, comfort. But what is home? Is it your parents’ house, the one you go back to whenever you get a chance? The one you’ve bought with your spouse to rear your children in? A rented apartment? A series of houses or apartments?

For my parents, rearing a child in the ’30s and ’40s, home was a long series of houses, or portions thereof–twenty-one in as many years. They became adept at moving, and I, by necessity, adjusted to adjusting. Several times I actually went to the same school more than one year running, but not often. And no, my father was not in the military. They were just disrupted by events of the Great Depression and, like many of that era, stayed disrupted until wartime restored their bearings and they could finally buy their own two-bedroom, one-bathroom castle. However, it wasn’t long before my mother died, and then my father and I were on the go again.

Wasps in the Bedroom, Butter in the Well is a memoir of my childhood with parents on the lam, so to speak, not that we were being pursued but rather that my father was continually in pursuit of a better paying job than the one he had. Home for me was wherever my parents were, with their green sofa and the pictures my mother had chosen for the walls when their dreams were new. Wherever Daddy set up our beds was home. Even when we had no better option than a shabby, unpainted house in the depths of Greensville County, Virginia, with neither plumbing nor electricity, we were home. Amazingly, I never dreamed we were poor.

Recently reunited, through my book, with a friend from childhood, I learned this amazing fact: she had considered us rich. Why? I asked. Because your daddy had a car, she said, and you had all those toys. (Those toys would look so paltry to today’s child, but there were an indulgent and childless aunt and uncle who gave me nice things.)

My friend’s father, and our neighbors, all farmers, were “rich,” at least in land. We were like gypsies, with no house or land to hold us. But we loved one another and we had friends and relatives who lent our lives a certain continuity. Wherever we were, with our meager belongings, we were safe at home.

You can order this book from Amazon ($16.95 plus S&H) or from the author by emailing junekilpatrick@comcast.net.