There’s a new name in town in the restaurant business, and it’s already making a splash. Hot Chikn Kitchn, a quick-serve Nashville hot chicken style restaurant, opened on Nov. 15, 2020, in Woodbridge and has been enthusiastically welcomed by the community.

HCK occupies the space that used to be a Sweeto Burrito franchise. Franchise owner and HCK founder, Mike Sarago, closed the Sweeto Burrito on March 30, 2020, when the pandemic hit and put plans into motion for a Nashville hot style restaurant. That plan included far more than just opening a restaurant.

He then reached out to county supervisor Victor Angry. Angry put him in touch with Eric Williams who Sarago has known for years and worked with before on other ventures. Williams is a real estate broker by day and has a strong financial background.

“I reached out to Eric and told him of the idea. He jumped right on it, and he put together an ownership group,” said Sarago. That ownership group ended up including Williams himself, Chef Freddy Gilmore, Darrell Williams (Williams’ brother) and Lee Small.

A Passion for Small Business

Sarago has been self-employed for 27 years and has been in the restaurant business for the last eight. He has a passion for helping small businesses succeed. That has been part of the driving force behind HCK.

“I’m a big proponent of small business. My concern is we’re going to end up with Amazon, Target and Walmart, and on the food side, we’ll have three restaurant choices. I see the pandemic disproportionately smashing small business,” said Sarago.

Sarago and his son, Anthony Sarago, have a holding company that they will license out of. Sarago will use his company to help small business restaurant owners.

“We are a restaurant, but we want to be more than that to the community and whoever we can reach. That may be in the form of helping another small business whose concept might be old or tired. They may be in a franchise situation and that franchise is taking a huge amount of their income. We can lessen that
impact for them and give them a path forward,” he said. 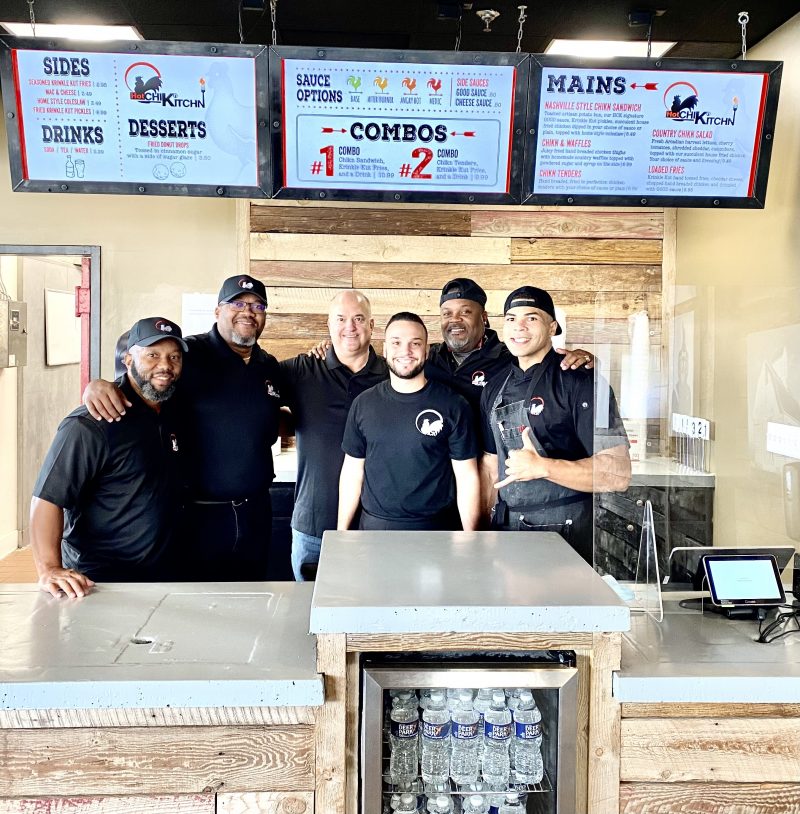 Another one of Sarago’s passions is giving opportunities to minorities in the community. Out of that passion was born the restaurant’s motto, Unity Through Food. You can see the slogan on a sign right as you walk in. Patrons love to take selfies in front of the sign.

Williams echoes Sarago’s passion.“We truly believe that when we open our doors every day that we’re going to be serving our community and promoting unity through food,” he said.

HCK’s food is Halal certified, making it the only place that the large Muslim population in the community can go locally to get fried chicken.

Unity through food is also born out of Sarago and Williams’ desire to bring the community together through socialization.

“We are a restaurant, but I think we’re more of a social gathering, a spot for folks where we can bring different ideas, different races together, and it’s a wonderful thing. The concept and the unity resonate through the community. We’ve been humbled by the support and overwhelmed by the attention
we’ve received so far,” said Sarago.

Chicken on the Menu

The chicken tenders at HCK are the most popular item on the menu. The tenders are huge! They can be dipped in one of their premium sauces or ordered plain. Two tenders add up to about 6 ounces of chicken.

The chicken sandwich is popular too. It comes with the “GOOD” sauce, pickles and slaw. If you are a fan of chicken and waffles, of course you can get that at HCK, too. They offer a delicious fried Country Chikn Salad as well. Additionally, they offer a variety of side items like crispy crinkle cut fries, slaw, mac and cheese, and fried pickles. For your sweet tooth, they have donut drops with a side of sweet glaze for dipping. Everything at HCK is prepared in house, hot and fresh. “The chicken is made to order,” said Sarago.

One thing that distinguishes HCK from other restaurants in the area is their premium, pepper-infused sauces with escalating heat levels. Sarago and Williams visited several traditional Nashville hot chicken style restaurants. They found that the chicken had a lot of heat from the traditional pepper rub but lacked flavor, so they set out to make a flavorful sauce.

Sarago developed a flavorful sauce and infused peppers for varying levels of heat. First is the Base Sauce made with chili pepper. The second level is called Afterburner made with habanero pepper. The third level is called Angry Hot, named after Supervisor Angry and made with scorpion pepper, and finally, there is the Medic, the hottest sauce, made with Carolina Reaper pepper.

If spicy is not your thing, have no fear. You can get anything on the HCK menu plain.

“We don’t want to be pigeon-holed into only hot (spicy) options because it starts with a succulent, hand breaded piece of chicken that anyone can enjoy with or without sauce. We want this to be a gathering place for all,” said Sarago.

Williams said that HCK is really just a variation on Nashville hot chicken which, according to Sarago, is big on the west coast and is slowly migrating east.

“Because we’re not hot just for the sake of being hot and we have a flavorful, infused pepper sauce, we hope to move toward the Prince William style hot that gives a little more local flavor because it’s a spinoff of Nashville hot, but what we’ve done is truly unique and original,” Williams said.

Adapting to the Pandemic

HCK offers third-party delivery and soon to come, curbside pickup. There are QR codes on the inside and outside of the restaurant that you can scan, then place your order online, pay and pick it up at the restaurant. To place an order for pickup or delivery, go to hotchiknkitchn.com. They are also working on
contactless delivery in anticipation of another shutdown due to the pandemic. HCK has catering, as well.

Amy Falkfoske is a freelance writer and photographer. She has a Master’s degree in Film-TV with a concentration in screenwriting. She lives in Bristow with her husband, two boys and two Beagle dogs.