Provided by House of Mercy 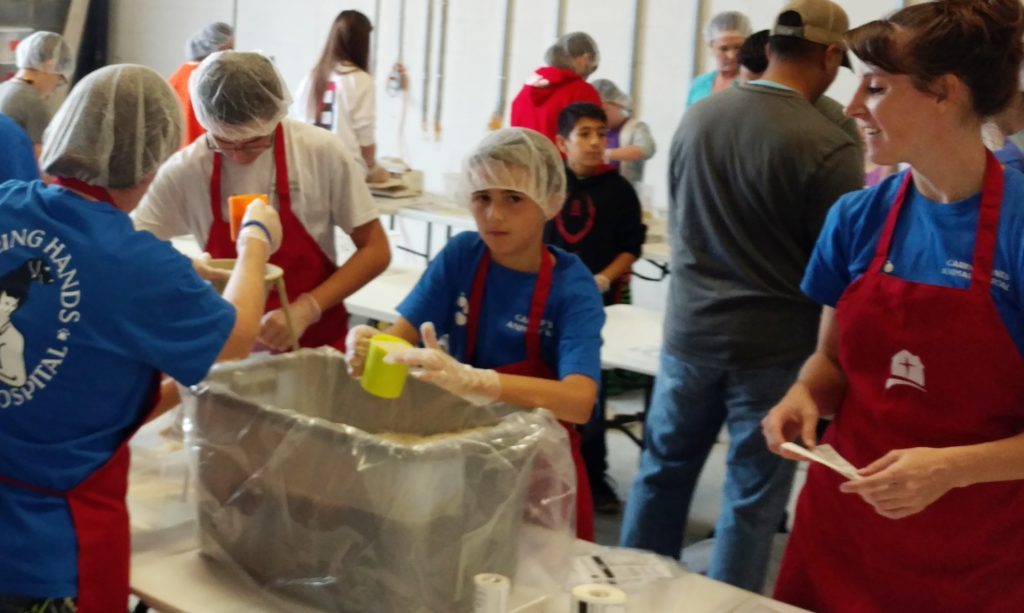 The 2016 Campaign to End Hunger to benefit the House of Mercy brought in 227 volunteers on Saturday, October 1, 2016 to pack beans and rice. Caring Hands Animal Hospital in Bristow is shown packing with their friends and family.

The House of Mercy’s (HOM) sixth annual “Campaign to End Hunger” meal-packing event to feed the poor and malnourished occurred on Saturday, Oct. 1, 2016. Beneficiaries of the food this year are the St. Lucy Project of the Diocese of Arlington, and the Capital Area Food Bank.

“As anticipated, this event celebrated the huge potential of people who work together to make a significant contribution to the poor in the northern half of the Commonwealth,” said Felice Hilton, Assistant Director of House of Mercy.

The campaign goal was for volunteers to pack 40,000 meals, HOM’s Executive Director Ann Cimini said. “We screamed right by that goal this year, by almost 32,000 meals. Just an incredible effort this year, for the malnourished in our midst.”

The Campaign to End Hunger is the major fund raising activity each year for the House of Mercy. The fee to participate in a two hour work shift is just $20. The fee covered the cost of food ingredients for the meals, supplies and shipping, as well as contributing to House of Mercy support and education programs, Hilton said. “Eighty six cents of each donation dollar House of Mercy receives goes back into our programs to support and serve the poor,” she continued.

The next big event for House of Mercy is the “Christmas with Mercy” event on Saturday December 10. Gift donations valued at $25 are currently being accepted at House of Mercy.

For more information about the House of Mercy, its Programs, or Campaign to End Hunger, email [email protected] or call 703-659-1636.