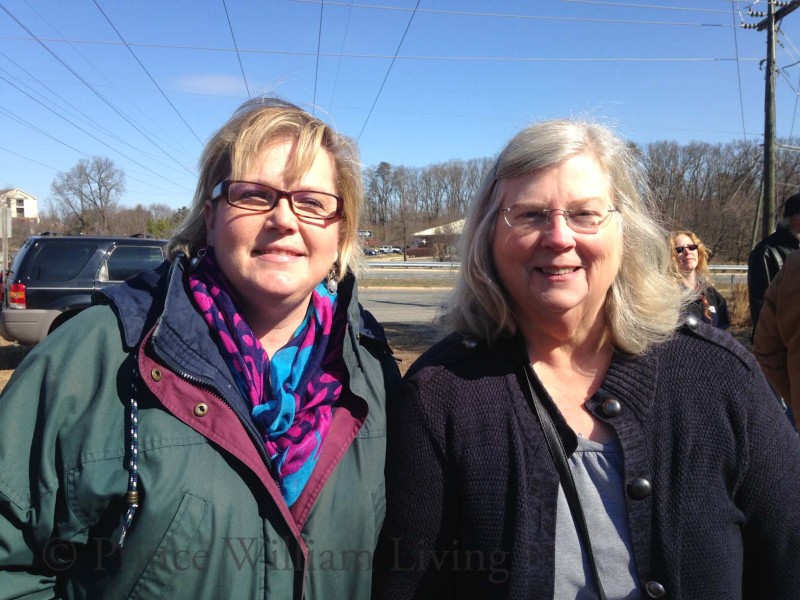 Anne Marie Landry and Terry Twomey started working with the homeless through another group before forming Woodbridge HUGS.

Every Saturday at 11 a.m., Annmarie Landry and her team of dedicated volunteers show up on the patch of grass beside Caton’s Auto Repair Shop to serve meals. The homeless that soon join them come from the other side of Bungalow Ale House where you can find a large city of tents in the woods. On wintery days Landry will pick some of them up in her car to spare them the walk to Caton’s. Everyone knows Landry by name, but more importantly, they know her by the way her arms wrap around them, the universal way of greeting someone you care immensely about. Landry is one of the directors of the charity Woodbridge HUGS (Help Us Grow Strong). The organization provides basic needs to the homeless living in Prince William County and is raising money for tiny houses.

On this particular day, the air is crisp and cold. That hasn’t stopped the crowd from turning up. “Lately, it’s been like Christmas,” Landry said of the turnout. On one table there’s hot baked ziti and banana pudding. Landry said that a hot meal is something that is important to their group.

“The main part of our outreach is giving them hot meals and positive social interaction,” Landry said. However, HUGS’ goals for the future are bigger than this.

Terry Twomey, founder of Woodbridge HUGS, is animated about their plans for tiny houses. Both Twomey and Landry started working with the homeless through another group, Woodbridge Homeless Outreach, which provides propane tanks and water to the homeless. They branched off from them because they felt they could do even more.

“It was a Band-Aid on the problem,” Twomey said. She said that the organization’s new goal of providing the homeless with a safe place to live could help them get their feet back on the ground: “It gives them that recovery time. They will be in a better place for that transition.”

The transition that she refers to is working on possible alcohol or drug abuse problems. “After three to six months of having their own safe space— safe being the key word here—they’re the ones asking to take the next step,” Landry said.

In some cases Landry said it’s simply a matter of transitioning back to living in a house: “You have to learn how to be homeless, so to be stable, the reverse, you have to relearn that.” She said that this is why rapid housing works for people who have just become homeless but not for people who have lived in the woods or a long time. Part of HUGS’ goal is to reestablish stability in their lives.

“We have to establish trust. They have to know we have their best interests at heart,” Landry said. “Our main goal for them is to become the best version of themselves.” Both she and Twomey believe that this is possible through tiny houses. Landry said, “They’re fast, they’re cheap, and they’re efficient. Until they have a better option, this is best, and it beats being on the ground.”

It’s also, she said, the most cost-effective way to deal with the problem. Tiny houses cost between $10,000 and $15,000 to build, but rather than a constant monthly rent, this is a onetime fee. The biggest concern will be where to lease the land for the houses. With only 408 homeless living in Prince William County, according to the “Homelessness in Metropolitan Washington: 2015 Report,” Twomey and Landry argue that it’s not only important to house everyone in need, but something that is very doable.

Our Friends in the Woods

This is what struck Landry when she first began working on the issue 18 months ago. “When I saw there were homeless people living in the tents in my own county, I just felt that was wrong,” Landry said. “I’m a doer not a sayer, and I wanted to do something about it.” 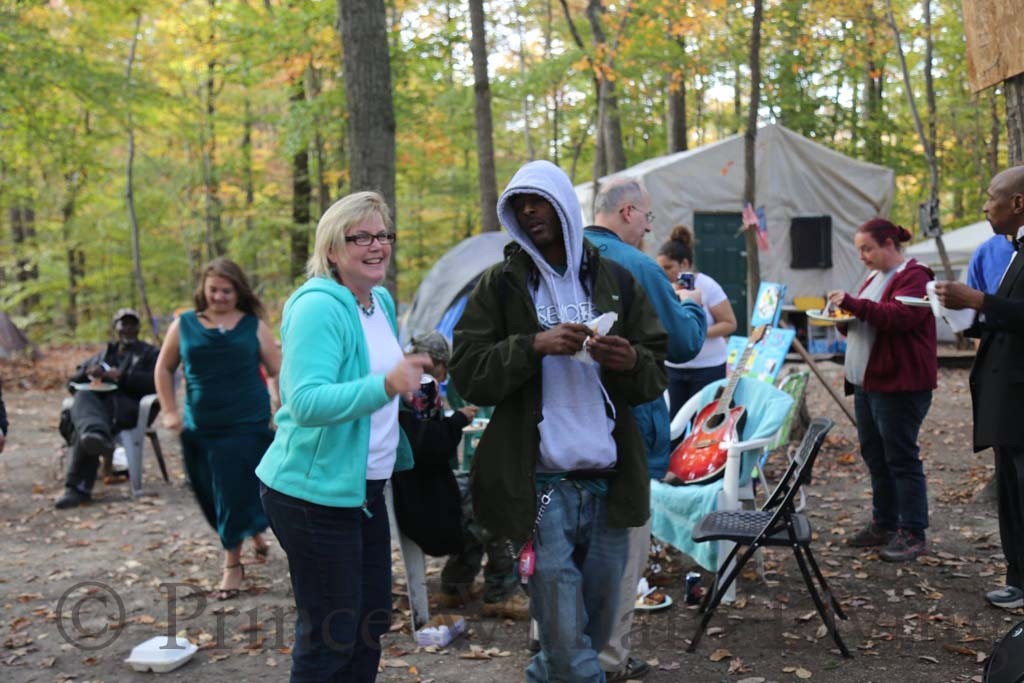 Anne Marie spends time getting to know her friends in the woods.

“We don’t call them homeless; we call them our friends in the woods,” Landry said. “They’re a group that is often forgotten or overlooked, so I hug them all the time. I want them to feel like they’re people. We treat them with dignity and respect. We don’t want them to feel different from anyone else. ”

According to Twomey, this is a problem that plagues the homeless community: “There’s a culture bias that has developed through generations about what homelessness really is. For example, it’s very hard for them to get jobs.”

With an overall 3.9 percent unemployment rate in Prince William County according to the Virginia Employment Commission, many of the people looking for jobs are not homeless, which means that the people living in the woods have to compete with freshly groomed, recently graduated college students. But even these students are included in Twomey and Landry’s goals for the tiny houses. Not every recent high school or college grad necessarily has a place to live or an immediate job, so these tiny houses can belong to them as well, with the only stipulation being to keep the houses well-maintained.

To raise money for the tiny houses, Woodbridge HUGS held its first ever HUGS/Tiny House Gala on Saturday, April 30th at Sacred Heart Catholic Church in Manassas. To contribute to the cause, you can join Woodbridge HUGS every Saturday morning at 11:00 a. m., on the patch of grass near Caton’s Auto Repair Shop. For more information on how to help, contact WoodbridgeHUGS@gmail.com or call 703-895-0044.

Jessica Geraci (jgeraci@princewilliamliving.com) is a freelance writer and marketer. She recently served two years in the Peace Corps in Vanuatu, where she blogged about the people, the cultural differences, and her efforts to empower young women in the community.