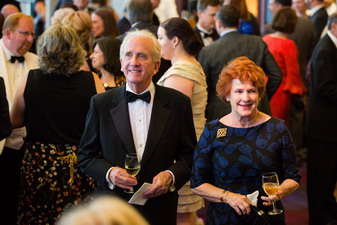 The Hylton Center’s 8th Anniversary Gala was held on the evening of Saturday, April 14, 2018 at the Hylton Performing Arts Center in Manassas. The evening opened with a warm welcome by Rick Davis, Executive Director of the Hylton Center and Dean of George Mason University’s College of Visual and Performing Arts, which was followed by a special presentation on behalf of the U.S. Congress by Congressman Gerry Connolly in honor of Julie and Buck Waters.

After dinner (sponsored by Compton & Duling, L.C.), Rick Davis returned to thank the guests in attendance and remark on the progress being made on the growth of the Hylton Center. George Mason University’s President Dr. Ángel Cabrera also gave remarks, recognizing the advancement being done on the Science and Technology Campus of George Mason University and the importance of the Hylton Center to the campus, the university, and the community. Julie and Buck Waters were then presented with their award by Eileen Kennedy, Director of Development at the Hylton Center. 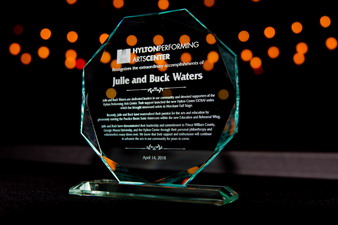 The Gala featured a live auction. The auctioneer then led a “Raise Your Paddle” to raise funds for the Veterans and the Arts Initiative. Guests joined an After Party, sponsored by KO Distilling, which included craft cocktails, sweet and savory bites, music and dancing with local band Keynote, and a jazz lounge with Mason Music’s Darden Purcell. Guests bid on pieces in the Gala’s first Silent Art Auction, which featured 25 pieces of art from local and regional artists, including George Mason University alumni.