MANASSAS, Va., Feb. 5, 2013 – Renowned visual artist and mime Michael Cooper brings his enchanting one-man show, “Masked Marvels & Wondertales,” to the Hylton Performing Arts Center in Manassas on Sunday, March 3, 2013 at 4 p.m. The performance is part of the second year of the popular Hylton Family Series, which encourages parents and children to enjoy and experience the arts together. 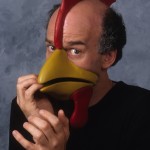 For almost 30 years, Cooper has been entertaining audiences of all ages with thrilling performances that combine dazzling hand-crafted masks, original stories of courage and wonder, stilt dancing and physical comedy. Cooper’s newest imagining, “Masked Marvels & Wondertales,” reveals wildly wacky tales based on his own experiences growing up in the woods of northern Maine where, he says, “Home is an adventure and the stories write themselves.” The colorful cast of characters – all played by Cooper – features dogs wearing costumes, wild stallions being tamed, giant noses sneezing and much more. This magical performance is filled with exciting adventures, funny antics and fantastical possibilities.

Cooper obtained a degree in Peace Studies from Goddard College, an education that continues to drive his desire to create works that entertain his audiences’ imaginations while appealing to their sense of humanity. He completed six years of theater training with Etienne Decroux and Tony Montanaro, two of the world’s greatest contemporary mime artists. During that time he also mastered the art of mask-making and he now makes all of the extravagant masks used throughout his performances, some of which take up to 300 hours to complete. He has traveled the world performing his unique style of mime, presenting at such venues as the Brooklyn Academy of Music, the Hong Kong International Children’s Festival, the Dublin Theater Festival and the Eugene O’Neill Theater.

The 2012-2013 Hylton Family Series concludes with Mutual of Omaha’s “Wild Kingdom” starring Peter Gros on Sunday, April 21, 2013 at 2 p.m. and 4 p.m. Please visit HyltonCenter.org/family for information about this and other performances at the Hylton Performing Arts Center.

Tickets for MICHAEL COOPER’S “MASKED MARVELS & WONDERTALES” are $5 for children and $15 for adults. Visit the box office (open Tuesday-Saturday 10 a.m. to 6 p.m., Thursday 10 a.m. to 8 p.m.) or charge by phone at 888-945-2468 or visit HyltonCenter.org. The Hylton Performing Arts Center is located on George Mason University’s Prince William Campus at 10960 George Mason Circle, Manassas, Va., 20110. FREE parking is available in the lot next to the Hylton Center. For more information, please visit HyltonCenter.org. Like us on Facebook at Facebook.com/HyltonCenter and follow us on Twitter at @Hylton_PAC.