“This new chamber series has everything I love gathered in one place—good food, great music, an intimate venue and the chance to mingle socially with the artists. And the weekday afternoon timing is perfect for a lot of folks,” said Hylton Center Executive Director Rick Davis. “I think it will be enormously popular.” 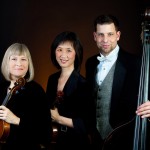 Matinee Idylls kicks off on Tuesday, Feb. 19, 2013 at 12:30 p.m. with a buffet luncheon from Carmello’s, one of the fine dining restaurants in Old Town Manassas, followed by a one-hour concert by OperaBelle, a “soaring” trio of professional operatic sopranos, featuring Prince William’s own musical treasure, soprano Angela Knight, as well as soprano Katherine Keem and mezzo-soprano Anna Korsakova, in a program of thrilling arias, duets and ensembles. All three singers have performed with the Washington National Opera and Washington Concert Opera, and have had extensive solo concert careers. 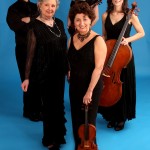 The series continues on Tuesday, March 26, 2013 at 12:30 p.m. with lunch and then a performance by QuinTango. This critically acclaimed quintet of two violins, cello, bass and piano is dedicated to the musical performance of the sizzling art of tango. QuinTango was founded in 1995, and has been invited to perform at the White House, the Kennedy Center’s Millennium Stage and the Piccolo Spoleto Festival in Charleston, S.C., among others. The WAMMIE Award-winning ensemble also presents music education programs through the Washington Performing Arts Society.

The inaugural Matinee Idylls series concludes on Tuesday, May 21, 2013 at 12:30 p.m. with lunch and a performance by The Virginia Virtuosi, featuring three outstanding chamber musicians on violin, viola and bass who make the classics come to life. This performance, titled “Casual Classics,” features ensemble member Mark Bergman’s moving and elegant portrait of our nearby national park in “Shenandoah Suite.” The ensemble has performed throughout the greater Washington, D.C. area, including at the Corcoran Gallery of Art, the National Gallery of Art and the Kennedy Center, among others. The Virginia Virtuosi has also partnered with the Virginia Commission on the Arts on music education programming for youth and adults in the region.