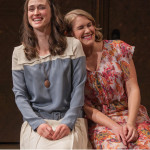 MANASSAS, Va., April 1, 2013 – Critically acclaimed theater troupe The Acting Company, in association with The Guthrie Theatre, brings Shakespeare’s “As You Like It” to the Hylton Performing Arts Center in Manassas on Saturday, April 27, 2013 at 8 p.m. The New York Times calls The Acting Company’s production, “a sweet and sophisticated staging for all ages.” A pre-performance discussion, free to ticket holders, begins 45 minutes prior to the performance in the Hylton Center’s Buchanan Partners Art Gallery. Prince William Health System is the 2012-2013 Hylton Presents Season Sponsor.

“All the world’s a stage,” according to this play about forced exile, mistaken identities and romantic love. Widely regarded as one of Shakespeare’s greatest comedies, “As You Like It” tells the tale of Rosalind, the daughter of usurped and exiled Duke Senior, and Orlando, the younger brother of the cruel Oliver. When Rosalind and Orlando meet, it is love at first sight, but before they can reveal their true feelings, they are forced to separate as they flee from power-hungry relatives at court. When Rosalind, masquerading as a man for her own safety, encounters Orlando in the forest of Arden, chaos ensues and the couple find themselves entangled in a comical web of unrequited love, passionate lust, elaborate disguises and mistaken identity. Through all the sidesplitting laughter, the Bard weaves in witty commentary that takes audiences on a profound journey of love and self-discovery.

Founded in 1972 by the late John Houseman and Producing Director Margot Harley, The Acting Company is one of America’s leading touring repertory theaters. It has launched the careers of some of today’s finest actors, including Kevin Kline, Patti LuPone, Rainn Wilson, Jeffrey Wright, Frances Conroy and Jesse L. Martin, among many others. Throughout the years, The Acting Company has performed more than 135 productions for more than three million people across the globe. Many of these performances are part of the company’s education program, which promotes theater and literacy in communities that lack live performance venues and theater arts education. Its work has earned the company numerous awards, including Obies, Audelcos, Los Angeles Critics Circle Awards and a Tony Award for Excellence in Theater.

Sir Tyrone Guthrie founded the Guthrie Theatre in 1963. This center for theater performance, production, education and professional training has since become one of the country’s top regional theaters. The Guthrie Theatre has received several prestigious awards, most notably a 1982 Tony Award acknowledging its outstanding contribution to the American theater.

PLEASE NOTE: The Acting Company will present a stage adaptation of John Steinbeck’s literary masterpiece “Of Mice and Men” at George Mason University’s Center for the Arts in Fairfax on Sunday, April 28, 2013 at 4 p.m. Please visit cfa.gmu.edu for more information about this performance at the Center for the Arts.