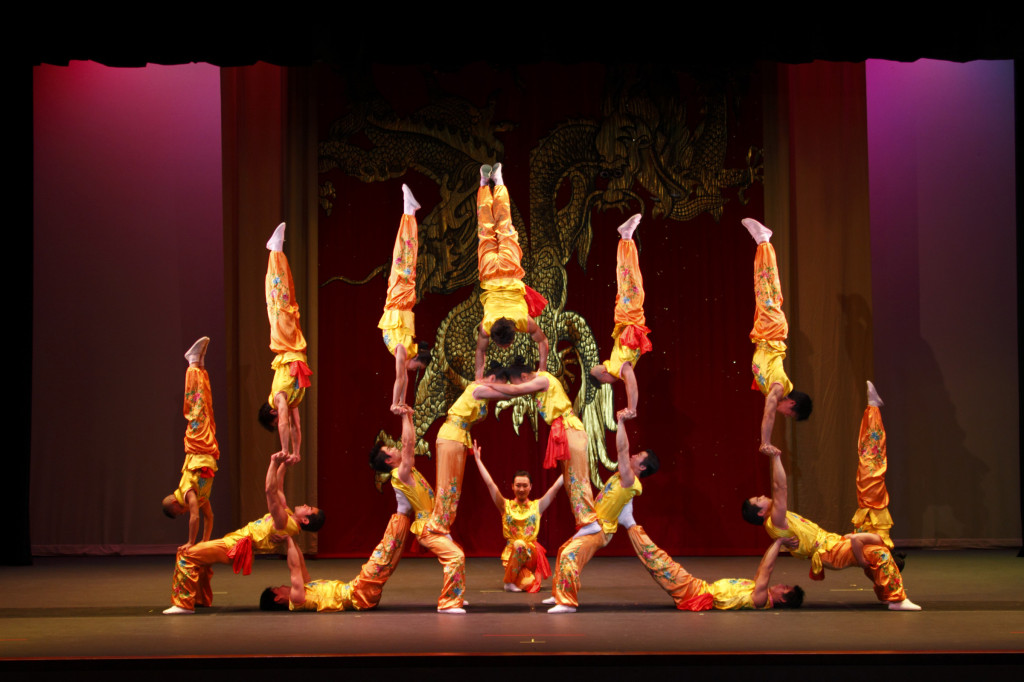 MANASSAS, Va., Jan. 30, 2013 – “The Peking Acrobats [are]pushing the envelope of human possibility … pure artistry!” raves The New York Post about these gifted Chinese artists who appear for the first time at the Hylton Performing Arts Center in Manassas on Wednesday, Feb. 26, 2014 at 7:30 p.m. Boasting appearances that include NBC’s New Year’s Holiday Special, a television special with Ellen DeGeneres and the hit film, “Ocean’s 11,” The Peking Acrobats have also collaborated with prestigious symphony orchestras across the United States. Now, the ensemble showcases this ancient art form with acts including juggling, tumbling, magic and more, which are as fresh and awe-inspiring to today’s audiences as they were thousands of years ago. A pre-performance discussion, free to ticketholders, begins 45 minutes prior to the performance in the Hylton Center’s Buchanan Partners Art Gallery. Novant Health is the 2013-2014 Hylton Presents Season Sponsor.

The ancient art of Chinese acrobatics dates back as early as the Ch’in Dynasty (221 B.C.-207 B.C.). According to Fu Quifeng, author of “Chinese Acrobatics Through the Ages,” acrobatics originated from daily life, drawing from people’s experiences in work, war and sacrificial rites; the art form became widespread during the Han Dynasty (207 B.C.-220 A.D.) when the juggling, tumbling and magic acts became known as the “Hundred Entertainments.” Emperor Wu Di of the Han Dynasty presented the first grand acrobatic performance at the Imperial Court, which marked the first time in Chinese history that the art form was presented for diplomatic purposes. Today, numerous acrobatic troupes across China have worked to preserve this unique art form and help it reach new audiences.

“Amazing … stunning … breathtaking … and WOW!” said the Seattle Times about The Peking Acrobats, who have brought their spellbinding performances and breathtaking feats to audiences across the globe. The ensemble has appeared on “The Wayne Brady Show,” NBC’s “Ring in the New Year” Holiday Special, Nickelodeon’s “Unfabulous,” “Ellen’s Really Big Show” hosted by Ellen DeGeneres and “Guinness Book Primetime,” in which they set the world record for the Human Chair Stack, where they balanced six people precariously atop six chairs 21 feet above the ground. Members of The Peking Acrobats also appeared in Steven Soderburgh’s blockbuster film “Ocean’s 11” starring George Clooney, Brad Pitt and Matt Damon, while alumnus Qin Shaobo also appeared in its sequels, “Ocean’s 12” and “Ocean’s 13”; the company also performed at the Hollywood premiere of “Ocean’s 13” in 2007. In addition to an appearance at the Hollywood Bowl with the Hollywood Bowl Orchestra under the baton of John Mauceri (in which The Peking Acrobats’ musicians played traditional Chinese instruments), the ensemble has performed with some of North America’s most distinguished symphony orchestras, including the Atlanta Symphony Orchestra, Ravinia Festival Orchestra, San Diego Symphony Orchestra, Cincinnati Pops Orchestra, Buffalo Philharmonic Orchestra, San Francisco Symphony Orchestra, Edmonton Symphony Orchestra and Winnipeg Symphony Orchestra.

Tickets for THE PEKING ACROBATS are $48, $40 and $32. Family Friendly: performance is suitable for families with children. Youth Discount: tickets are half price for youth through grade 12. Visit the box office (open Tuesday through Saturday, 10 a.m. to 6 p.m. and Thursday, 10 a.m. to 8 p.m.) or charge by phone at 888-945-2468 or visitHyltonCenter.org. The Hylton Performing Arts Center is located on George Mason University’s Prince William Campus at 10960 George Mason Circle, Manassas, Va., 20110. Free parking is available in the lot next to the Hylton Center. For more information, please visit HyltonCenter.org. Like us on Facebook atFacebook.com/HyltonCenter and follow us on Twitter at @Hylton_PAC.