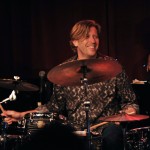 MANASSAS, Va., Dec. 11, 2012 – For one night only, Merchant Hall transforms into Birdland Jazz Club, New York’s great mecca for jazz, as this dynamic new ensemble creates an unforgettable musical event. “Live at Birdland” appears at the Hylton Performing Arts Center in Manassas for the first time on Friday, Jan. 25, 2013 at 8 p.m. This performance is Family Friendly: tickets for youth grades 12 and under are half price when accompanied by an adult. A pre-performance discussion, free to ticket holders, begins 45 minutes prior to the performance in the Hylton Center’s Buchanan Partners Art Gallery. Prince William Hospital is the 2012-2013 Hylton Presents Season Sponsor.

In this spectacular evening of music, virtuoso drummer Tommy Igoe leads The Birdland Big Band in an exciting and surprising performance that showcases the best of American jazz along with jazz from every corner of the globe. The program will feature hits by Herbie Hancock, Duke Ellington, Chick Corea, Bob Florence, Paquito D’Rivera, Joe Zawinul, Antônio Carlos Jobim, Leonard Bernstein and many others. 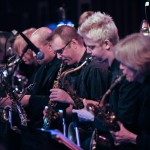 The original Birdland Jazz Club opened in New York City in 1949 and remained opened until 1965, attracting such legends as Art Blakely and John Coltrane, who both recorded live albums at the Birdland; Dizzy Gillespie; Thelonius Monk; Miles Davis; Stan Getz; and many others. Among the celebrities who were Birdland regulars were Frank Sinatra, Ava Gardner, Gary Cooper, Marilyn Monroe, Sugar Ray Robinson and Judy Garland. The revival of the club opened in 1986 and has been at its current location in Midtown Manhattan since 1997.

The Birdland Big Band was founded by celebrated drummer and bandleader Tommy Igoe (Blood, Sweat and Tears) in 2006, and plays sold-out shows every week at the Birdland Jazz Club. The 15-member band’s most recent recording, “Eleven,” has received praise from audiences and critics alike.

Tickets for LIVE AT BIRDLAND are $28, $36 and $44. Family Friendly: youth through grade 12 half price when accompanied by an adult. Visit the box office (open Tuesday-Saturday 10 a.m. to 6 p.m., Thursday 10 a.m. to 8 p.m.) or charge by phone at 888-945-2468 or visit HyltonCenter.org. The Hylton Performing Arts Center is located on George Mason University’s Prince William Campus at 10960 George Mason Circle, Manassas, Va., 20110. FREE parking is available in the lot next to the Hylton Center. For more information, please visit HyltonCenter.org. Like us on Facebook at Facebook.com/HyltonCenter and follow us on Twitter at @Hylton_PAC.