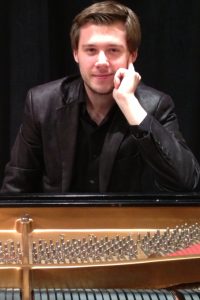 Dr. Cornet is establishing a reputation as an emerging artist with a penchant for expressive playing and tour-de-force virtuosity. He is a prize winner in many nationally and internationally recognized piano competitions and recently made his Carnegie Hall debut as a First Prize Winner in the Bradshaw & Buono International Piano Competition. He returned to New York City to perform at the Dicapo Opera Theatre Concert Hall, Merkin Concert Hall at the Kaufman Center, and the Bruno Walter Auditorium at Lincoln Center.

As a solo artist, Anthony has been dedicated to merging his artistic ambitions with humanitarian efforts. He has been able to raise thousands of dollars for many reputable charities through his own concert series, A Special Evening with Pianist Anthony Michael Cornet. He has supported organizations that include Big Brothers Big Sisters, the Miracle League, and the Shropshire Music Foundation. The series has received high acclaim and has established Anthony as a dynamic and engaging recitalist.

The MSO concert program also includes Ludwig van Beethoven’s blissful Symphony No. 7 in A Major, previously performed by the MSO way back in 2003, as well as Ralph Vaughan Williams’ beautiful 1910 masterwork for double string orchestra, Fantasia on a Theme by Thomas Tallis.  As a special treat, the MSO Winds will present a free pre-concert performance in the Buchanan Partners Art Gallery of Serenade for Winds in D minor, Op. 44 by Antonín Dvořák.  This performance begins at 6:55 p. m.

Season subscriptions and individual concert tickets are available from the Hylton Center Box Office or by calling 888-945-2468. All children and student tickets (through college) are free.

Founded in 1992, the Manassas Symphony is the winner of the 2015 American Prize for Orchestral Performance, Community Division and is a Resident Arts Partner of the Hylton Performing Arts Center in Manassas. The all-volunteer orchestra plays five concerts a year and is involved with many educational and civic events throughout the community. For more information on the Manassas Symphony, visit its website at ManassasSymphony.org.