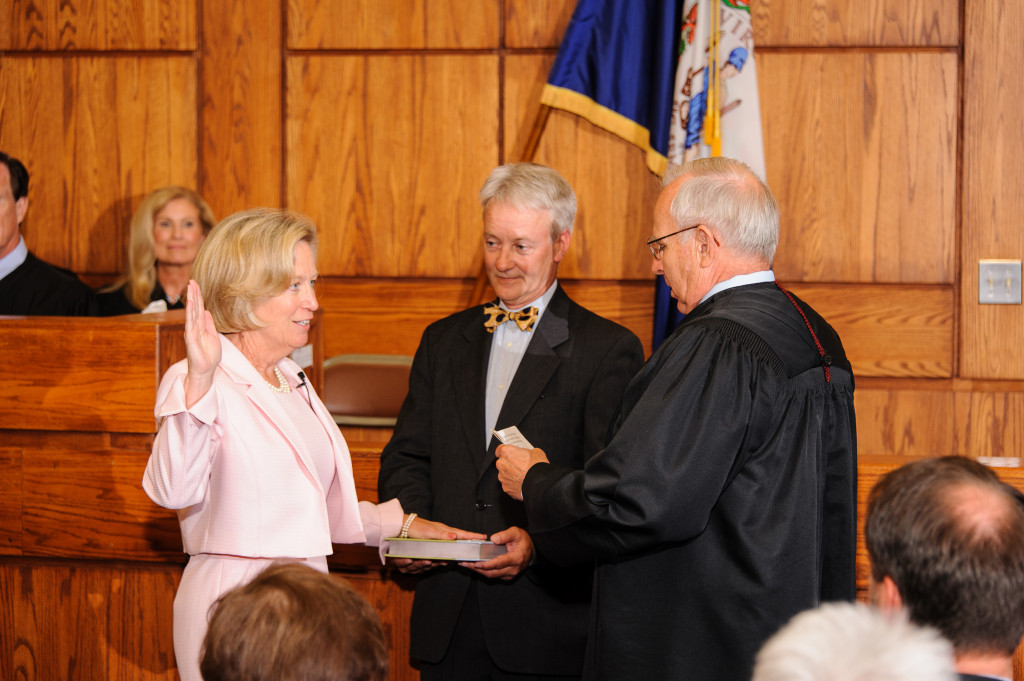 Judge O’Brien attended Le Moyne College in Syracuse, where she graduated with a degree in English, with honors. She received her Juris Doctorate from Washington and Lee Law School in 1983. While in her third year at W &L, she was one of eight students to be named a Burks Scholar, a distinction that carries with it the responsibility of mentoring first year law students in legal writing. She clerked for the Honorable Roscoe B. Stephenson, Jr., of the Supreme Court of Virginia for two years. Then Prince William County Commonwealth’s Attorney Paul Ebert hired her in 1985. In 2001, she was elevated to the Juvenile and Domestic Relations District Court for PWC, and in 2008, she was elevated to be the first female Circuit Court Judge in the 31st Judicial Circuit.

In his introductory remarks, Allen Newcomb, Esq., noted that he and O’Brien started practicing law at about the same time. He described her “classmates” in the CA’s office as an exceptionally talented group, including Justice Millette, the Honorable William D. Hamblen, James A. Willett, & Richard Conway. As Newcomb reflected on their friendship over the past 30 years, he said, “I’ve had the good fortune to see her as a wife, a mother, a lawyer, and a judge. And the one thing that as a constant, has impressed me, is that she carries about her, an inner-confidence that allowed her to always lead off each encounter that she has, respecting those around her.” Since 1985, through witness interviews, trial preparations, motions to compel, objections, and rulings, “she has consistently lead with respect… regardless of a person’s station, education, or status.”

Delegate Jackson H. Miller presented the Commission to the Honorable Glen Huff, Chief Judge of the Court of Appeals of Virginia. Miller recounted working with then Assistant Commonwealth’s Attorney Mary Grace O’Brien, saying she was one of law enforcement’s favorite prosecutors. He stated the same was true when she became a Judge, however he ironically observed that the defense bar felt the same way. Miller asserted that Judge O’Brien had the full support of the General Assembly. He called her the best candidate for the Court of Appeals and was clearly pleased to be a part of her appointment process. “Her elevation is a loss to Prince William County but an absolute gain to the commonwealth of Virginia.”

John D. Whittington, Esq., addressing the Court of Appeals Bench, said, “Mary Grace O’Brien is the type of judge and the type of person that you will all be happy to call your colleague and your friend. Judge O’Brien was administered the Oath of Office by the Honorable Herman A. Whisenant, Jr., Retired Judge, 31st Judicial Circuit. In her opening remarks, Judge O’Brien thanked Senator Colgan and Delegate Miller for their support, saying, “I appreciate the responsibility that they have placed in me, and I will work hard to do a good job as a judge of the court of appeals of Virginia.”

“For 30 years this courthouse has been my home, I wonder if sometimes my colleagues on the circuit court bench wonder when I’m going to move out! I was extremely lucky to be hired by Paul Ebert. He took a chance on me because I had no trial experience, and not a lot of life experience. Paul was a wonderful employer and mentor. It was an excellent office.”

“It was my great good fortune to serve on both the Juvenile and Circuit Court Benches in PWC and in both courts, my colleagues were bright, thoughtful, dedicated jurists on the bench that became great friends off the bench. The work of the courthouse is not just done by the lawyers and the judges. There are two other agencies that deserve recognition and thanks from me today. The courtroom clerks that worked with me in both Juvenile and Circuit court, are hardworking. I call them the brain trust. And the sheriff’s deputies that have served as my deputies over the years are attentive, professional and we are lucky to have them.”

“As judges we are not important, but we make important decisions; decisions that affect people’s lives, their liberty and their livelihood. It is imperative in my view, therefore, that judges appear professional and courteous to the litigants that appear before us and that we exercise judicial restraint, and apply the law as it is written, not as we would like it to be, and that we give every case the time and attention that it deserves. It is hard work, worth doing well.”

A reception, sponsored by the Prince William County Bar Association followed the investiture.