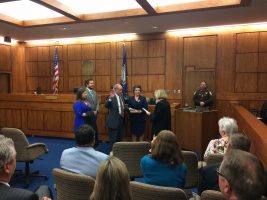 On May 4, 2018, The Prince William County Bar Association sponsored the investiture of the Honorable James A. Willett to the Circuit Court in Virginia’s 31st Judicial Circuit, which encompasses Prince William County and the cities of Manassas and Manassas Park.  Judge Willett was appointed to an eight-year term by the General Assembly during the 2018 session to fill the vacancy created when the Honorable Craig D. Johnston retired.

James Willett received a BA from Monmouth College in 1974, a MPA from The Pennsylvania State University in 1975 and a JD from the University of Richmond in 1978.  His practice was primarily in criminal law, both for the prosecution and defense, and he served the last 31 years as a prosecutor in the Commonwealth Attorney’s Office in Prince William County, where he tried many high-profile cases.

During his professional career, Willett received numerous awards, including the Arthur W. Sinclair Professionalism Award, the Warren Von Schuch Distinguished Prosecutor Award, the Excellence Award from the Virginia Homicide Investigator’s Association and the Trial Advocacy Award from the Association of Government Attorneys in Capital Litigation.  He is also a fellow of the American College of Trial Lawyers, an organization which includes only the top one percent of trial attorneys in North America.

Zauzig reminisced about meeting Willett the first day of law school, the close, enduring friendship they developed, and how they both knew they wanted to be trial lawyers, adding that “as an advocate, there’s no one tougher.”  “What do I know about Jim Willett?  He’s smart, tough, fair, loves the law, loves trial by jury, understands what justice feels like, and is a man of great character.”

Ebert referred to Willett as a student of the law and a student of trial advocacy and mused that he didn’t know how the Commonwealth Attorney’s Office would “get along without him.”  “The best thing about Jim is that he is honorable and fair.  He lets you know where you stand.”  And he believes people should be treated fairly regardless of their station in life.

Senator Surovell, who spoke on behalf of the entire Prince William Delegation, talked a great deal about the responsibilities of Circuit Court Judges and how Willett’s temperament, knowledge, wisdom, experience and character were factors in his appointment.  Surovell also acknowledged that Willett had incredible support from the PWC Bar, not only from his fellow prosecutors, but also from the defense bar, and that he has set the standard for judges to follow.

The Honorable Mary Grace O’Brien, of the Court of Appeals of Virginia, administered the Oath of Office.  She, too, was a former prosecuting attorney from the PWC Commonwealth Attorney’s office, and a colleague of Willett’s for many years before her appointment to the bench.

Judge Willett thanked the Legislative Delegation for their support; thanked Paul Ebert and Rick Conway for their team work over the years; thanked Tony Kostelecky and Brad Marshall for explaining the political process; and thanked Earnestine Jenkins for her support at the General Assembly.

He concluded by acknowledging the most important men in his life.  His father, his brother Mike, his friend Paul Cushman, and his friend Judge Will Jarvis.  He called them “good men” because they modeled “integrity, strength, a kind heart, doing the right thing and listening.”  And he vowed to try to be that type of judge.