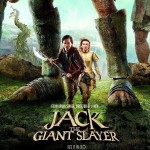 I knew “Jack the Giant Slayer” was going to be a BIG deal, but I had no idea just how far the beanstalk went. I admit I was skeptical after seeing “Hansel and Gretel” a few weeks ago which had no bread crumbs. Then, the first line of this movie is “’fee-fi-fo-fum”, and they had me at Fum.

The trailer made it look like an epic battle, and it is, but it’s also a story about a farm boy who wants to help his uncle and impress a girl. Young Jack,  played by Nicholas Hoult ( Warm Bodies and About a Boy) takes the old horse to town to sell it for food and comes back with (spoiler alert) magic beans. What will we do when all the farms are gone and we have no more farm boys? Will the hero of our movies be Jaden, the Starbucks barista?

Jack also brings home the memory of beautiful, Isabelle, played by Eleanor Tomlinson (Alice in Wonderland).  Somehow these two kids wind up at the top of this big green thing along with the King’s most trusted man, Elmont (Ewan McGregor from Big Fish). Oh, and I almost forgot to mention the villain Roderick – played by the always great Stanley Tucci (Julie & Julia) who has a way with giants and for once has great hair in a movie. Yes, there are giants, led by General Fallon (voiced by Bill Nighy of Pirates of the Caribbean) who are awesome and could have made it to the Super Bowl last year (apologies to Eli Manning). My favorite was Fumm, who was voiced by Ben Daniels (House of Cards) but looked exactly like my fifth grade teacher.

I may have been under the spell of 3-D Imax, but it all worked for me. Director Bryan Singer (X-Men) has served up a nice telling of this English fairy tale. The story, Jack, the girl, and the visual effects supported the characters and the story and did not overtake the fable. There were moments it felt like “The Princess Bride,” but “Jack the Giant Slayer” kept its own tone, and stayed true to its roots.  I give this movie 3 ½ stars out of 5 and encourage you to plant yourself in front of this movie and let it take you somewhere – over the rainbow (oops, that’s next week).